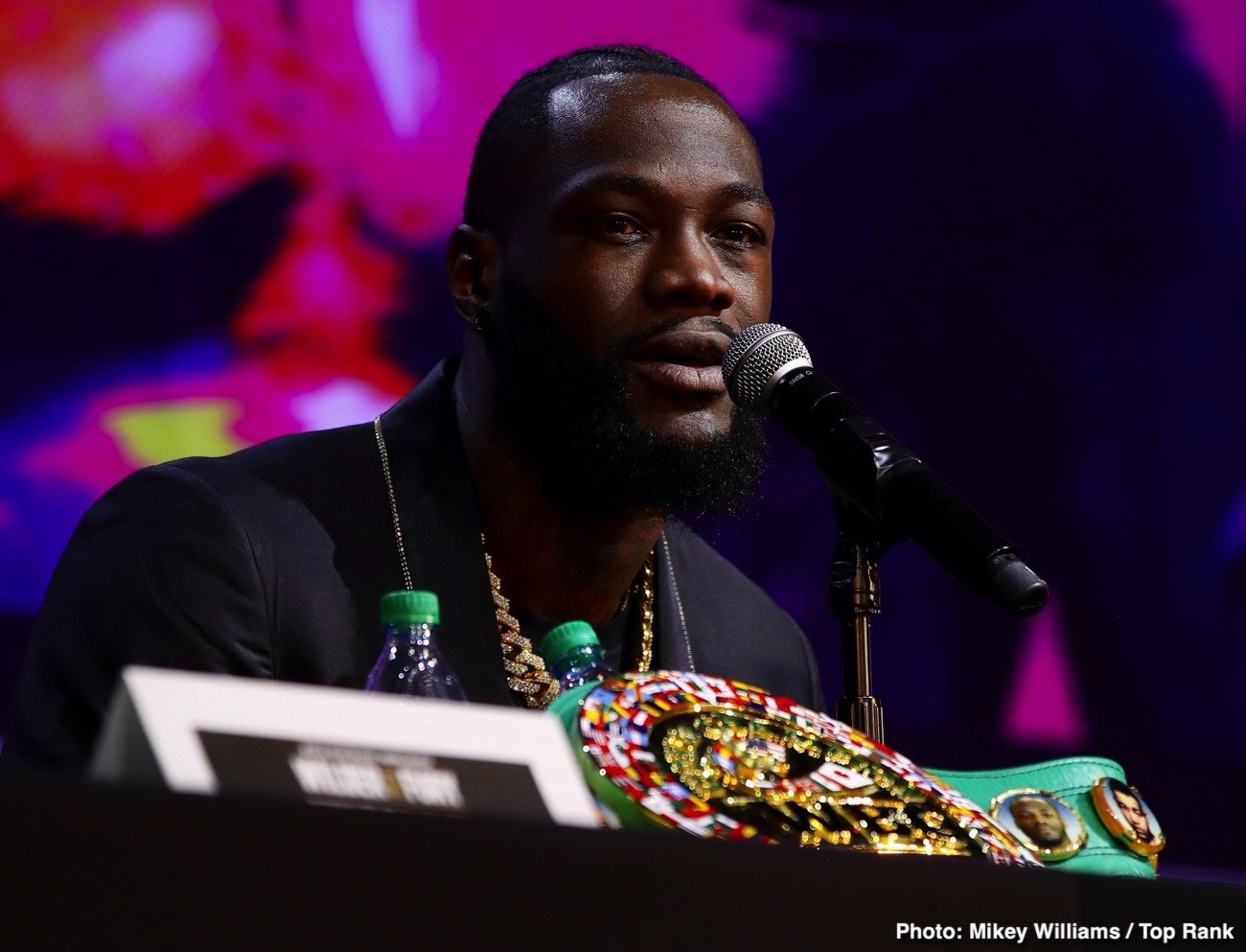 By Robert Addams: Deontay Wilder wants fans to be totally dialed in and 100% focused when his rematch with Tyson Fury takes place on February 22, because the fight isn’t going to last long.

Wilder (42-0-1, 41 KOs) says he’s learned how Fury reacts to punches thrown at him, and he can read him like a book. So when Fury tries using his feints and his upper body movement to avoid shots, Wilder is going to clock him with a right hand to the head.

Fury is predicting a 2nd round knockout of Wilder. Most boxing fans think Fury is being less than truthful though, seeing that he didn’t show any power last time. When hit by Wilder, Fury is expected to run around the ring and fight in a boring safety-first manner like last time.

Wilder and Fury (29-0-1, 20 KOs) will be going head to head on ESPN and Fox pay-per-view on February 22 at the MGM Grand in Las Vegas, Nevada. The first time they fought, Wilder knocked Fury down twice, but had to settle for a 12 round draw in December 2018. Wilder says he’s not going to let that happen again. He wants to knock Fury out to where he can’t get up, even with a long count by the referee.

Wilder to fans: Don’t blink or you’ll miss it

“Hey, I’m going to admit that I’ve never been good with predictions, but you know me, like the last time, don’t blink,” said Wilder to BT Sport on his prediction for Fury. “Just don’t blink. Prepare yourself. Go to the bathroom. Get all your food, and everything you’ve arranged for this fight.

“Make sure you get there on time as well too, because this is a fight that you don’t want to miss,” said Wilder in advising fans to be ready to see a quick fight. “He’s [Fury] facing the most dangerous fighter in the world, and the hardest hitting fighter in boxing history, period. One blink of an eye, it’s over. See, you missed it,” said Wilder.

Fury is hard to hit in the early rounds of his fights, and that may prove to be the case in the rematch with. That doesn’t mean Wilder can’t time him, and catch Fury with a big right hand that separates him from his senses. Fury had  a slight edge in punches landed in the first fight, but Wilder landed the more powerful shots.

Fans mistakenly think that Fury got the better of Wilder with volume punching last time, but that’s not the case. Fury mostly hit, and moved all night. He wasn’t throwing combination punches, because he was getting nailed when he would throw more than one shot at a time.

Fury doesn’t believe he can knock me out – Wilder

“Because I can feel his energy. I have a sixth sense,” said Wilder to BT Sport when asked why he doesn’t believe Fury really thinks he can knock him out. “To really believe that? I don’t believe he really thinks he can do that. When was the last time he knocked someone out from the top level? I’ll just do what I did the first time. I understand the science of the body.

The head is not meant to be hit in the first place. So while we praise him for getting up, healthwise, it’s saying, ‘Don’t do that no more.’ Your body doesn’t want to go through that trauma to the face, brain shaking, and you doing down unconsciously, not knowing how you got up. Not knowing what’s going on. All you see is a man counting in your face. That’s scary.

If you close your eyes right now, and you visualize yourself getting hit. Your mind is in delusion, and your mind has gone somewhere. You don’t know where it’s at. It’s back what you did yesterday…you come back to your senses. It’s unhealthy. Definitely, hands down,” said Wilder when asked if he believes he won the first fight with Fury.

If Fury’s cut reopens over his right eye, Wilder will go after him to finish him off quickly. Fury needed 47 stitches to close a cut over his right eye in his last fight against Otto Wallin last September. He reportedly had plastic surgery on the area of the cut, and it supposedly is as good as new. That’s doubtful though. If Wilder lands a hard right hand on that eye, it’s going to open, and cause Fury a lot of problems.

Wilder plans on being more patient against Fury

“Be more patient. I gotta be more patient, and settle in,” said Wilder when asked what he needs to do differently in the rematch to beat Fury. “With my energy, I was so excited at that moment in time. People don’t understand that boxing isn’t our first or second nature sport. We have so many different distractions over here, and so many different sports that people have an interest in that takes away sometimes.

When people didn’t know who the heavyweight champion of the world was for 10 years, and you’re trying to come back and build that for your country, you already know that’s a hard task than in the first place. To make history again, it’s going to be remarkable,” said Wilder.

Being patient is the key for Wilder, because he was anything but that in his previous fight with Fury. Wilder was throwing wild shots, and looking flustered by the movement Fury was using. In Wilder’s last two fights since then, he appeared calm in knocking out Luis Ortiz and Dominic Breazeale.

Even with Ortiz winning a lot of rounds, Wilder never showed frustration or  a sense of urgency. As long as Wilder stays calm, Fury’s chances of making it out of the fight on his feet are slim. The Wilder that knocked out Ortiz last November will stop Fury.

Wilder believes that Fury can’t take his power this time as well as he did in their previous fight. He thinks that Fury’s brain is telling him that he can’t hit again like he did in the 12th round when he was knocked unconscious by Wilder.