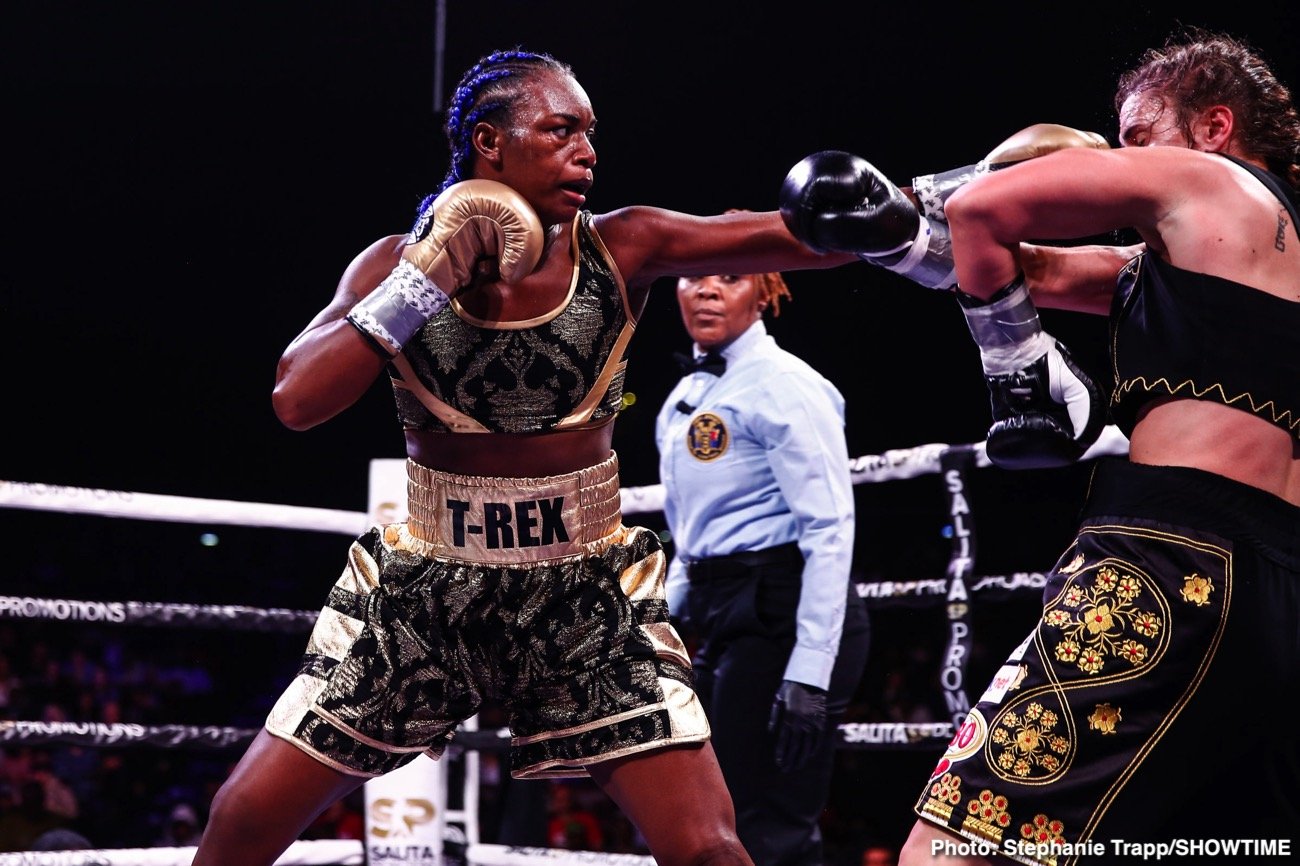 Claressa Shields made history yet again by claiming the WBC and WBO 154-pound world championships with a dominating unanimous decision over Ivana Habazin Friday on SHOWTIME from Ocean Casino Resort in Atlantic City.

Shields became the fastest fighter in history, male or female, to win world titles in three different weight divisions, surpassing the record of Vasiliy Lomachenko and Kosei Tanaka, who both accomplished the feat in 12 fights. The near-shutout was scored 99-89, 100-90, 100-89.

Shields (10-0, 2 KOs) overpowered Habazin from the opening bell, utilizing a strong jab and a steady diet of body shots that left the Croatian mostly in defensive mode throughout the 10-round fight. In the sixth round, a series of body shots forced Habazin to take a knee in the first knockdown of her career. It was also the first knockdown for the two-time Olympic Gold Medalist and undisputed middleweight world champion in her professional career.

Following the knockdown, Habazin continued forward but did so without throwing many punches. Habazin (20-4, 7 KOs) threw just 285 compared to 516 for Shields, who also connected on 38 percent of her power shots compared to just 18 percent for Habazin.

In the co-featured bout, welterweight sensation Jaron Ennis scored his 15th consecutive knockout with a dominating fourth round TKO over the durable Bakhtiyar Eyubov. 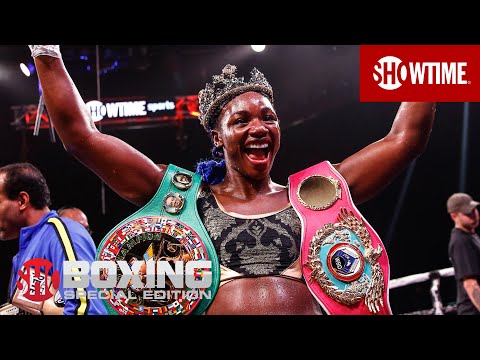 The switch-hitting Philadelphia native came out with a blistering pace in the first, switching from southpaw in the opening minute while displaying his signature power and hand speed. An onslaught of perfectly timed punches floored the normally durable Eyubov for the first time in his career midway through the opening round. Eyubov (14-1-2, 12 KOs) got up but was dropped against just 20 seconds later as the torrid pace continued. Eyubov survived the round and Ennis (25-0, 23 KOs) took his foot off the gas a bit in the second, but the unbeaten welterweight still landed at will against Eyubov, who continued to press forward.

Prior to the fourth round, Commissioner Larry Hazzard warned Eyubov that he would stop the fight if he didn’t see improvement. With Eyubov still pressing forward but eating dozens of punches, referee Earl Brown stepped in to stop the fight at :34 at the instructions of the Hazzard.

Ennis now has 23 knockouts in 25 fights and 13 knockdowns over his last six fights. Through four rounds the incredibly effective Ennis landed 47 percent of his power shots.

“We knew he was coming to fight and bring pressure so we mixed it up,” Ennis said. “He was a good fighter but he wasn’t really that strong. I was getting hit a little too much but that’s how we did it to get the knockout.

“We were just setting him up for power shots. I just had to calm down, that’s all. I was too hyped. Once I calmed down and got into my rhythm that was it.

“He was taking a lot of punishment. He definitely was a great fighter though. I appreciate him taking the fight because a lot of guys don’t want to fight me.”

With another dominating performance, Ennis now sets his sights on the upper echelon of one of boxing’s deepest and most exciting divisions.

“We have been wanting all the guys,” Ennis said. “They keep running. They can’t run no more. I’m right here.”

Cederroos (7-0, 4 KOs) was more active from the opening bell, throwing 747 total punches over 10 rounds compared to 432 for the slightly more effective Napoleon Espinosa (12-2, 7 KOs). But the difference in the close scorecards was a second round knockdown that Cederroos registered with a perfectly timed check left hook in the closing moments of the second. It was the first knockdown of Napoleon Espinosa’s career and ultimately the deciding factor in the scorecards.

“I’m so happy. I showed that I can box and take a war,” Cederroos said. “But when I relaxed the punches just came. It feels so wonderful. Alicia was a great opponent.”

Napoleon Espinosa was game and hurt the Swedish Cederroos multiple times but she was largely unable to get inside against her taller opponent who consistently landed the bigger punches from a distance.

“I didn’t think I lost. I thought that it was fairly close but I thought I was ahead,” Napoleon Espinosa said. “It is what it is, but I don’t think that I lost this fight.

“I know she was strong, but I wanted a tough fight. I know that Elin is an athlete. I don’t feel that I lost. I feel like it was close.”

Napoleon Espinosa had been hoping that a win would position her for a 2020 fight with Claressa Shields at middleweight with all four of Shields’ 160-pound titles on the line.

“Congrats on the fight with Shields because that was what I was looking forward to,” Napoleon Espinosa said.