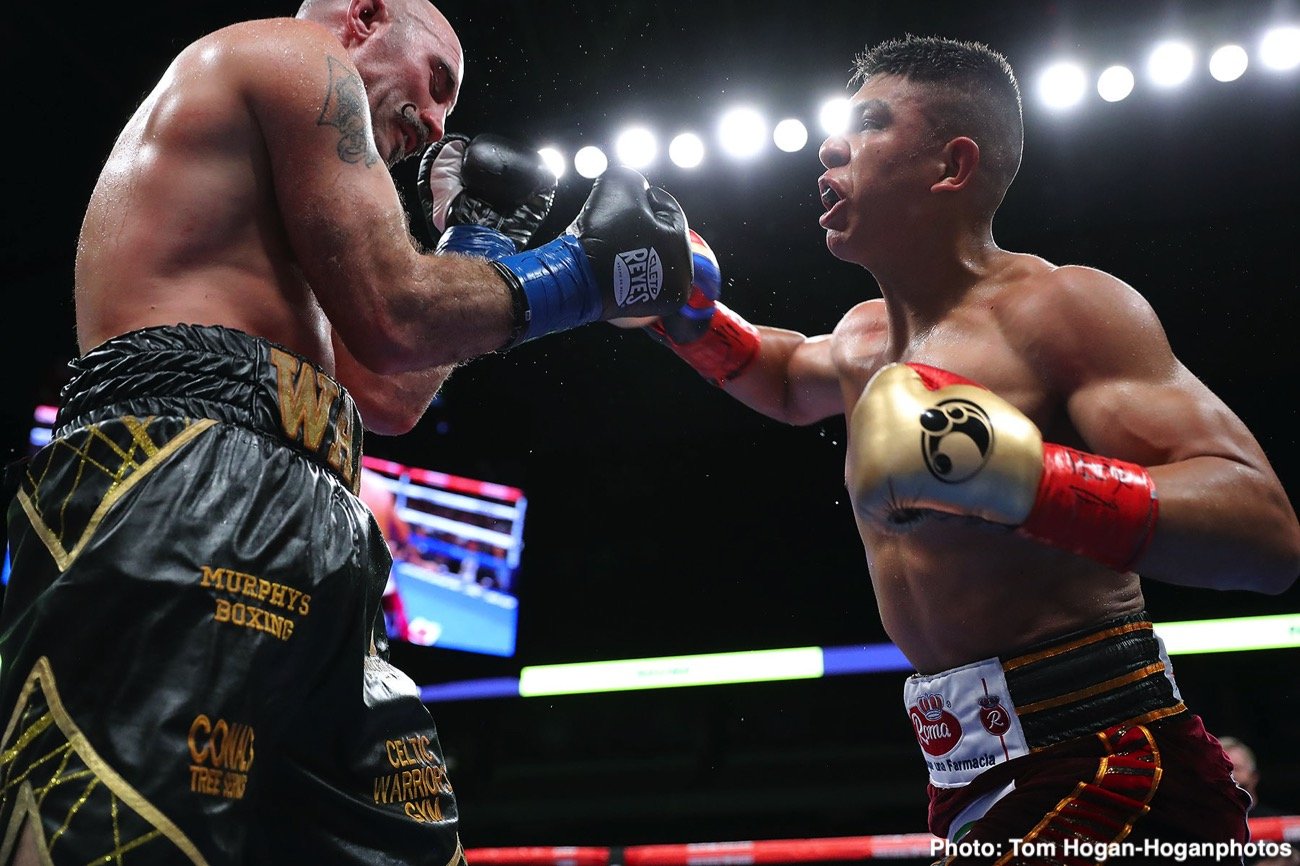 DAZN kicked off the new year at the Alamodome on Saturday night, where Jaime Munguia (35-0, 28 KOs) won his middleweight debut with a stoppage over Gary ‘Spike’ O’Sullivan (30-4, 21 KOs). O’Sullivan’s corner threw the white towel in the 11th Round following powerful combinations and vicious body shots by Munguia, that ultimately lead to his TKO victory. In the co-main event, Alejandro Jimenez (13-0-1, 9 KOs) upset Franchon Crews Dezurn (6-2, (2 KOs) in a thrilling split decision victory to become the new WBC & WBO Female Super Middleweight Titlist.

“I wasn’t sure because when I had him hurt that’s when he would hit hard, so I had to let him get tired then find the finish. I would give myself an eight or nine. I had to do some more things, but will take this fight by fight.

“I was confused whether to attack or not, but thanks to my corner and Robert Morales. I think I did better at 160. I feel like I wore down less cause of the weight cut. I felt I threw more punches, more combinations, and it made the difference.

“I want to fight the best in the division, Golovkin, Canelo, or Charlos.”

“I was taking my time, and studying, that was part of the strategy. We had a great preparation, I feel great, feel awesome, have a great team, and come from the best country.

“I looked past all the hard work. The time I wasn’t able to eat during New Years and Christmas. The hard worked paid off. All the time I was away from my daughters, now to be champion at super middleweight is great.

“This was a new division for me,” said Jaime Munguia. “I felt stronger and with more conditioning, I just needed to adjust my speed to feel fully comfortable. I would give my performance a 7 or 8 because I needed to do a few more things, but we will get there fight by fight.”

“I was confused about whether to attack or not to attack. Sometimes I thought I had to attack, but I didn’t. But thanks to my corner and Erick Morales I was able to get him. On the last rounds, I was more attentive, even though I still got punched a few times.”

“I would like to fight the best of this division: Canelo, Golovkin, or the Charlos. I know they have more experience, but I look forward to those fights. I want to thank everyone in San Antonio and Viva Mexico.”

“I feel disappointed,” said Gary O’Sullivan. “I was hoping I could win, but I guess I wasn’t good enough to take him down. I just want to go home, spend time with my family and rest. I’ve been away for too long and I think it’s time for me to go and enjoy some time with them. I have made a great sacrifice for this fight, but it’s OK.”

In the co-main event, Alejandra “La Tigre” Jimenez (13-0-1, 9 KOs) of Mexico City, Mexicocaptured the WBC and WBO Super Middleweight World Titles against Franchon “The Heavy-Hitting Diva” Crews-Dezurn (6-2, 2 KOs) of Baltimore, Maryland via majority decision in a 10-round fight. Jimenez won with scores of 97-93 and 98-92, while one judge scored 97-93 in favor of Crews-Dezurn.

“I feel great! This is amazing,” said Alejandra Jimenez. “I’ve accomplished one of my biggest dreams. I’ve been away from my family for a long time. This win is for them, my team, and my country, particularly my Cancun that I love so much.”

“I’m heartbroken, but I’ve been here before,” said Franchon Crews-Dezurn. “This is a learning experience; I have to go back and regroup with my team because I don’t think a decision on my favor was that far. This was a tough fight for me. This was my 8th fight, but I’m still learning and growing in the ring. I thank Golden Boy for the opportunity to show my skills in front of a Hispanic crowd and new people that haven’t met me before. I’m glad they were entertained. This wasn’t the outcome I wanted for my first fight of the year, but I will be back.”

“The atmosphere here in San Antonio is amazing,” said Hector Tanajara. “It feels greats to be home. This was my first pro fight here, and I felt like I gave my people a good fight. I started the fight boxing but finished it giving it my all. That’s the Mexican blood in me.”

Joshua “El Profesor” Franco (16-1-2, 8 KOs) of San Antonio, Texas defeated Jose Burgos (17-3, 14 KOs) of Guadalajara, Mexico via technical knockout in the ninth round of a super flyweight fight originally scheduled for 10 rounds. Franco won with time of 2:13 of the aforementioned round.

“I feel incredible winning at my hometown,” said Joshua Franco. “It is my first time fighting here, and I performed well. Words can’t describe how I feel right now; I feel really happy to see my friends and family in the crowd tonight.”

Tristan “Sweet T” Kalkreuth (4-0, 3 KOs) of Duncanville, Texas beat Blake Lacaze (4-8-1, 2 KOs) of Monroe, Louisiana via knockout in the first round in a four-round cruiserweight fight. Kalkreuth won time of 1:50 of the aforementioned round.

“There is not a lot to say since it was a first-round knockout,” said Tristan Kalkreuth. “All glory to God and gracias to San Antonio. I’m very happy I am in this position where I can inspire other kids.”

“I’m highly blessed,” said Travell Mazion. “All glory to God. If it wasn’t for God, I wouldn’t be standing here right now. I feel amazing. I didn’t really expect it to end it that fast. I was ready to cry on the ring because I’m a champ! I am a champ! I did it! All glory to God.”

George Rincon (10-0, 7 KOs) of Carolton, Texas defeated Diego Perez (13-10-1, 11 KOs) of Buenos Aires, Argentina via knockout in the first round in a welterweight bout originally scheduled for six rounds. Rincon won with a time of 2:53 of the aforementioned round.

“I’m feeling OK. I took my time,” said George Rincon. “When I was punching him, I could feel a K.O. was coming soon. I didn’t want to finish fast, so that’s why I took my time. I threw a jab and when I landed a left punch, that was it.

Hector Valdez (12-0, 8 KOs) of Dallas, Texas stopped Luis Rios (25-6-1, 17 KOs) of Felipillo, Panama in the third round via knockout in a super bantamweight fight originally scheduled for eight rounds. Valdez won with time of 2:59 of the aforementioned round.

“I stuck to the game plan. I wanted to get some rounds in, so we started a little slower, but overall, I stuck to my game plan and came out victorious,” said Hector Valdez. “Today is a good day.”

“My opponent was tough; he is a hell of a fighter, but I knew that. These are the type of fights that I need because it boosts my ego.”

“I’m happy to start my journey with Golden Boy,” said James Wilkins. “This is the first of many good fights that will happen. I have so much to learn and grow. As a young fighter, I know that there is so much more to the journey. Each fight is going to make me grow and learn more.”

“My opponent was as tough as I thought he was going to be,” said Alex Martin. “He got a lot of boxing and a lot of heart. He put up a good fight, and congratulations to him and his team too.”

Boxing on DAZN returns Thursday, Jan. 30 when WBO Middleweight Titlist Demetrius Andrade defends his title against Luke Keeler in the main event of a stacked card live from Miami ahead of the big game.