‘Anthony Joshua has to prove himself again’ – Tyson Fury 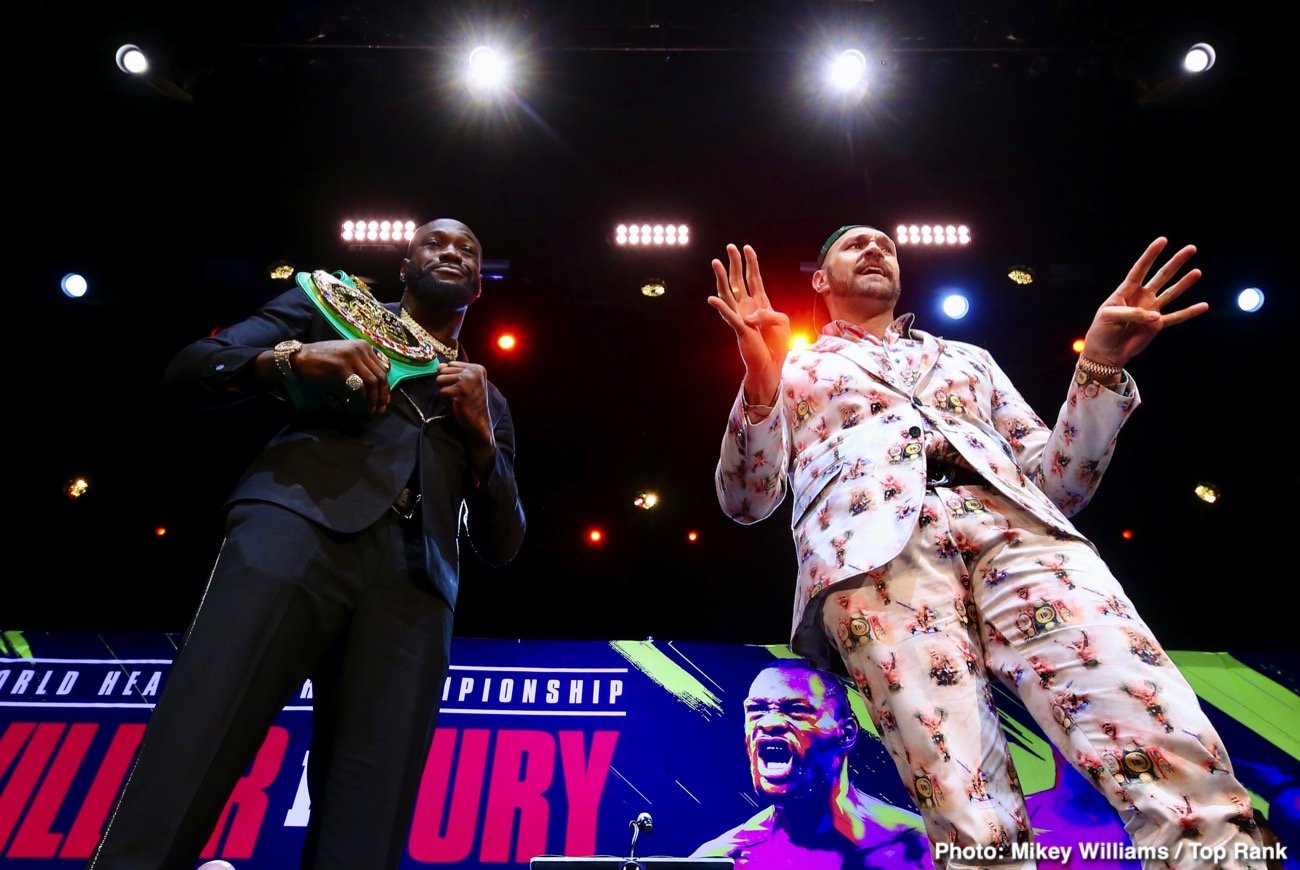 By Dean Berman: Tyson Fury says Anthony Joshua’s loss last year to Andy Ruiz Jr. has eliminated him in the running to decide who the #1 heavyweight in the division is. Fury has an elitist attitude now for some reason, and is excluding Joshua from being considered as one of the best. Tyson is starting to sound like a snob at 31.

The only thing Joshua lacks right now that Fury and Deontay Wilder possesses is an unbeaten record. You can argue that Fury and Wilder are more confident than Joshua, but that’s not necessarily a good thing. We saw what overconfidence did to Joshua when he fought Andy Ruiz Jr.

The performance by Joshua wasn’t good enough Fury’s high standards, and he’s now dismissive of him as one of the best. Until Joshua proves himself against a better fighter, he can’t be part of the upper level club, as far as Fury is concerned.

Fury NOT including Joshua in his club

“It was a three horse race, he got eliminated, it’s still a two horse race now,” said Fury about Joshua. “Two horses [Deontay Wilder and Fury], and there’s only going to be one standing after this fight,” said Tyson about his fight with Deontay.

What Fury is forgetting is that styles make fights, and Joshua just met up with a bad style for him in his first fight with Andy Ruiz Jr. It doesn’t mean that Joshua can’t possibly beat Fury or Wilder. This is heavyweight boxing, and anything is possible. It comes down to which guy lands first in some cases.

Joshua took the wrong approach to the Ruiz fight to begin with. He judged him by his chubby physique, and failed to recognize the talent that he had brought with him to the fight. Ruiz was an excellent amateur, and in many ways better schooled than Joshua before he turned professional. That’s hard for some boxing fans to understand, considering that Joshua won a gold medal in the 2012 Olympics. Ruiz came out of the amateurs with more technical skills than Joshua, but obviously not the same body type.

Joshua won the gold by out-slugging his opponents, and getting lucky with the scoring by the judges in 3 of his fights.

Going into their ight last June, Joshua saw that Ruiz had been beaten by one of his former opponents, who he’d easily beaten, and he likely figured it would easily beat him.

Joshua used the Klitschko style against Ruiz Jr. in rematch

The style that Joshua used, which was a carbon copy of the old punch & grab style employed by Wladimir Klitschko for many years kept him from redeeming himself the way he needed to in order to win back his boxing fans. Joshua’s performance in beating Ruiz was one like watching Gene Tunny fight. It wasn’t spectacular to watch, but Joshua got the job done to get the ‘W’.

Fury and Wilder went to war in December 2018, and ended up with their fight being scored a 12 round draw. Both guys claim they should have won, but the fact of the matter is there’s no such thing as ‘should’ in boxing. You either won or you didn’t. The judges decided the fight was a draw, and that’s how it stands in the record books. Ultimately, that’s the only thing that counts.

Joshua already beat Ruiz last December, so it would be pointless to fight him again. In Joshua’s next fight, he’ll likely be defending against his IBF mandatory Kubrat Pulev in April or May. It’s still not been announced, but that’s the fight that is expected to happen next.

Joshua will need to make quick work of Pulev

The 38-year-old Pulev isn’t talented enough for Joshua to redeem himself in the eyes of Fury. It’s going to take better opposition Pulev, and Joshua is going to have to return to his old fighting style to get back to the top. Before Joshua lost to Ruiz, he’d always been a boxer-puncher known for his exciting fights.

All that changed last June after the 268 lb Ruiz Jr. knocked Joshua down 4 times en route to making him quit in the 7th in New York. The defeat was so painful for Joshua that he made drastic physical changes to his physique, and changed the way he fights. He went from fighting like Lennox Lewis to fighting like Wladimir Klitschko.

Sometimes when fighters fail big, they’re so damaged mentally from the defeat that they never go back to fighting with the same aggression that they once did. Invariably, that’s what sinks most of their careers. A mentally beaten fighter no longer possesses the confidence in themselves that they once had, and they tend to fight scared.

In boxing, you can’t fight timidly and be successful at the upper levels of the sport. Look at Fury. He fought with courage and took the fight to Wilder last time, and almost beat him. Fury came back strong after the Wilder fight to look good in his last two matches against Tom Schwarz and Otto Wallin. In both of those fights, Fury looked as fearless as ever, and dominated them.

“I thought I won the fight last time and didn’t get a decision,” said a terribly jadded sounding Fury. “So what’s to say I’m going to get it again? So if I knock him out then the decision’s made. Yes. It’s a completely different fight. I’m looking for a knockout, that’s it. I’m a puncher too, 20 knockouts out of 29 wins,” said Fury.

For an intelligent heavyweight, Fury sounds very immature, and resentful that the judges didn’t give him a win in his first fight with Wilder in 2018. Fury seems childish, and appears to have a sense of entitlement. The fact that Fury doesn’t respect the judges is disturbing, because they deserve respect.

Fury will have a hard life if he can’t let other professionals do their job without him invalidating their decisions, and resisting reality by acting as if things went the way he wanted them do. It’s childish outlook Fury has.