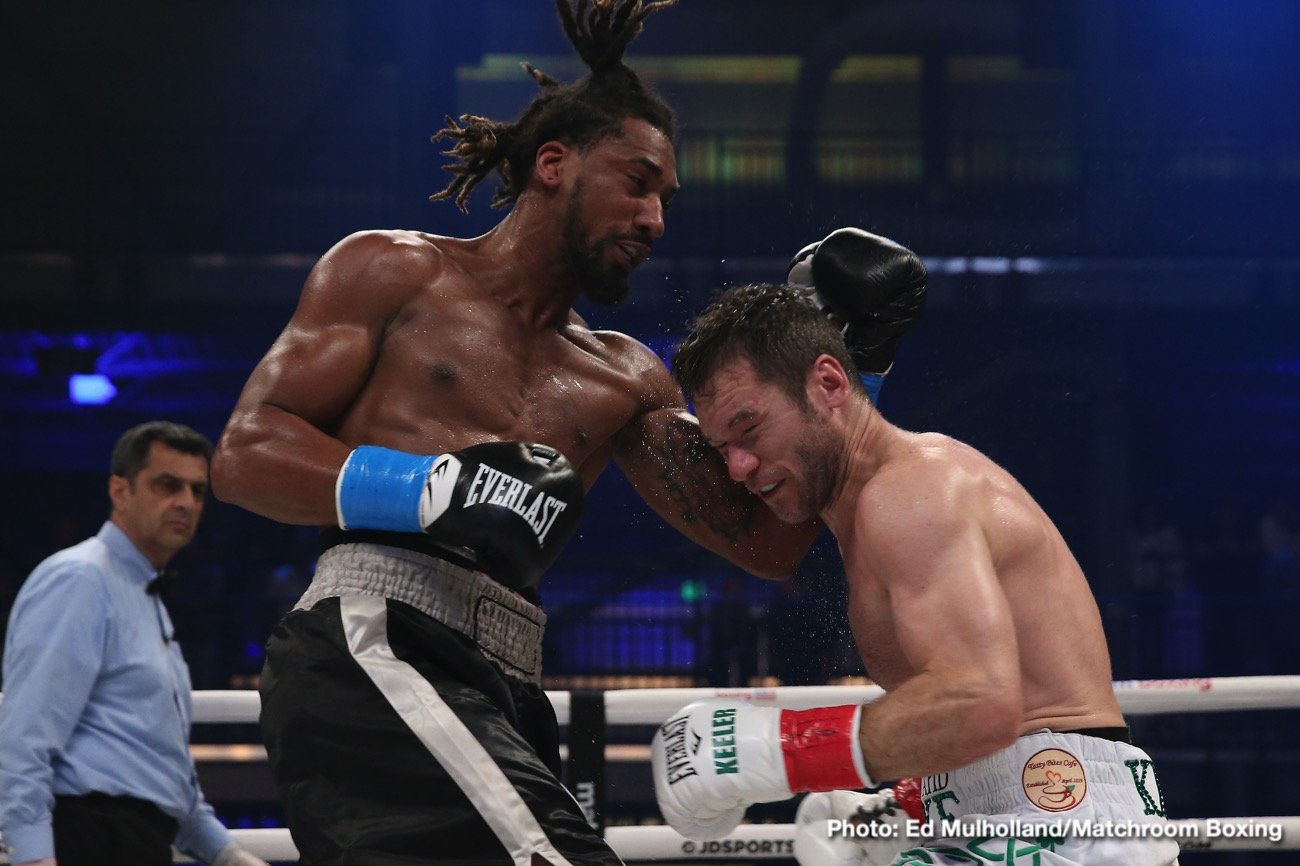 By Jim Maltzman: Moments after defeating Luke Keeler (17-3-1, 5 KOs) in an emphatic fashion, WBO 160-lb champion Demetrius ‘Boo Boo’ Andrade (29-0, 19 KOs) called out the talented world champions Jermall Charlo and Billy Joe Saunders to face him in his next fight on DAZN.

Demetrius, 6’0”, knocked the 32-year-old Keeler down in rounds 1 and 2, and then took him out with a storm of power shots in the 9th last Thursday night at the Meridian at Island Gardens in Miami, Florida.

Keeler refused to go down, and the referee had to stop the match when he too hurt to protect himself from the southpaw Andrade’s hard left hand shots that he was repeatedly hitting him with. Despite losing, Keeler gave a good account of himself, showing that he wasn’t going to quit regardless of how overmatched he was.

Not willing to give up, Luke was taking the fight to the bigger, stronger Andrade throughout the contest. You’ve got to give Keeler MAJOR respect for never giving up, and showing no fear of Andrade. It was a courageous effort in showing that even an outclassed fighter can be competitive against a better talent if they’re willing to fight hard, and not give.

The only thing that prevented Keeler from having a shot at winning was his lack of punching power. If he had that, Andrade would have had problems.

Andrade’s promoter Eddie Hearn of Matchroom has the will, the interest and most importantly the power to make the fights between him and the unbeaten Charlo (30-0, 22 KOs) and Saunders (29-0, 14 KOs). However, there’s only so much a promoter like Hearn can do to make a big fight between those guys.

Ultimately, it comes down to whether Charlo or Saunders fancies the job of facing one of the best middleweights on the planet in 2008 Olympian Andrade. It might take a huge offer to get Charlo to agree to face Andrade, because right now he’s now showing signs of wanting to make that fight. 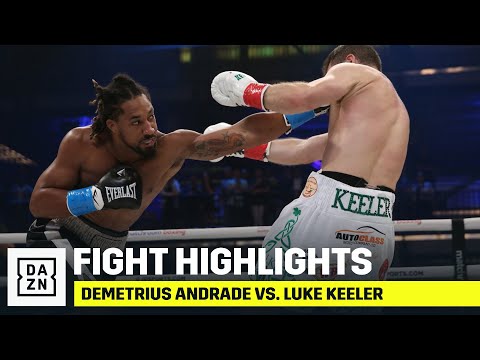 Andrade could have helped himself last night if he’s looked impressive against Keeler, but that failed to happen. Unfortunately, Andrade was missing with his best shots, and looking sloppy all during the contest.

Keeler is a good scrappy little fighter, but it’s difficult to imagine him making it out of the first round against Gennadiy Golovkin, Canelo Alvarez or Jermall Charlo.

“I’m not giving up on that. Eddie Hearn sent the offer and didn’t get a response. If they want to send an offer this way, we will respond. Let’s get it on, Jermall. The boogeyman is here, baby.”

WBC middleweight champion Charlo is his promoter, but he fights on a different platform. He’s with SHOWTIME, and putting together a fight with him could be complicated to say the least. Hearn is willing to let Andrade fight on Showtime if that’s the only way to make the fight with Charlo happen.

It’s unclear what DAZN feels about this. Andrade is an excellent fighter, but he doesn’t have the same popularity that their big stars Canelo Alvarez and Gennadiy Golovkin both possess. Perhaps they would be willing to allow Andrade to fight Charlo on Showtime if he’s not interested in fighting him on DAZN.

Ideally, a situation where the Andrade vs. Charlo fight can be shown on both platforms would be the best way to make this fight happen between these two unbeaten middleweight world champions. Again, it’ll come down to Charlo whether he wants to face Andrade.

Up to now, it doesn’t appear that Charlo fancies the fight with him for whatever reason. Whether it’s Andrade’s lack of popularity or his crafty style of fighting, Charlo hasn’t shown the motivation to get in there with him yet.

It obviously doesn’t help that Andrade is a southpaw. Those types of fighters generally aren’t sought out for fights due to the difficulties they present to fighters that use the right-handed stance [orthodox]. 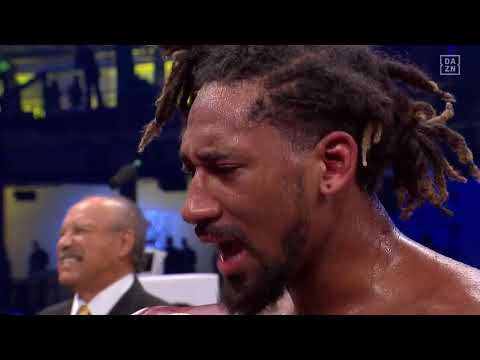 Andrade calls out Saunders at 168

“Listen, I wanted to go up to 168 to fight Billy Joe ‘Joke-A–’ Saunders and that’s what I am looking to do,” said Andrade immediately after dispatching Keeler. “Since Eddie [Hearn] has that big checkbook, that big bank, give Billy that check too so I can whoop his a–”

Canelo, 29, gave up his WBO light heavyweight title that he won on November 2 in stopping champion Sergey Kovalev, and he’s moving down in weight. Most believe it’ll be easier for Canelo to move down in weight eight pounds to the 168-lb division to face Saunders or Callum Smith than it would for him to return to 160.

With that said, Saunders is in a good position to land the fight with Canelo. Unfortunately for Andrade, he’s in the wrong place right now at 160, as Canelo isn’t expected to return to that division in his next fight.

Although there is a chance that Canelo could return to 160 to face WBA ‘regular’ champion Ryota Murata (16-2, 13 KOs), but he doesn’t present the same kinds of problems that a talented guy like Andrade would for the Mexican star.

In some ways, Andrade hurt himself with his performance against Keeler last night. After dropping Keeler in the first 10 seconds of the first round, Andrade should have been able to stop him right away. However, Andrade looked gangly, uncoordinated and entirely inaccurate with his follow up shots.

Andrade was all over the place, throwing wild shots, shoving Keeler hard, and roughing him in an attempt to get him out of there. Andrade’s form deteriorated to the point where he looked like he was in a street fight with a hapless pedestrian.

It was a bad look for Andrade, given that the spotlight was on him last Thursday night with his contest with Keeler being in the headliner spot on DAZN. Andrade should have been able to stop Keeler in the first three rounds, if not in round one.

What the fight showed clearly is Andrade is one of the worst finishers in the middleweight division by far. Not only did Andrade fail to stop Keeler in the first, he couldn’t do the job in the 2nd round as well. Andrade knocked Keeler down with a hard left hand in round 2, and he failed to land a clean enough punch after the British fighter got back up to get him out of there.

It was the situation as in the first round. Andrade was too eager, and he rushed his shots, and wound up missing repeatedly. The hand-eye coordination wasn’t there.

Andrade’s left hand is a devastating weapon when he’s able to land it, but unfortunately his accuracy is so poor that he’s only able to connect with that shot cleanly on rare occasions. Apart from this, Andrade looked gassed in the 1st and 2nd rounds after throwing a handful of wild shots, and this allowed Keeler to recover and take the fight to him.

If Andrade can find a way to improve his accuracy with his left hand, he could be the next star in the middleweight division. Given the ability to land his left hand a higher percentage, Andrade would have a lot earlier knockouts on his record.

What U.S fans want to see are fighters that score fast knockouts the way that Mike Tyson and Thomas Hearns were known for. Andrade can be that kind of fighter is he can improve on his accuracy.

We saw the same stamina problems from Andrade in his recent title defense against Maciej Sulecki last June on DAZN. After looking great in the first seven rounds, Andrae looked like a spent force in the last five rounds, and was all over the place.

His legs were rubbery, and he was breathing hard. The outgunned Sulecki was able to finish strong, and make a fight of it in the last part.