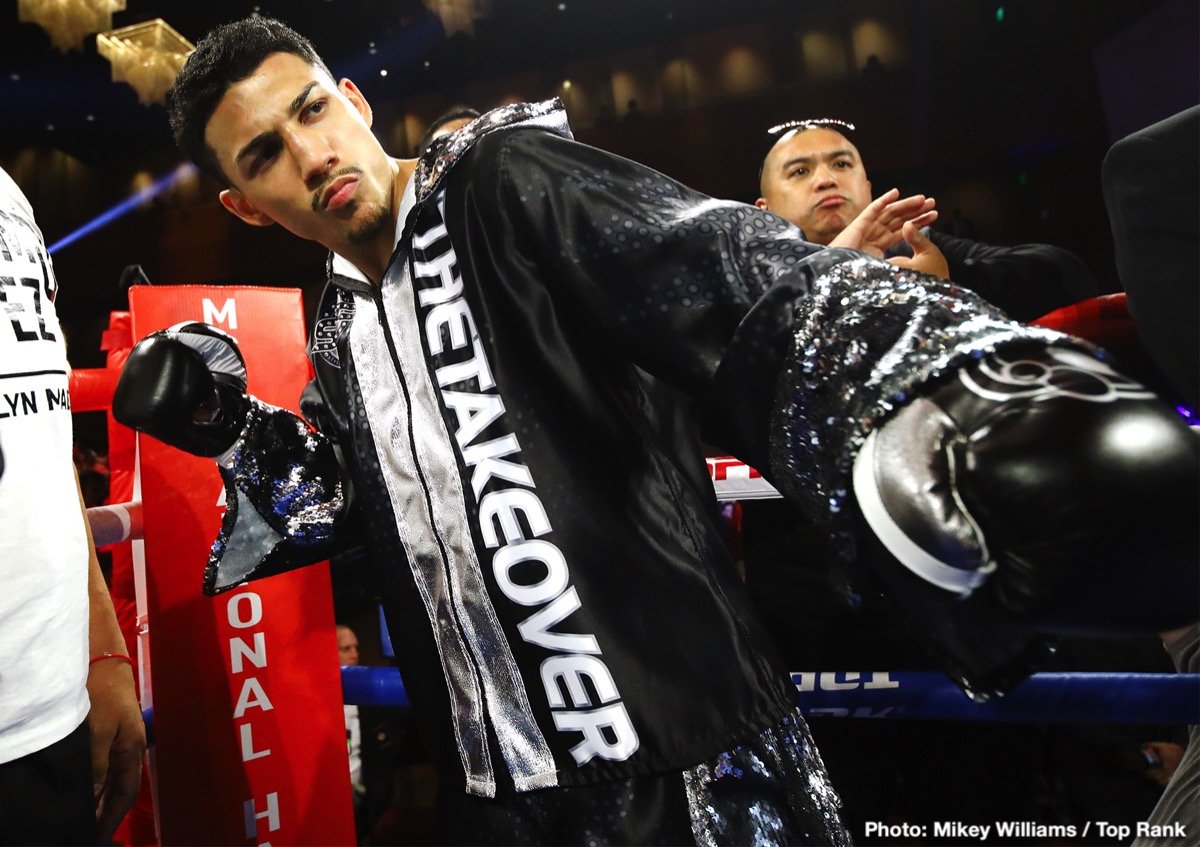 By Chris Williams: Teofimo Lopez is looking SHREDDED after 9 hard weeks of training for his December 14 fight against IBF lightweight champion Richard Commey. #1 WBO ranked Lopez (14-0, 11 KOs) posted a picture of himself on his social media site on Thursday, and he’s looking totally cut up and ready for victory against the 32-year-old Commey (29-2, 26 KOs).

This is a big fight for the 22-year-old Teofimo against IBF champion Commey. If Lopez wins, he’ll be facing WBA/WBC/WBO 135-lb champion Vasiliy Lomachenko in early 2020 in a fight for the undisputed lightweight championship.

Lopez and Commey will be fighting LIVE on ESPN on December 14 in the co-feature bout on the Terence Crawford vs. Egidijus “Mean Machine” Kavaliauskas at Madison Square Garden in New York. The action will kickoff at 9:00 p.m., ET.

Teofimo is coming off of the worst performance of his career in his IBF lightweight eliminator match against Masayoshi Nakatani on July 19. Although Lopez won by a wide 12 round unanimous decision, he fought poorly, and he could have lost. Many boxing fans saw Nakatani winning or doing enough to deserve a draw. The judges gave it to Teofimo by the scores 18-110, 119-109 and 118-110.

9 Weeks of camp! December 14th we will be more than ready. I’ve worked my whole life for this moment 🙏🏽 #AllGloryToGod #TheTakeover #CommeyLopez pic.twitter.com/POmCtLctDq

“Five times fighting at Madison Square Garden, and all of them have been by knockout,” said Lopez to CompuBox TV. “Against Richard Commey, I’m looking to keep the knockout streak going. Me and Commey, we got to duke it out. He’s there to take my bread & butter, and I’m there to take his bread and butter.

“I’m definitely there to take his title, and he’s going to defend it in the best way he can,” said Teofino about Commey. “I know he’s going to bring his A-game that night. I’m no longer fighting tall fighters as of right now. We’ve got Richard Commey, who is 5’9″, and then we’ve got the Loma fight. I think Loma is 5’6″ or 5’7”, so I don’t have no tall guys that I’m facing right now.

The 5’8″ Teofimo won’t need to worry too much about the 5’8″ Commey’s height, since the two of them are the same exact same height. In Lopez’s fight against the 5′ 11½″ Nakatani of Japan, he never looked comfortable. Nakatani used his height and reach advantage to perfection, and gave Teofimo fits. But it wasn’t just the size of Nakataani that caused Lopez problems. It was the toughness, ring smarts and power that bothered him.

Nakatani wasn’t someone that was going to roll over on Teofimo like many of his past opponents had done so.  He came to fight, and he looked like the better man on the night. If Lopez wants to beat Commey, he’ll need to put in a better effort than what he showed against Nakatani, because that won’t be good enough.

Teofimo talks about fans saying he got “exposed” by Nakatani

“We got Joey Gamache as my assistant coach, and my father is my coach,” said Lopez.  “They’re working together, and watching film each and every day. I don’t watch film, but they tell me in the gym what Commey does,” said Lopez. What his pros and cons, and that’s what we’re working on. We work on everything Commey is known for.  Fighters would die for this spot right now, being in the spotlight.

“People don’t know s— about boxing. You’ve got these casual fans, these guys that come with a camera, and want credentials to go to the fights, but they’re just true casual fans. They don’t know much about anything, man. The ‘exposed’ part, you’ve got to understand that these fighters that I’m facing are trying to win. They don’t have nothing, but beating us, they have everything. They come up off of one fight. Saying the exposed word is downplaying everything,” said Teofimo.

Lopez is in denial about his fight against Nakatani. The reason he arguably should have lost that fight wasn’t because Nakatani was excited about facing him. It was because he’s a good fighter, who had the talent to expose Lopez’s limits. We knew it was going to happen or later with Lopez, considering that he’s basically a slugger by nature. Those types of fighters end up getting beaten when they face talented boxers. Lopez got lucky with Nakatani with the scoring for the fight, but he can’t bank on that happening against Commey or Lomachenko.

Lopez: I wouldn’t fight Lomachenko he didn’t have the belts

“That fights [against Lomachenko] is in the works. That’s still the plan. After Commey, I’m the guy with the last belt. I’ve got to beat the champion first. I know Commey is going to bring his A-game, as I said. Then afterwards, we start with a bang and come with a boom in 2020,” said Teofimo.

You’ve got to like Lopez’s willingness to admit that he would duck Lomachenko if he didn’t have 3 world title, since it’s a bad match-up for him. It’s disturbing that Lopez only cares about winning world titles, because that means he’s going to be focusing on going after belts rather than significant fights. With all the paper champions in boxing, it’s less important for a fighter to capture belts. Boxing fans want to see great fights, and many of the belt holders lack talent.

Ivan Baranchyk sparring with Teofimo to prepare him for Commey

“We’ve got Ivan Baranchyk in with sparring, who is a former IBF 140-lb world champion,” said Lopez. “We’re trying to bring different guys. Ivan Baranchyk tried to knock my head off, but that’s just how he is. He’s a beast, but it’s been great work.

“I’m excited, and I’m more focused going into this fight than I was for any other fight. I can feel it, I can see it, and I can know it. That’s the difference and the game changer. I needed to take a step back. Sometimes you need things to fall so you can figure them out, and pick them back up and come back a different way. I’m crazy, but we dream big, man,” said Lopez.

Baranchyk must have been a real handful for Lopez to spar with. After sparring like that, Lopez should be well prepared for his December 14 fight against Commey. Lomachenko is predicting that Lopez will lose to Commey, and he may be right. If Lopez puts in the same performance he did against Nakatani, he’ll get beaten by Commey. He can’t count on the judges saving him again.