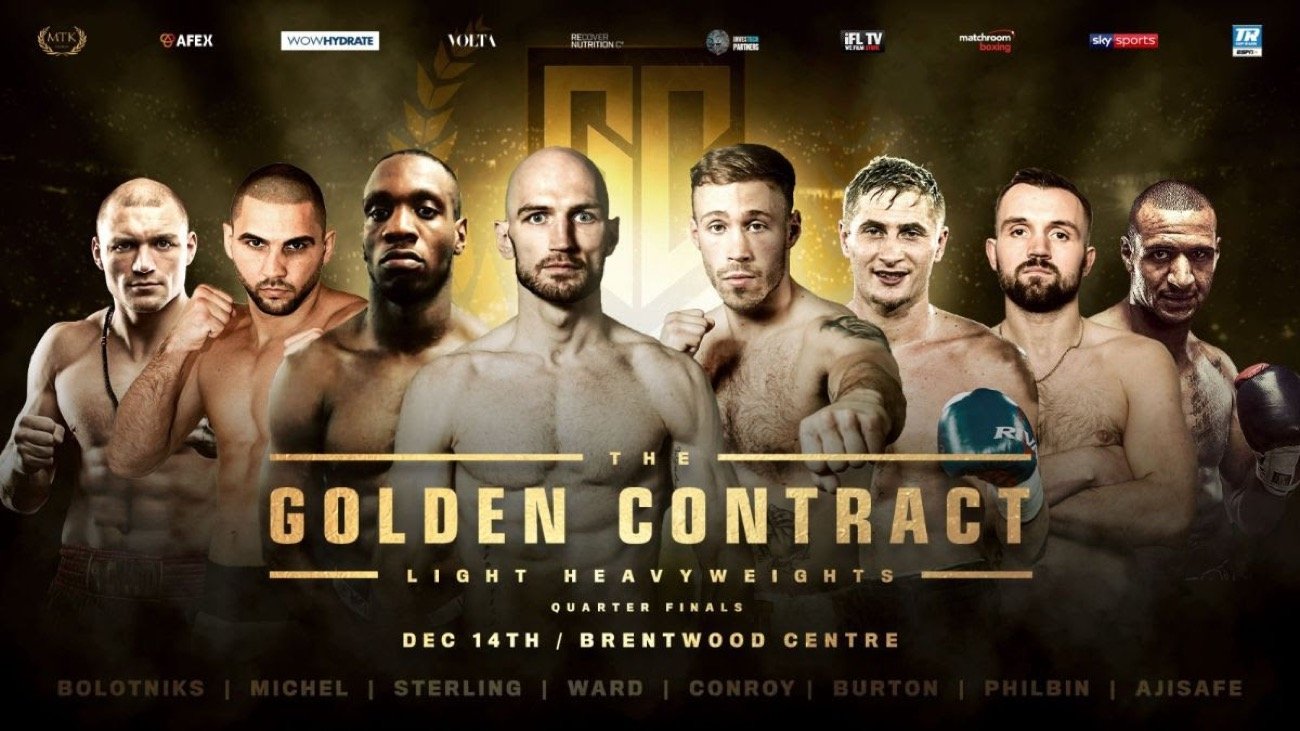 There were some surprise match-ups that have blown things wide open as the #GoldenContract light-heavyweight tournament draw was made today.

The groundbreaking competition returns on Saturday as eight of the best light-heavyweight stars from around the world compete at the Brentwood Centre, live on Sky Sports in association with Matchroom Boxing and on ESPN+ in association with Top Rank.

It meant that the draw has seen Philbin pitted with Michel, Ward going up against Bolotniks, Sterling taking on Conroy and Ajisafe facing off with Burton.

Here’s what they all had to say…

Philbin: “I didn’t expect to get a blue ball! I picked Serge Michel as he has the same experience as myself, so I’m happy.”

Michel: “It feels good to have this fight. He has made a wrong pick, I’ll show that on the night.”

Ward: “He’s highly-ranked and a good fighter. It’s a good challenge for the first fight and I’m looking forward to it.”

Bolotniks: “This is a very good fight and I’m happy. I wanted to fight him the most out of everyone and I’m ready for him.”

Sterling: “It’s a good match up. We have an equal amount of experience so I’m excited.”

Conroy: “I’m just buzzing to have been picked as it took the pressure off me not having to choose anyone. I’m ready for anyone.”

Ajisafe: “It’s unexpected to have this fight, but we’ve just got to crack on and get ready.”

Sky Sports’ Andy Clarke: “The fight between Ajisafe and Burton a really interesting fight. They are the two most experienced fighters in the competition and two former British champions.

“They are all good fights and they’re all well matched, so I don’t really see any fight where you could say there may be a surprise result. Ricards and Sergey may not be as well known to UK fans, but they have both got pedigree, so they’re all 50-50 fights.”

‘The Hammer’ (24-1, 11 KOs) takes his place in the eight-man tournament that kicks off at the Brentwood Centre on December 14 – broadcast live on Sky Sports in the UK in association with Matchroom Boxing and on ESPN+ in the US in association with Top Rank.

As he gears up for his second fight of the year, Burton is ready to unleash the frustration of being avoided by the big names.

Burton said: “Winning this tournament would put my career back to where it should have been three years ago, so this is a must-win tournament.

“This will put me where I need to be. I’ve been ducked and avoided for three years now and this will be big for me.

“It’s exciting now the line-up is complete and I just can’t wait for it all to happen. It’s not an easy tournament because there are a few dangerous names in there, but I’m more than capable of winning it.

“At the end of this tournament, there’s a huge contract. What lies beyond this tournament for me will be big nights and world title fights either here or in America.

“That’s what I want out of this and that’s what’s going to happen.”

Hosea Burton has never been one to duck a fight. In fact, he’s looking for a fight.

Burton has made his intentions known, calling out undefeated Anthony Yarde, man to man, to his face. The two recently encountered one another during Tyson Fury-Deontay Wilder fight week in Los Angeles, California, where Burton was on-hand to support his cousin, Fury.

“Let’s make the fight happen,” Burton told Yarde. “We’re both excited about it. They say I’m not up to you, but let’s get it going man.”

Burton has gone undefeated for two years, since suffering his lone career defeat at the hands of Frank Buglioni, a fight in which he was winning prior to a final round stoppage. Buglioni has recently retired from the sport, leaving Burton to set his sights on Yarde, rather than avenging his defeat first.

Yarde recently scored a knockout victory over Walter Sequeira, October 20 in Brentwood, improving his record to 17-0 with 16 knockouts.

Burton, however, hasn’t been impressed.

“If he’s six foot, I must be six foot nine, because he’s a lot shorter than that,” Burton said of Yarde’s stature. “I would be his first live opponent. Let’s get it on.”

Yarde’s world ranking would play well into Burton’s plans in 2019, which include fighting for a world title after recapturing his domestic gold.

“This would be one of the biggest domestic light heavyweight fights in UK history. Everyone is already placing Yarde amongst the world’s best, but the fact is, he has to get past Hosea,” noted Adam Harris of Athlete Development and Management. “We believe Hosea is the one who’s ready to go after a world title. Let’s have it out and find out who’s right.”

Burton also plans on showcasing his skills in Canada in the new year, following in the footsteps of his cousin Tyson, the lineal heavyweight champion of the world. Both Tyson and his cousin, Hughie Fury, fought in Canada early in their pro careers, and have held training camps in the Great White North as well.

“Some of the best in the world have been coming to Canada to accelerate their careers,” Harris noted, “including Billy Joe Saunders before his most recent fights and, of course, Tyson in the past. We have a special relationship with the country, and the fight scene in Toronto is booming in a way we’ve never seen before. We have no doubt Hosea will be appreciated and find plenty of competition north of the border.”