Hearn: Anthony Joshua has his back against the wall for Andy Ruiz Jr. rematch 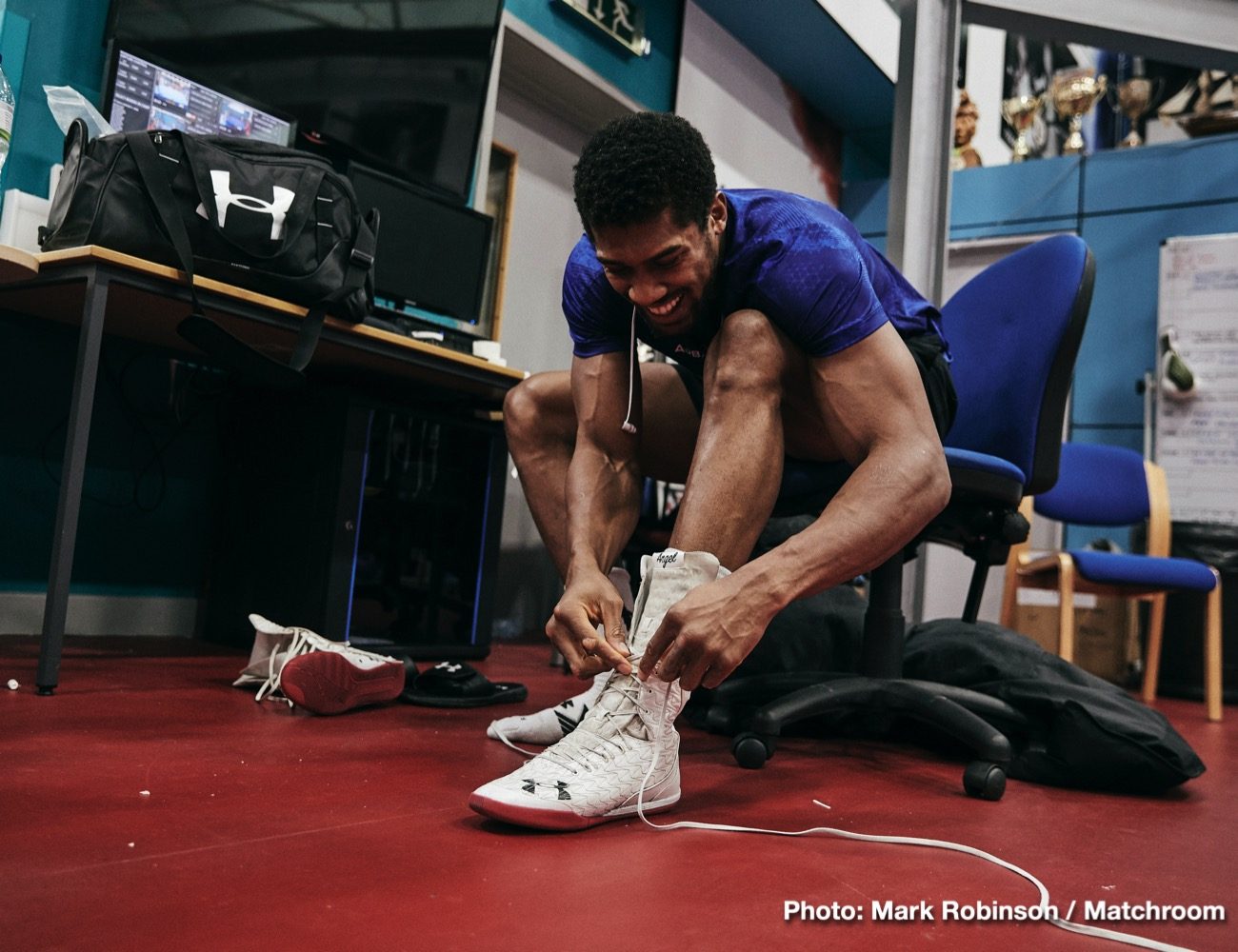 By Allan Fox: Anthony Joshua’s promoter Eddie Hearn says his fighter has his back against the wall for his upcoming fight against his former conqueror Andy Ruiz, and he wants to take back his 3 heavyweight titles..

Hearn says Joshua (22-1, 21 KOs) is more prepared for this fight than he’s ever been, since he’s already been knocked out by Andy last June in his failed takeover of the United States. Eddie is more confident than Joshua right now, and it’ll be interesting to see how he reacts if he loses again.

Joshua came into New York, believing he would take over the country with a win over replacement opponent Ruiz Jr. (33-1, 22 KO), but he found the hard way that the States has a lot of good heavyweights besides Deontay Wilder.

Joshua wants to win back what is rightfully his – Hearn

“He wants this bad. His back is against the wall,” said Hearn to skysports.com in talking about Joshua  “He has prepared better than he’s ever prepared because he’s fighting a guy who beat him, and knocked him down four times at Madison Square Garden in front of the world. He wants to claim back what is rightfully his,” said Hearn.

Joshua lost the fight to Ruiz fair and square. It was his decision to stop fighting on the 7th after he was knocked down twice by Ruiz. The referee Michael Griffin tried to get Joshua to come off the ropes, but he stood staring, and the referee had no choice but to stop it.

Griffin said Joshua was trying to get more time to recover, but he couldn’t let him that within the rules of boxing. Perhaps if the fight had taken place in the UK, the referee would have bent over backwards to give Joshua the seconds that ne needed, but not in the U.S.

Ruiz Jr. thinks Anthony Joshua is starting to feel the pressure now that they’re five days away from their rematch this Saturday. In reacting to Joshua’s comments about wanting fans to bow to him, Ruiz Jr (33-1, 22 KOs). says he’s going to remain humble, and not change who he is.

Ruiz is focused on doing what he needs to do in order to retain his IBF, WBA & WBO heavyweight titles. He wants to knockout Joshua in the same way that he did in their fight on June 1.

“I know it’s going to be a hard task on December 7th, but I got to do all that I can to remain champion,” Ruiz said to IFL TV. “And I think he’s got a lot of pressure on his head. I think that’s really good. We’re going to give the fans an action fight, and that’s more important. Of course, I remain humble, and I remain the same.

“Even though I’m a champion, I still respect the man and any fighter that gets in the ring, because we all risk our lives to feed our children. So I’m still going to remain the same. I don’t think I have the pressure. I think he’s the one that has all the pressure, and I did what I had to do on June 1st,” said Ruiz.

The comment from Joshua about him wanting to make his critics bow before him after he wins, it made him sound like a resentful person. AJ is having a hard time dealing with his loss.

“The main plan is to do it again, to repeat it what I did June 1st on December 7th,” said Ruiz. “You know what? I think I’m going to be weighing the same. Maybe a little lighter or maybe just the same. I’ve been eating good, and I’ve got my chef with me. We’ve been doing the same thing. It could be good or it could be bad,” said Ruiz about Joshua’s weight loss.

“I don’t know if he’s still going to have that power, and that punch. But I’m pretty sure he lost weight so he can boxing me around, using his jab, trying to keep me away, but we’ve been practicing that. We can’t wait until December 7th,” said Ruiz.

Joshua’s decision to lose muscle to improve his speed and his boxing ability won’t work, according to Ruiz. He thinks Joshua is going to try and box him around, but he says he’s going to cut off the ring and get to him. Ruiz has obviously been training for the tricks that Joshua will be using in the fight. Joshua is likely going to hold, move, jab and stall out the fight.

His trainer Rob McCracken let Sky Sports know that they’re going to follow the game plan that they had for the Joseph Parker fight, which means he’s going to jab and move. Ruiz has already trained for that if Joshua chooses to try that game plan.

“I thought it was an excellent knockout,” said Ruiz about Deontay Wilder’s 7th round knockout victory over Luis Ortiz. “I didn’t say what round, but I knew he was going to knock Ortiz, and what do you know, he did. Of course, I want those big fights, but first before I jump to any other fighter, I’ve got to win December 7th against Anthony Joshua. But of course, I’d love those big fights. Good luck. I’m going to be bringing all I’ve got, and I know you’ll be bringing it all too. The best man wins,” said Ruiz.

A big money unification fight awaits Ruiz against WBC heavyweight champion Deontay Wilder if he can beat Joshua. If Ruiz can keep winning, he might be able to swing back for a third fight against Joshua if he’s willing to risk that.

Wilder (42-0-1, 41 KOs) has a rematch against Tyson Fury on February 22 that he needs to get out of the way first. But after that fight, Wilder can face Ruiz in a bout with all the titles on the line.