Berlanga and Vargas Ready for MSG Spotlight on Crawford Undercard 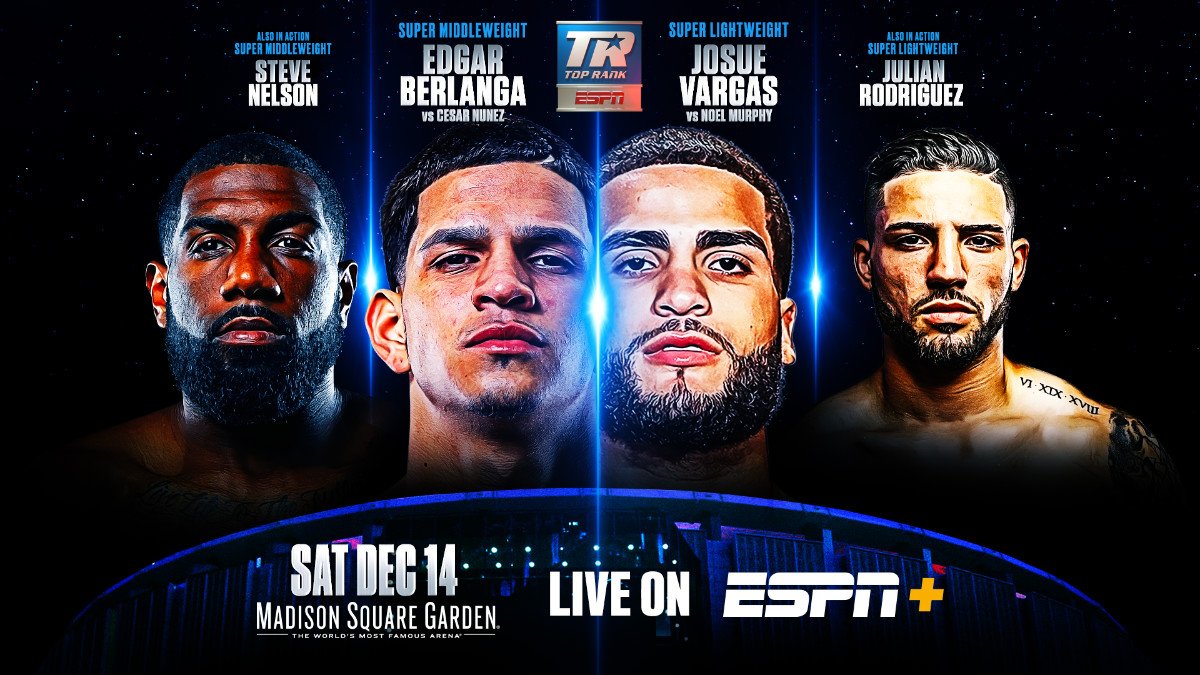 Two of New York City’s flashiest and most promising prospects, Brooklyn’s Edgar “The Chosen One” Berlanga and the Bronx’s Josue “The Prodigy” Vargas, are ready for their hometown close-ups Saturday, Dec. 14 at Madison Square Garden before pound-for-pound king Terence “Bud” Crawford closes the show.

Berlanga, boxing’s newest Puerto Rican knockout artist, has never seen the second round as a pro and has scored seven knockouts in 84 seconds or less. He made his Top Rank debut on the Crawford-Amir Khan card April 20 at Madison Square Garden, knocking out Samir dos Santos Barbosa in 46 seconds. He last fought Aug. 10 in Philadelphia, and his ring entrance with hip-hop icon Fat Joe lasted longer than the 2 minutes, 24 seconds it took him to knock out Gregory Trenel. Spain’s Nunez is the stiffest test of Berlanga’s career, as his only career defeat came via eighth-round stoppage to former WBA super middleweight world champion Vincent Feigenbutz.

“It’s a blessing to fight at MSG, my second time fighting in the big room,” Berlanga said. “I’ve had a few opponents who were supposed to take me rounds and I’ve knocked them out in the first round. I’m ready to go those rounds, so let’s see if he can handle my power.”

Vargas, the flashy southpaw who turned 21 years old in May, is seeking his 10th consecutive win since a 2016 disqualification defeat. The Puerto Rican-born Vargas moved to New York City with his family when he was 5 years old and, in 2011, he was dubbed a “13-year-old prodigy” by the New York Daily News. This will be his fourth fight of 2019 and fifth since making his Top Rank debut on the Vasiliy Lomachenko-Jose Pedraza card at the Hulu Theater at Madison Square Garden last December. Murphy, from Cork, Ireland, now resides in the Woodlawn section of the Bronx. He is unbeaten in three bouts since a close decision defeat to the then-unbeaten Mikkel LesPierre.

“I went to see a lot of fights there, especially when Miguel Cotto fought at the Garden,” Vargas said. “I remember seeing all the Puerto Rican fans. It gives me goosebumps every time I think about it. I always dreamed of fighting at MSG in front of my supporters from New York and Puerto Rico. I finally got here. I just can’t wait to perform under the lights at MSG, the big one.”

In a battle of unbeatens, Crawford stablemate Steve “So Cold” Nelson (15-0, 12 KOs) will take on Cem “Champ” Kilic (14-0, 9 KOs) in a 10-rounder for the vacant NABO super middleweight title. Nelson made his super middleweight debut Sept. 1 in his hometown of Omaha, Neb., knocking out Derrick Findley in four rounds. Kilic has four knockouts in his last five bouts.