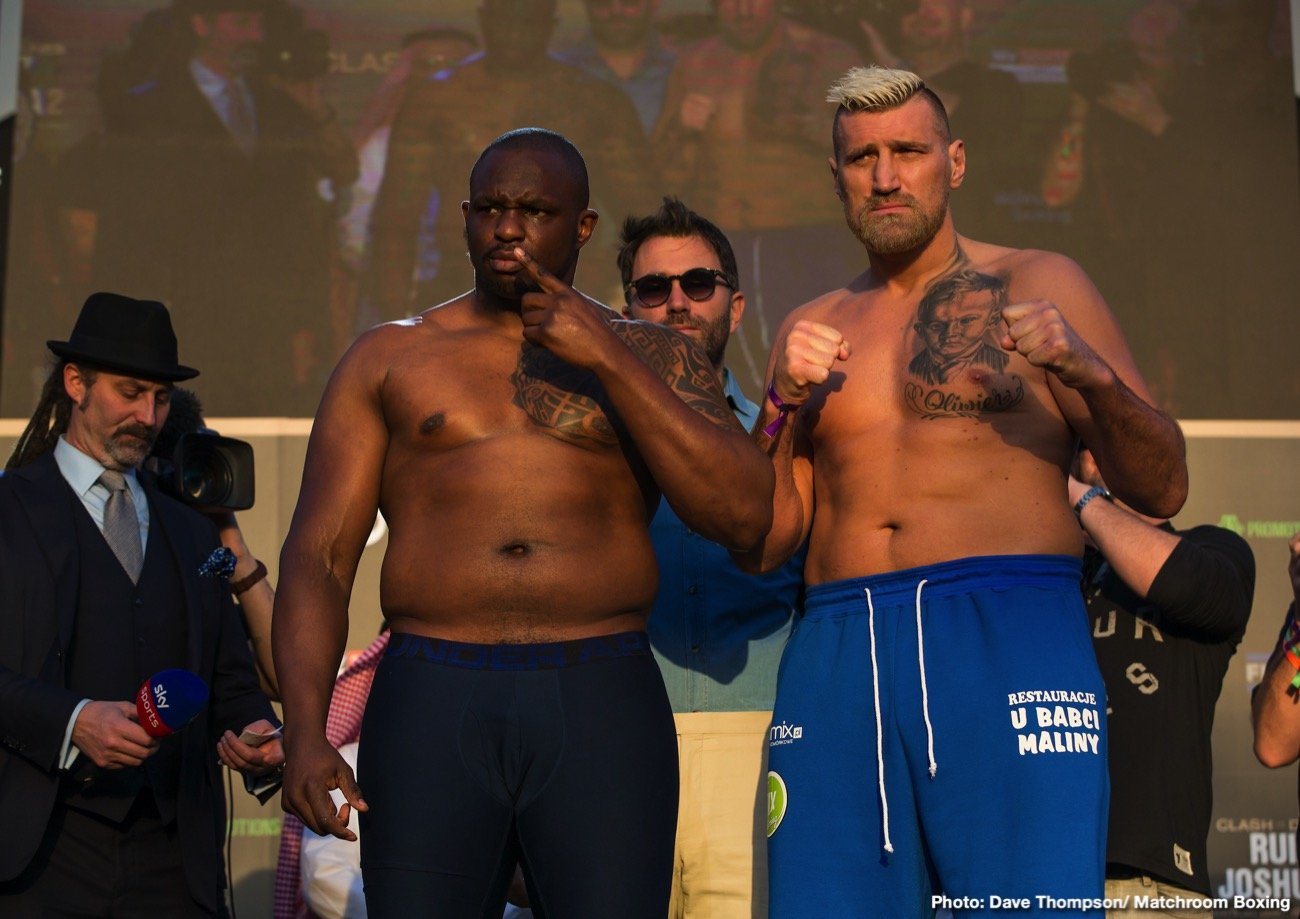 By Scott Gilfoid: Heavyweight Dillian ‘The Body Snatcher’ Whyte weighed in at a career high 271.1 pounds on Friday for his scheduled 12 round bout against former world title challenger Mariusz Wach for their fight this Saturday in Saudi Arabia.

Whyte (26-1, 18 KOs) looked terrible, standing on the stage with his belly hanging over his trousers. He looked like he hadn’t trained at all for the fight. Dillian’s conditioning looked worse than Andy Ruiz Jr, who tipped the scales at an incredible 283 lbs on Friday for his rematch against Anthony Joshua in the main event.

As heavy as Whyte is, it won’t be surprising if he struggles to win against Wach.

Wach may quit after Whyte “tickles his ribs” – Hearn

“Mariusz looks in good shape. I think he’s been training and waiting for an opportunity to come, and I expect Dillian to take the fight to him,” said Hearn to IFL TV. “Wach soaks it up really well, and he’s very durable.

“It’s how much heart Wach has left at this stage in his career. If his pride is still there, this could go really late, and go to points. If it’s not, he starts taking big ones from ‘The Body Snatcher,’ and starts getting his ribs tickled, he may choose to turn it in. So I can see Dillian stopping him later.

“I think the toughest thing about this fight is it’ll look like the Helenius fight. Everyone shouldn’t think about looking good, and just getting a solid victory. I remember when Jarrell Miller boxed him [Wach].

“He’s hard to look good against, because he’s quite slow, he ties you up a bit, and he’s huge. So I think Dillian has got to be aggressive in this fight. Obviously, I’m just a fan, and he’s the one that has to go in there and do the business,” said Hearn.

The 39-year-old Wach has been knocked out 3 times since 2015, and that’s a good sign that Whyte an do the job on him too. Wach was knocked out by Alexander Povetkin, Martin Bakole and Jarrell Miller.

Hearn picked out and easy mark for Whyte to beat in Wach, and if he can’t knock this guy out too, then it would be a disappointment. Whyte has got to be able to knockout guys like Wach for him to be taken seriously by the elite heavyweights.

Whyte wants Hearn to get him world title shot in 2020

“I told him [Hearn] let’s get this work next year, and deliver me the opportunities,” said Whyte to IFL TV. “Give me a world title, because it seems like everyone that turned pro as me and just after me, all of them fought for world titles except for me. Some of them,” said Whyte.

Hearn is powerless to get Whyte the title shot that wants, because he’s currently in limbo with the World Boxing Council until UKAD’s investigation is over. If UKAD speed things up and release the results of Whyte’s B-sample, then perhaps they might order Wilder to face him.

Until then, Whyte isn’t going to be fighting for the WBC title. Hearn can throw Whyte a bone, and tell Joshua defend against him in 2020 IF he beats Ruiz on Saturday to win back his IBF/WBA/WBO titles.

Hearn has doubts WBC will give Whyte a chance

“I do,” said Hearn when asked if he thinks Whyte will fight for a world title in 2020. “My worries are with the WBC, because we aligned ourselves with the governing body. So we should have had it by now, and we should be having it after February. We put so many eggs in that basket, and we could have stayed with the WBO.

“When that title gets vacant, we would have had that title shot by the middle of next year, but he wanted to show loyalty to the WBC. So we put the eggs in one basket, and we’re so deep in that situation that we have to keep fighting for what is correct. What is correct is Dillian Whyte gets a shot at the world heavyweight title [against WBC champion Deontay Wilder],” said Hearn.

“We’ve tried to make Whyte-Wilder, and we’ve tried to make Wilder-Joshua,” said Hearn. “They just don’t want to know. It’s so frustrating. Maybe it’s not even Deontay Wilder. Maybe it’s just the people behind their career that are doing their own thing. Why wouldn’t you fight Dillian Whyte over Luis Ortiz in a rematch? There was no need for that rematch,” said Hearn.

Whyte won’t be getting a word title shot in 2020 unless Joshua beats Ruiz to win back his three belts. The WBC is waiting on UKAD, and they’ve already made it crystal clear that Whyte will need to wait until 2021 for his world title shot against Deontay. Tyson Fury has taken Whyte’s place as the WBC mandatory, and there’s talk of him and Deontay looking for a trilogy match in 2020.

It could be a long wait for Whyte

If Whyte’s B-sample comes up positive for PEDs, there’s no telling how long he’ll need to wait for his title shot. Heck, Whyte might need to start from scratch at the bottom of the WBC’s rankings. Gilfoid wouldn’t be surprised if that’s the case.

It’s never good when a fighter’s drug tests show up with adverse findings. Although UKAD hasn’t suspended Dillian, the WBC has taken away his mandatory status for the time being. If Hearn wants to help Whyte, he needs to put pressure on UKAD to speed up their investigation.

“For three times more money,” said Whyte about his opinion that Wilder would have made 3 times more money fighting him rather than Luis Ortiz in a rematch. “He was offered $100 million to fight Joshua, and he turned it down. Whatever that smoke, it must be some serious stuff,” said Whyte.

Wilder has made it clear what he wants Whyte do to in order to get a title shot against him. He wants Whyte to fight Luis Ortiz, and prove that he can beat him. That was something that Wilder asked Whyte to do over a year ago, and even the WBC tried ordering the Ortiz-Whyte fight. It didn’t work.

Look at it this way. If Whyte had followed Wilder and the WBC’s wishes for him to fight Ortiz, he would have gotten his world title shot AGES ago. Instead, Whyte was stubborn about it, and chose to take soft fights against the following heavyweights:

Joshua and Whyte are addicted to boxing – Hearn

“Dillian will be getting a win this week, and then starting camp beginning in January,” said Hearn. “People say about AJ, ‘Do you think he’ll retire if he loses?’ No, boxing is his life. He’ll fight this year, next year and the year after, and so will Dillian. They love it, and they’re addicted to the sport,” said Hearn.

It’s interesting how Hearn is repeating himself over and over about how he believes Joshua WON’T retire after a second loss to Ruiz, but he’s more hopeful than anything. The thing is, even if Joshua doesn’t retire, he still could wind up hanging up his gloves if he keeps losing.

Things haven’t gotten to the point where Joshua’s career is plummeting yet, but that may happen. Look at it this way. If Ruiz blasts Joshua to smithereens on Saturday night, Hearn will most likely pull him away from fighting solid fighters for the next year. But when hearn does start matching Joshua against good fighters again, he may lose just like he did in his 2 fights with Ruiz.

I think Joshua has such a big ego that he won’t be able to handle it, and he’ll crumble to pieces. He won’t want to continue and end up as a trial horse for the young lions. I’m just saying.

“You can never be sure,” said Whyte when asked about the Joshua vs. Ruiz rematch. “It’s heavyweight boxing. I picked Joshua to win, and I believe he’ll win. People say he needs to change things. He doesn’t need to change a lot. He just needs to change a few smaller adjustments. If you put him and Ruiz in a machine, he wins 92% of the time.

“Obviously, Ruiz was able to pull it off. He’ll be smarter this time, and he’ll realize that he doesn’t need to rush or please the crowd. Just go out and get the win. Worry about getting the win today, and I’ll worry about looking good in the next fight.

“They matched him good in his career, and he got a bunch of knockouts. He got into that mindset. Now he has to realize this is boxing. Sometimes it’s about getting the win, and looking good in your next fight,” said Whyte.

What Whyte says about the Joshua vs. Ruiz 2 rematch has to be taken with a grain of salt, because he’s already admitted that he wants AJ to win out of selfish reasons. Whyte, 31, can make more money fighting Joshua than he can fighting Ruiz. Besides that, Whyte isn’t ranked in the top 15 by the IBF, WBA or WBO, that means he can’t force Ruiz to fight him.

Joshua and Whyte will fight sooner or later

“I think you’ll see that fight. I really do,” said Hearn when asked when Whyte will get a shot at AJ. “Joshua said the other day, ‘I’ll probably fight Ruiz again. I’m going to be around a long time. I want to fight everyone. If there’s a big fight, I want to be in it.’ Joshua against Whyte will always be a massive fight.

The way that Hearn got antsy and nervous when asked when Whyte will get a chance to fight Joshua again, it’s clear that he doesn’t want that fight to happen. Hearn hasn’t put in any kind of effort to make a rematch between Joshua and Whyte since their fight in 2015. Joshua was staggered in that fight in round 2, and he gassed out. He didn’t get his second wind until the 7th.

Hearn appears to be more interested in Whyte fighting Deontay Wilder for his WBC heavyweight title than he does in matching him against Joshua. The reason for that is obvious. If Whyte is busy fighting Wilder, he doesn’t pose a threat to the gravy train that Hearn and Matchroom have been riding since 2013. If Whyte beats Wilder, then Hearn would have two revenue streams rather than just one.

“We fought twice, and we beat the hell out of each other,” said Whyte about Joshua. “We have that level of respect for one another. He’s British. I want to see him do well. He’s my countryman. It’s as simple as that.”

Joshua might not do well against Ruiz Jr. (33-1, 22 KOs) on Saturday, and if that happens, it won’t be good for Whyte. Hearn will need to rebuild Joshua from the ground up after a second loss to Andy Jr., and he won’t be able to afford putting him in with Whyte.  There’s nothing Whyte could do about other than complain, but that won’t get him the Joshua fight.

Hearn wants to keep the Joshua money machine going for as long as possible, and if he gets beaten by Ruiz, it’s going to put him in a dire situation where he has to fight guys afford him guaranteed wins. Whyte doesn’t fall in that category. He’s not someone that Joshua can beat with 100% certainty. The last thing Joshua needs would be a third straight defeat, and knows that.

Other weights on Saturday’s Joshua vs. Ruiz 2 card: 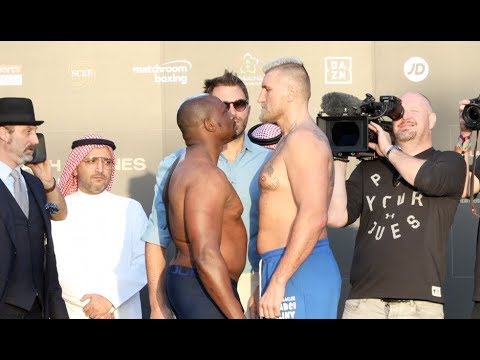