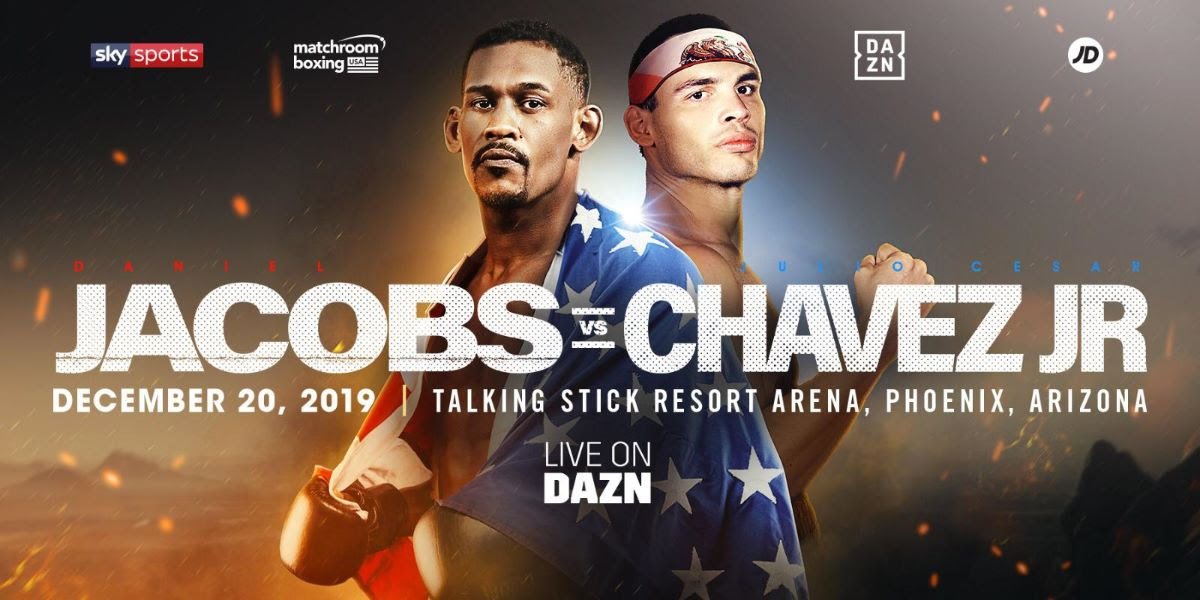 By Dan Ambrose: Former world champion Daniel Jacobs and Julio Cesar Chavez Jr. will be in action in 6 days from now next Friday, December 20 LIVE on DAZN in the United States and Sky Sports in the UK. The fight will be taking place in the 168 lb weight class at the Talking Stick Resort Arena in Phoenix, Arizona

Former IBF/WBA middleweight champion Jacobs (35-3 29 KOs) has decided to move up to 168 following his close 12 round unanimous decision loss to Saul Canelo Alvarez last May in Las Vegas.

Danny Jacobs hoping to reinvent himself at 168

Jacobs, 32, could have won that fight if he’d been more aggressive and less fearful-looking in the first six round. The scores were 116-112, 115-113, 115-113. Jacobs is moving up to super middleweight because he feels it’s a weight class he’ll be able to make easier than 160, and he’ll have more strength. We’ll soon see if anything changes.

For a lot of fighters, they mistakenly believe that the grass will be greener when they move up in weight, but soon find out they’re no better than they were in the previous division. That could be Jacobs’ problem. He doesn’t fight hard enough in the first half of his fights, and that’s been a problem for him for a long time.

Jacobs vs. Chavez Jr. is more of a business type of fight than sports-wise, as it’s a match between two guys on opposite sides of the spectrum. Chavez Jr. isn’t ranked in the top 15 by any of the sanctioning bodies at super middleweight, and his career has never recovered since his one-sided 12 round decision loss to Sergio Martinez in 2012.

For all intents and purposes, Chavez’s 15 minutes of fame ended with his embarassing loss to Martinez seven years ago. Since that fight, it’ s been a race to the bottom for Chavez Jr., who is the son of Mexican boxing legend Julio Cesar Chavez.

Unlike Chavez, Julio Jr. isn’t blessed with talent. Although he found a degree of success at middleweight in 2011 and 2012, he did it with the help of careful matchmaking a size advantage over his opponents. Back then, Chavez Jr. was already huge for the 160-lb weight division, and he would melt down to make. Once he rehydrated, he had a size advantage over many of his opponents.

“I think any promoter that tries to put on a fight involving a fighter that is suspended by a Commission in the United States aught to have his license taken away and not allowed to promote,” said Top Rank Boxing promoter Bob Arum to SerEbro EnlosDeportes. “If we don’t respect the laws, and don’t respect the Muhammad Ali act, then we have nothing.

“I don’t care where the guy [Hearn] comes from,” said Arum. “His excuse is he’s out of the country, but he should know what the rules are here. If Nevada has suspended a fighter, you don’t try and got to a Commission in the United States of anywhere else and try and get that fighter licensed to fight. You just don’t do that, otherwise it destroys the sport.

“The Nevada Commission acted appropriately as far as Chavez is concerned, because under the rules of the Commission, when a fight is announced, the Commission has jurisdiction to test a fighter, because you may not know, a lot of fighters take performance enhancing drugs, and then clear their system before the press conference. So if you wait for the press conference, you’re going to miss the fact that they’ve taken performance enhancing durgs” said Arum about Chavez Jr.

Top Rank Boxing promoter Bob Arum isn’t happy that Chavez Jr. failed to agree to be tested recently by VADA when he was in Las Vegas, Nevada. As a result, Chavez Jr. was suspended by the Nevada State Athletic Commission. Nevertheless, Chavez Jr will still be fighting on December 20th due to his promoter Eddie Hearn of Matchroom choosing to take the Jacobs-Chavez Jr. fight to Arizona, where it was approved.

“They sent a Nevada person to Chavez’s camp, the Wildcard camp,” said Arum “The guy [tester] waited all day, and Chavez REFUSED to be tested. Once he did that, that was grounds for suspension, and that’s what the Nevada Commission did. So what Eddie Hearn is trying to do by going around the Nevada Commission and having the Arizona Commission, which would be a violation of federal law, license the fight, is abhorrent. And anybody that cares for the future of boxing should step up and let their voices be heard.

“I have no idea if he was on something or not, but if you’re sent by a valid authority, and you’re tested, and you refuse to take the test, then that’s the equivalent of testing dirty,” Arum continued about Chavez Jr. “Now whether he was dirty or not, how would I know?

“If the promoter persists in doing the fight in another jurisdiction, I think the Nevada Commission will suspend the license of a promoter, #1, and #2, will not in the immediate future, license that promoter in Nevada.  “He failed to take a drug test that he was required to take, and therefore he has to be suspended,” said Arum in discussing his views on Chavez Jr.

If Hearn is unable to stage events in the U.S, it’s unclear whether that will hurt him significantly, as he’ll find a way to still put on his cards. He can take them to nearby Canada or Mexico. There’s also the UK, which is where Hearn lives, and it’s where he mainly operates out of.

“Look at the French kid, Tony Yoka, who was the big Olympic champion,” said Arum. “He missed three drug tests. I know he’s clean. I know the kid, he’s totally clean. He missed them, because he had other things to do. The French Commission suspended him for a year, and while he could have gone elsewhere and fought, he was a man, and said, ‘I’m not going to fight until my suspension is over with the French Commission.’

“When he did the fight, Chavez was a licensed fighter,” said Arum. “He didn’t know that Chavez would refuse to take the test or not. He [Hearn] doesn’t know the laws in the United States. He’s totally disregarded, and he’s a guy that has operated under the board of the British Board of Boxing Control, which is not an agency. It’s a group, it’s an organization setup by the promoters. Therefore, it has different rules and standards from the Commissions in the United States, which are government entities,” said Arum.