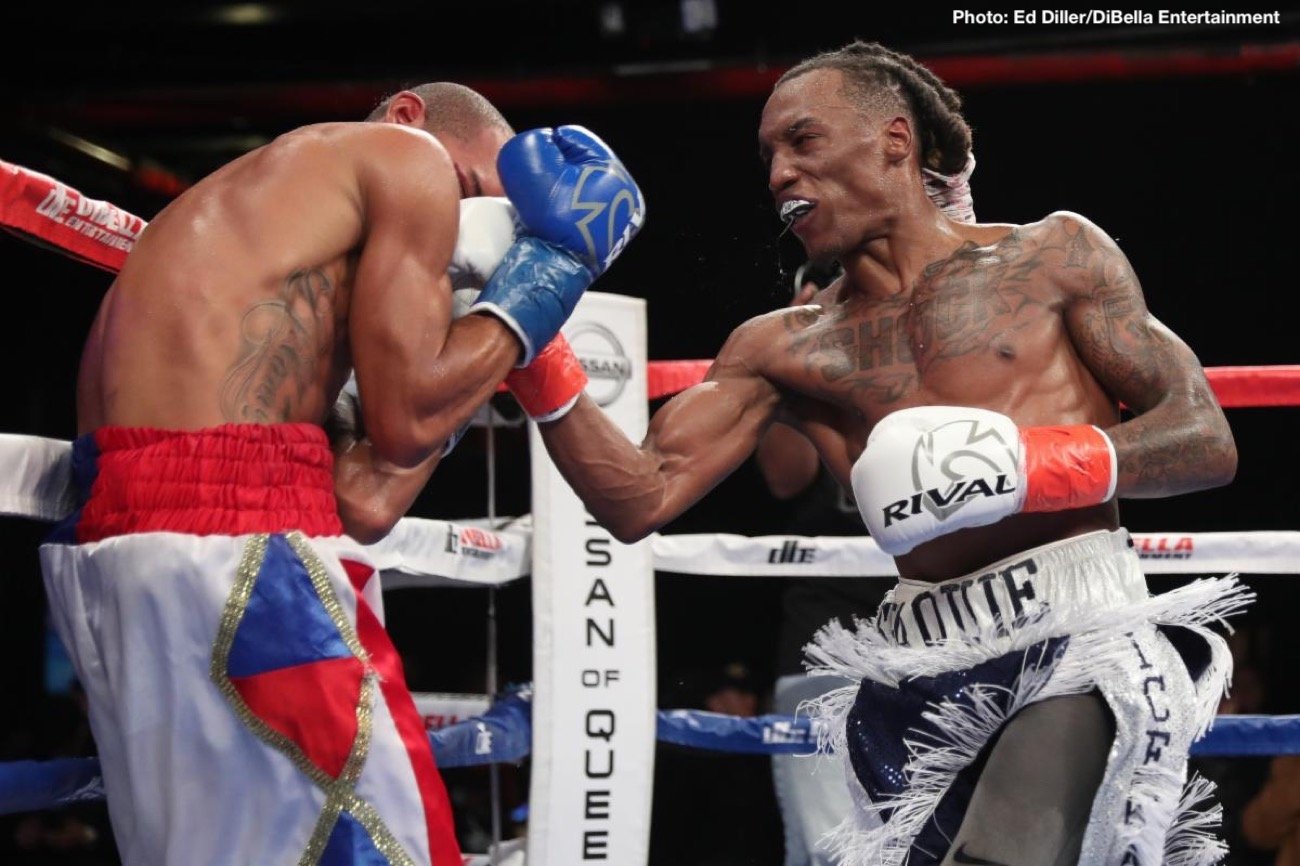 On Thursday night, DiBella Entertainment (DBE) debuted its long-running Broadway Boxing series at Terminal 5, in the Hell’s Kitchen section of Manhattan, NY, presented by Nissan of Queens, Azad Watches, OPTYX, Christos Steak House, and Gagliardi Insurance. The 112th edition of the series was streamed live on UFC FIGHT PASS®, the world’s leading digital subscription service for combat sports. The night was also a celebration for DiBella Entertainment as it was announced on Wednesday that DBE President Lou DiBella will be inducted into the International Boxing Hall of Fame as part of the Class of 2020.

In the main event, world ranked super featherweight contender O’Shaquie “Ice Water” Foster defended his WBC Silver title for the first time, cruising to a 10-round unanimous decision against Puerto Rican Alberto Mercado. Foster, 129.9 lbs., of Houston, TX, spent much of the contest using feints to catch Mercado, 129.4 lbs., of Humacao, Puerto Rico, with quick counters upstairs. A patient Foster picked his shots well and showed good timing to land with maximum impact and efficiency. When backed against the ropes in round six, Foster found the space to land short right hooks to the body to weaken his adversary. Clearly hurt, Mercado’s legs were rubbery in the seventh and Foster wisely continued to dig downstairs. Outboxing Mercado in the closing rounds, Foster seized the victory with tallies of 99-91 twice, and 98-92. Ranked #8 by the WBC, Foster, now 17-2 (10 KOs), is working his way toward a world title shot. Mercado dropped to 16-4-1 (3 KOs).

In a thrilling women’s world title fight, “Merciless” Mary McGee, 138.2 lbs., of Gary, IN, captured the vacant IBF women’s junior welterweight crown with a dominant 10th-round stoppage victory against Argentinean Ana Laura Esteche, 138.8 lbs., of Buenos Aires. McGee controlled the action, but the tough-as-nails Esteche, a former unified WBA/IBF/WBO super lightweight world champion, pressed forward throughout, willing to take shots to work her way inside. McGee, who had twice challenged for world titles going in, set the tone in round two, rocking Esteche with an overhand right then landing three left hooks flush. McGee’s left hook proved to be a key weapon for the entire bout, while Esteche’s sturdy chin and tenacity forced her foe to have a high work rate. In round five, a jab-straight right combination wobbled Esteche, who then stumbled to the canvas for what should have been called a knockdown but was ruled a slip. Esteche would fire back counter shots whenever she was backed up, but McGee’s power overruled her offensive offerings. The two combatants traded shots in an extended rally during the seventh to the delight of the cheering crowd. A jab-straight right felled Esteche in the eighth. Landing very sharp punches, McGee was determined to end the contest inside the distance and dished out a furious barrage of shots to start the 10th round. Feeling Esteche had taken enough punishment, the referee halted the bout. McGee became the first to knock out the Argentinean just 30 seconds into the final frame. With the victory, McGee’s record now stands at 26-3 (14 KOs), while Esteche returns home at 14-6-3 (2 KOs).

The 6-foot-4, 27-year-old heavyweight prospect Stephan “Big Shot” Shaw, 246.8 lbs., of St. Louis, MO, lived up to his nickname, dropping Gregory “Bad News” Corbin, 274.4 lbs., of Dallas, TX, near the end of round one with a powerful jab-straight right combination to the temple. Following a barrage of shots to open the second, Shaw pumped a stiff jab to set up his power shots. In the third, a straight right downstairs followed by a left hook to the head stunned Corbin and another cracking right hand to the temple had him stumbling into the ropes, prompting the referee to stop the contest at the 2:14 mark of the stanza. Shaw upped his record to 13-0 (10 KOs), while Corbin’s resume dipped to 15-3 (9 KOs). As an amateur, Shaw won the USA Nationals and National PAL tournament in 2013.

Born in Vieques, Puerto Rico, now living in Berlin, NJ, 21-year-old lightweight southpaw prospect Victor “El Turu” Padilla, 136 lbs., outfought a very game Fredric Bowen, 134.8 lbs., of Jackson, TN, over five frames. Padilla began by applying pressure and trading shots with Bowen. Two right hooks to the temple wobbled Bowen near the end of the first. For the majority of the remaining rounds, it was Bowen pressing forward, though to his own detriment, as he ate a lot of leather. Padilla spent this time focusing on his counter attack. In the fourth, Padilla’s hooks to the body appeared to sap Bowen’s energy. Padilla continued to target the midsection in round five then, with under a minute left, he pawed his jab and followed up with a monstrous left hook that sent Bowen to the canvas and his mouthpiece flying. Bowen rose to his feet, but was met with a follow-up barrage until the referee jumped into save him from further punishment. The stoppage came at the 2:47 mark of round five. Padilla is now 7-0 (6 KOs), while Bowen, 6-4-1 (3 KOs), was stopped for the first time in over a decade. Padilla turned professional in December 2016 after a stellar amateur career that included three National championships and a record of 90-7.

Fighting for the first time since challenging then-WBO junior welterweight world champion Maurice Hooker in March, Brooklyn, NY’s Mikkel “Slikk Mikk” LesPierre, 141.6 lbs., rebounded with an eight-round unanimous decision victory against Roody Pierre “Rude Boy” Paul, 141.2 lbs., from Terrebonne, Quebec, Canada. Standing toe-to-toe for much of the contest, LesPierre used his shoulder roll defense to evade fellow southpaw Paul’s offense and land well-placed counter shots. Paul did sporadically land a few punches cleanly, but LesPierre’s accurate uppercuts and consistent body attack wore him down. Scorecards read 80-72, and 79-73 twice, all for LesPierre, now 22-1-1 (10 KOs). Paul left the ring at 16-6-2 (6 KOs). Born in Trinidad and Tobago, LesPierre moved to the US at age six and was raised in the East Flatbush neighborhood of Brooklyn, NY. When he’s not training, LesPierre works full-time as a data specialist at Mt. Sinai Hospital, where he’s been employed for the past 10 years in various positions.