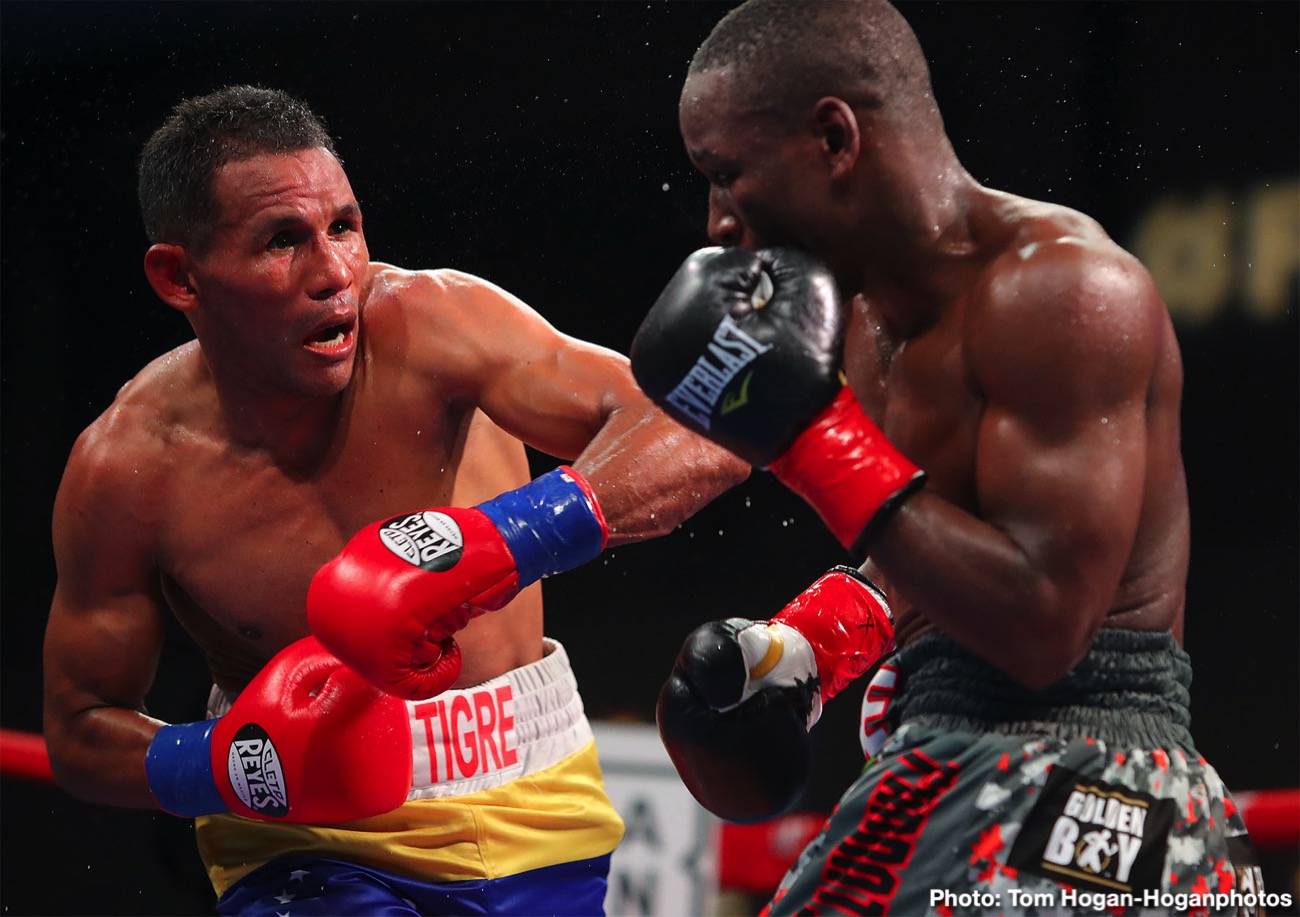 Venezuelan puncher Ismael Barroso (22-3-2, 20 KOs) scored an upset 12-round unanimous decision against Canadian contender Yves Ulysse Jr. (18-2, 9 KOs) to capture the WBA Gold Super Lightweight Title in the main event of Thursday Night Fights on Dec. 5 at the Hangar at the OC Fair & Event Center in Costa Mesa, Calif. Barroso won with scores of 111-117, 113-115 and 113-115. The fights were streamed live on DAZN and on Facebook Watch via the Golden Boy Fight Night Page beginning at 10:00 p.m. ET/7:00 p.m. PT. The series is also available on regional sports networks around the nation.

“I want to thank God for this win,” said Ismael Barroso.”I didn’t just win on my strength; I won by the will of God. My trainer told me to push hard and so I won the championship rounds. I want to thank my whole team and everyone who stood by me.”

D’Mitrius “Big Meech” Ballard (20-0-1, 13 KOs) of Temple Hills, Maryland and Yamaguichi Falcao (16-1-1, 7 KOs) of San Paulo, Brazil fought to a 10-round majority draw in a bout that was for the then and still vacant NABF Middleweight Title. One judge scored the bout 97-93 for Ballard, which was overruled by two scores of 95-95.

“I thought I came stronger in the later rounds,” said D’Mitrius Ballard. “I felt I won this fight. I controlled the pace, walked him down and finish strong. But this is boxing. What can you do?”

“I felt I did better,” said Yamaguchi Falcao. “I respect the judges’ decision. He is a very good fighter. I trained for several months, and this was not the result I expected. But now I want to train even harder for the next fight.”

Mihai Nistor (1-0, 1 KO) of Bucharest, Romania made his professional debut with a third-round knockout win against Christian Mariscal (13-5, 6 KOs) of Tijuana, Mexico in a scheduled six-rounder in the heavyweight division. The fight was stopped at 2:00 of the aforementioned round.

“It was my first time as a professional with all these people and on TV,” said Mihai Nistor. “I had to warm up for a bit, but then I was able to finish the fight.”

George Rincon (9-0, 6 KOs) of Dallas, Texas defeated Antonio Flores (8-2, 2 KOs) of Northglenn, Colorado via knockout in a scheduled four-round super lightweight fight. Rincon ended the clash at :34 of the fifth round.

“I’m always looking for the knockout,” said George Rincon.”He was a tough fighter with a good chin, so I had to make some adjustments. Then, I found the right shot that ended the fight.”

Jason Quigley (17-1, 13 KOs) of Donegal, Ireland bounced back from his first and only loss with a dominant stoppage victory against Abraham Cordero (13-5-2, 7 KOs) of Guadalajara, Mexico in a scheduled eight-round super middleweight clash. Quigley ended matters at 1:36 minutes of the third round.

Irish prospect Aaron “Silencer” McKenna (10-0, 6 KOs) scored a knockout win against Victor Gaytan (6-5, 3 KOs) of Guanajuato, Mexico in a super welterweight fight originally scheduled for six rounds. The fight was stopped at 1:58 of the second round.

“I got him with the perfect body shot,” said Aaron McKenna. “You can see the progress I’m making with Robert Garcia. We were working on that in camp, and now you see the result.”

Rianna Rios (1-0) of Colorado Springs, Colorado made a successful professional debut by defeating Elizabeth Tuani (0-1) of SeaTac, Washington via unanimous decision in a four-round bantamweight bout. Rios won with three scores of 40-36

“This is a dream come true,” said Rianna Rios.”I’m so grateful, especially since this is on a Golden Boy card and have my team with me. This has been a blessing.”

Ulysse Jr. vs. Barroso was a 12-round fight for the WBA Gold Super Lightweight Title presented by Golden Boy in association with Eye of the Tiger Management. The event was sponsored by Tecate “THE OFFICIAL BEER OF BOXING.” The fight took place on Thursday, Dec. 5 at the Hangar at the OC Fair & Event Center in Costa Mesa, Calif. The event was streamed live on DAZN and on Facebook Watch via the Golden Boy Fight Night Page. The series is also be available on regional sports networks around the nation.