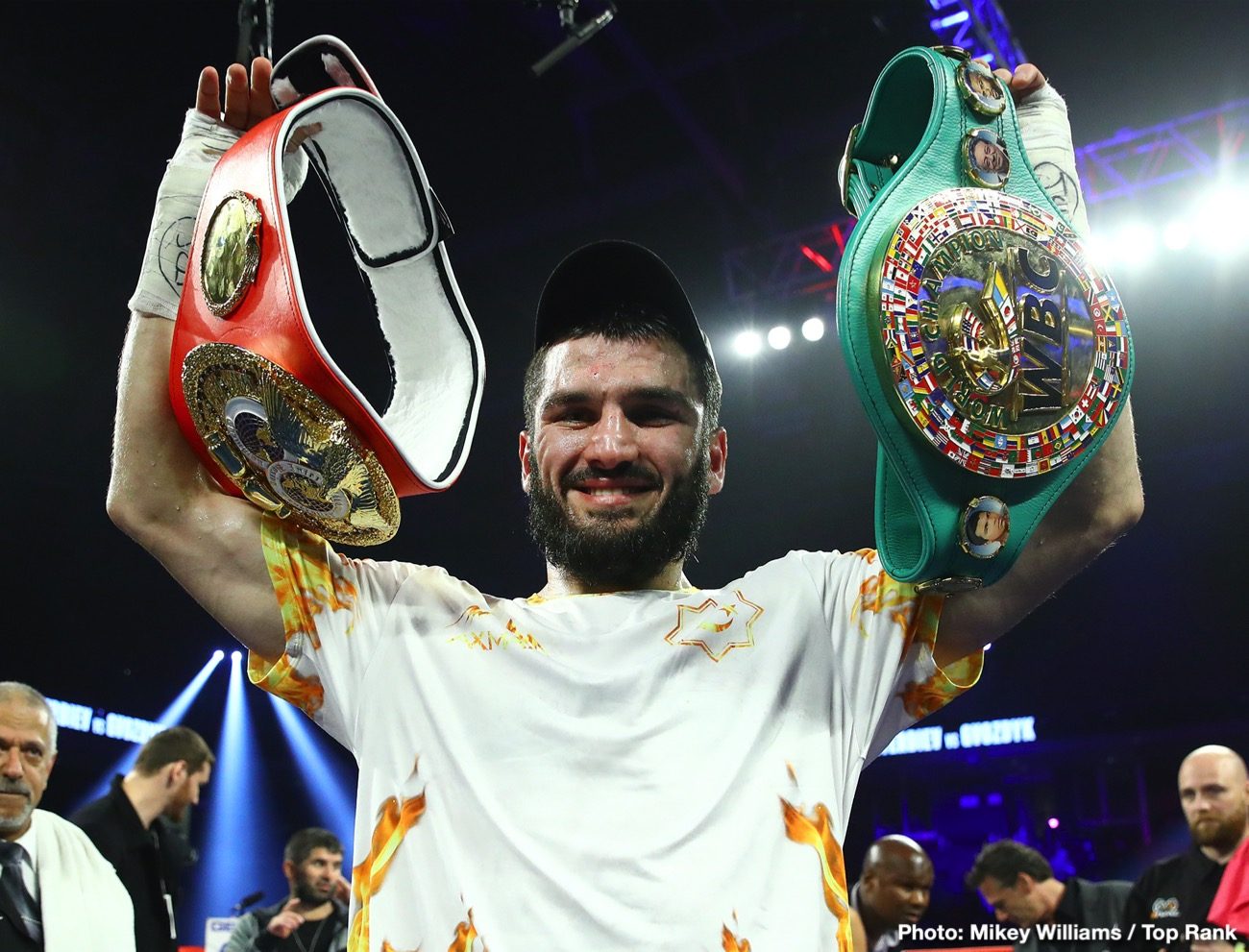 By Dean Berman: Artur Beterbiev will be defending his IBF light heavyweight title against his unbeaten mandatory Fanlong Meng next on a still to be determined date. According to the WBC, the promoters wanted Beterbiev’s World Boxing Council on the line, but that’s not going to happen. Meng is ranked #15 by the WBC, and that’s too low for his WBC belt to be at stake.

The December 28 fight between WBC Silver light heavyweight champion Jean Pascal and Badou Jack will be a WBC 175-lb title eliminator. The winner of the fight will be Beterbiev’s WBC mandatory. The World Boxing Council could order Beterbiev to defend against the new mandatory straightaway.  That would upset Arum’s plans of having Beterbiev face Bivol in a unification match.

Beterbiev vs. Meng not a great fight

This is a fight that won’t do much for Beterbiev’s popularity in the United States or worldwide, but there’s no getting around the match. It was hoped that Canelo Alvarez would face Beterbiev in a unification fight following his win over Sergey Kovalev last month, but the Mexican star has said nothing about staying at 175.

The two-time Russian Olympian Beterbiev interesting fights ahead of him in the division, but he’s being slowed up with having to defend against Meng, who has faced largely no one to get the #1 mandatory position. Meng fought in the 2012 Olympics for China, but he’s beaten no one special since turning professional.  Beterbiev will be a huge favorite in this fight against the 31-year-old Meng.

Last month, Top Rank promoter Bob Arum said Beterbiev (15-0, 15 KOs) and Meng (16-0, 10 KOs) will be fighting on an Island outside of China. If Beterbiev wins, then Arum wants to match him against WBA 175lb champion Dmitry Bivol (17-0, 11 KOs) in his next fight. Whether the WBC gets in the way of the Beterbiev vs. Bivol fight remains to be seen. If they do, it’s not that big of a deal, because Jack and Pascal are good fighters. Either one of these guys would be an excellent opponent for Beterbiev.

Beterbiev won the WBC light heavyweight title last month in stopping champion Oleksandr Gvozdyk in the 11th round on October 18. At the time, Arum said Beterbiev will face Meng next to take care of his IBF mandatory obligations, and then face Bivol.

Arum was hoping that if former WBO light heavyweight champion Sergey Kovalev defeated Saul Canelo Alvarez, then Beterbiev could face him. Unfortunately, Kovalev lost the fight, and Canelo is showing NO INTEREST in facing Beterbiev or even Bivol. Canelo is expected to vacate the WBO title, and move back down to 160 and/or 168.

“Beterbiev has an obligation with the IBF,” said Beterbiev’s promoter Bob Arum about his next fight. “We got permission to do this unification [against Gvozdyk], and he has to fight Dino Duva’s fighter Meng, who is a pretty good Chinese guy. We’re hoping to do that fight in China. We have a big offer to go to an Island off China, which they call the Chinese Hawaii…Eddie Hearn said he would make Bivol available to fight the winner of this fight,” said Arum.