Anthony Joshua on Dillian Whyte: ‘Even my enemy supports me’ 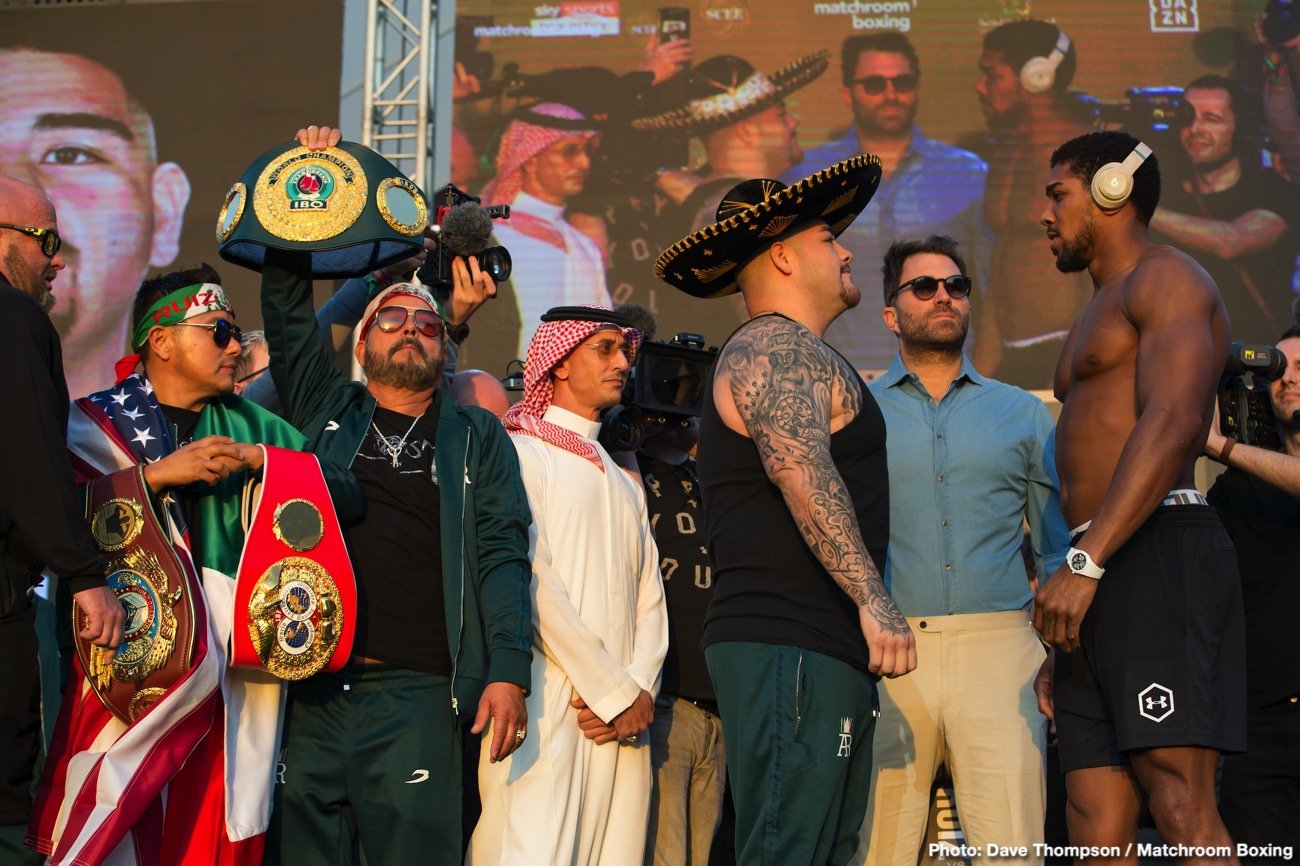 By Scott Gilfoid: Anthony Joshua got all choked up this week after receiving words of encouragement from Dillian Whyte in giving him support for his rematch on Saturday against Andy Ruiz Jr. in Saudi Arabia.

Former IBF, WBA & WBO heavyweight champion Joshua mistakenly attributed Whyte’s pep talk as him wanting him to beat Ruiz (33-1, 22 KOs) due to them being fellow Brits. If this wasn’t real life, maybe that’s how it would go, but that wasn’t Whyte’s motive in giving Joshua one of the ‘win it for the old Gip’ pep talks.

According to Whyte, he wants Joshua to win for “selfish” reasons, because he can make more money fighting him than he can Andy Ruiz Jr. It was pretty obvious to Gilfoid why Whyte wants Joshua to win. I just don’t understand why AJ was slow on figuring that out.

By now Joshua should already know that every heavyweight in the division wants to fight him due to the huge payday they’ll get from the fight. You hate to say it, but Joshua has a bullseye on his back that all the top and lower level heavyweight are targeting in order to get that big retirement payday.

Given how poor Whyte looked in his last fight against Oscar Rivas, it’s understandable why he would want to get the cash out payday against Joshua ASAP, because he can lose at any tme.

Hearn has been working his magic up to now with the match-making he’s been doing with Whyte, but as we saw in his last fight against Rivas, he can lose at any time. He should have lost that fight in Gilfoid’s view, but the referee gave Whyte a break after he was hurt with a body shot in the 12th.

Whyte is no different. It’s not in Whyte’s best interest for Andy Ruiz to win this fight, because he’ll make less money fighting him than he would Joshua. Besides that, Ruiz would likely beat Whyte easily, as long as the referee doesn’t blow calls left and right like we some of his recent fights.

Whyte admits he wants Joshua to win for selfish reasons

Here’s what Whyte said to IFL TV about wanting Joshua to win due to “SELFISH” reasons:

“It doesn’t make for a bigger fight than me and Joshua is, you know? For selfish reasons,” said Whyte in explaining that it won’t work well for him if Ruiz beats Joshua again due to the money not being as good against him.

So there it is. Whyte wants to fight Joshua due to selfish reasons, and AJ thinks it’s he’s backing him out of loyalty for country. There’s big money to be made for Whyte if he gets a rematch with Joshua, and that’s it in a nutshell.

During an interview on Thursday, Joshua looked like he was about to cry when he was reminded about Whyte giving him a mini-motivation speech for his match with Ruiz.

Joshua: Even my enemy supports me

“That’s kind of what he was trying to reciprocate for me as well,” said Joshua to IFL TV. “I know it’s a fighting thing, but as a fellow boxer, I want to see him bring the belts back. That’s what it is, really. If you’re a Brit and you’re not supporting us, I don’t know what you’re doing. Even my enemy supports me.

“People that don’t even know me dont support me, but they do. He’s saying I know we’ve shared the ring, we’ve got spite, we hate each other, but aside from that, I want to see you do well. You’re a fellow Brit, and I respect that. It’s a warrior’s mindset, it’s a fighter’s mindset.

I was speaking about it when I was getting ready for this,” said Joshua about Eddie Hearn repeating his comments about ‘this being the place that I was meant to be.’

Joshua doesn’t understand yet that boxing is global. This isn’t an ‘us against them’ type of thing that you see in the Olympics. It’s a sport, and not one nation against another. More than that, boxing is a job for most fighters.

Whyte wants Joshua win on Saturday because it can potentially help his bottom line. That’s it, period. If he can get a rematch against him. Hearn is likely to match Whyte softly until he gets his long awaited rematch with AJ in a year or two.

Whyte was talking boldly this week about wanting rematches with Joseph Parker and Rivas. If Hearn puts him in with either of those guys, I see him losing if the fights take place in a neutral venue with a quality referee that is on his J-O-B. Whyte also is pushing incredibly hard for a fight against Wilder.

In Whyte’s mind, he can thinks he can win that fight, and then use his victory – and WBC title – to make second fight between him and Joshua into a huge match. That’s Whyte’s entire vision for wanting to fight Wilder BEFORE he faces Joshua, but it’s misguided. I see Whyte getting obliterated by Wilder just like Dominic Breazeale.

As far as a Whyte rematch with AJ goes, I don’t see anything being different in a second between them. Whyte is too limited as a fighter for him to ever beat Joshua, and he won’t last long. If Hearn makes a mistake of putting Whyte in with the talented WBC heavyweight champion Deontay Wilder, he’ll be sorry he did so because he won’t last long against him.

AJ will fight Ruiz in trilogy match in future

“I’m definitely looking forward to perform well, and some inside fighting as well with good hand positioning, and defending and countering, really, and leading my way to victory,” said Joshua to IFL TV. “For now, I’m just in the present thinking. Always a fighter, always warrior, just another belt and another one I’m going to be victorious in.

“When you stay in a division for that long, you begin to recycle fighters and stuff like that. So you end up fighting the younger generation, like you saw on the undercard. I fought the majority of the people on there as well.

“I’ll probably end up fighting Ruiz again, and fighting Dillian another time, [Magomedrasul] Majidov another time, then [Deontay] Wilder and [Tyson] Fury down the line. So we’re all in a big mix,” said Joshua.

It would be an awfully good idea for Joshua NOT to fight a third match against Ruiz anytime soon though, because his popularity will nosedive if he loses three fights in a row to him. Believe me, it’s going to be BAD for Joshua when/if Ruiz does a number on him Saturday. If Joshua gets stubborn about it and insists on an immediate third fight with Ruiz, then it could be the end of his career.

Joshua: I want to fight forever

“That quote resonated with me with ‘Ah, you should retire.,'” said Joshua. “Imagine the gladiators years ago that might have lost one fight, and you’ve got people in the Kingdom saying, ‘Ah, he’s washed up. He should retire.’ Gladiators fight for life. This is what we do. And this isn’t about the entertainment business.

“This isn’t about rankings. I think this is about what I do for a living, and this is what I love to do. And I just want to fight forever, and I love this game,” said Joshua.

Ancient gladiators fought to the death, and if you lose, it was over for you. Joshua has things a little mixed up in comparing himself to an ancient gladiator, because it’s a different situation. Whether Joshua wants to admit it or not, boxing is a sport. You’re not a gladiator in the true sense of the word.