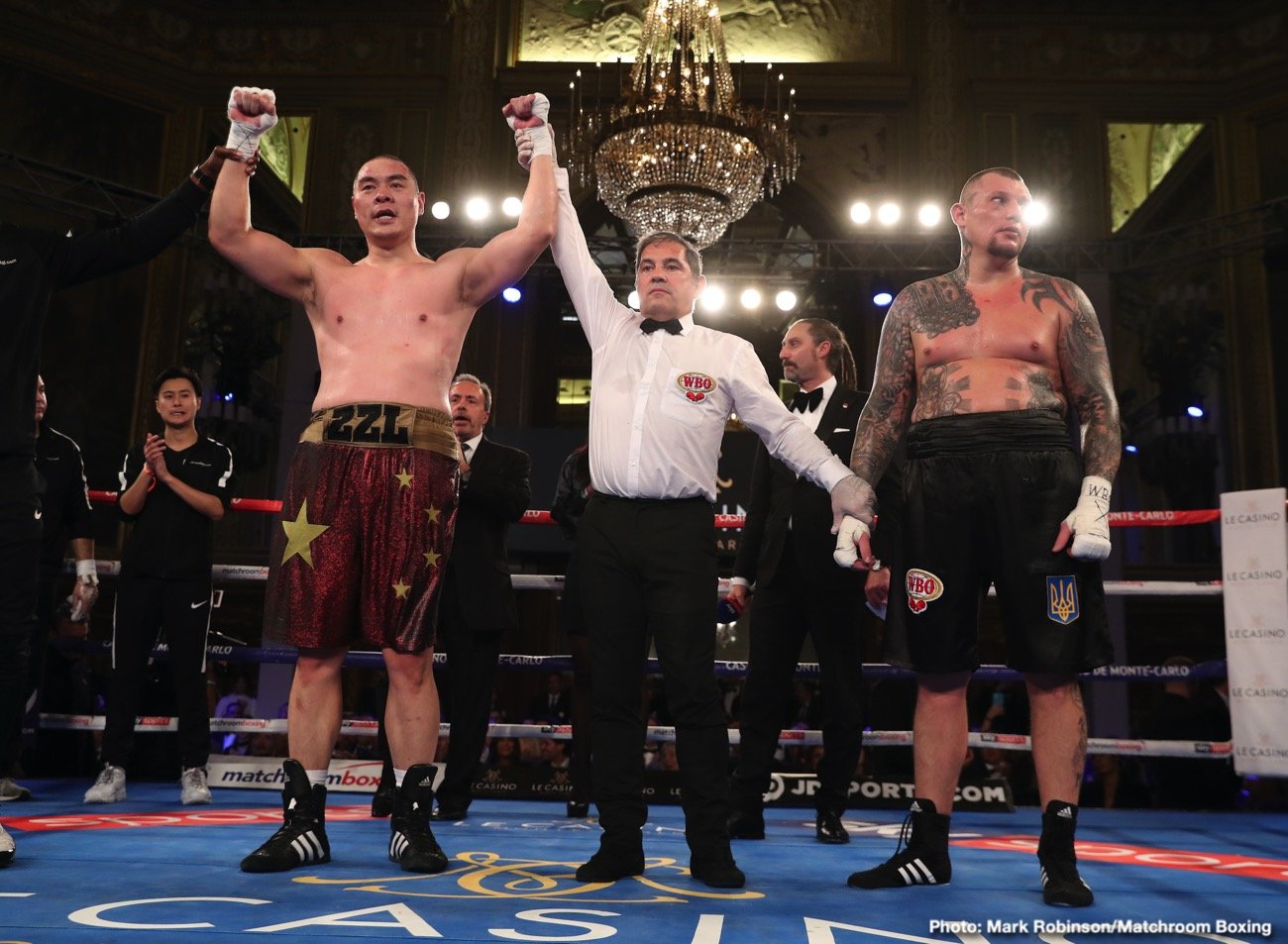 On Saturday, November 30th, Roc Nation Sports’ Chinese heavyweight star Zhang “Big Bang” Zhilei (21-0, 16 KOs) dominated tough veteran contender Andriy Rudenko (32-5, 20 KOs) of Ukraine in a 10 round bout at the Casino de Monte-Carlo in Monaco. Zhilei has now skyrocketed to the top of the heavyweight division, beating Rudenko by way of unanimous decision. The score was 99-91, 98-92, 97-93.

“Being away from the ring for 14 months, I really enjoyed how I felt during the fight,” said Zhilei. “I like such an opponent that could bring the real challenge. He can really take a punch and is hell of a fighter. I dream to face opponents like this, I want to challenge the strongest.”

With this win, “Big Bang” has exploded back onto the heavyweight scene, placing him amongst the biggest names in the division. Zhilei now expects to be ranked among the best Heavyweight contenders and will look to take on more to contenders in order to realize his dream of fighting for the world, heavyweight championship. Zhilei and his team expect 2020 to be a monumental and historic year for the Chinese heavyweight.

“It was wonderful seeing ‘Big Bang’ Zhilei’s return to the ring,” said Roc Nation Sports boxing promoter Dino Duva. “He proved to the world that he deserves to be in the mix for a heavyweight title shot in 2020. Quite frankly, he showed a little ring rust, but he hasn’t fought in 14 months. He has dealt with a lot of obstacles over the past 2 years, mostly due to unfairly being held up on his U.S. visa.

“Not many fighters would have taken an opponent the caliber of Rudenko after being off for so long, but that’s what he wanted, and I commend him for that. He had Rudenko, who has a granite head, hurt a few times, and it would have been great to see him get a knockout, but it was good for him to get the rounds in. Also, Zhilei’s trainer, Shaun George, is doing a great job with him.

“His next fight will be against a world rated contender in early 2020. If he keeps working hard to get into tip-top shape, the sky’s the limit for him and my prediction is he will fight for the Heavyweight Championship in 2020. I sincerely thank Eddie Hearn, Frank Smith and the entire Matchroom Boxing team for this opportunity and look forward to working together with them to continue ‘Big Bang’s’ historic journey.”

“I am very happy to bring a world title back to Brazil,” said Patrick Teixeira. “I want to make boxing bigger in Brazil. Soccer is our biggest sport, and this is a great moment for boxing in my country. It was tough with the cuts, but I was able to get through it because of my experience. It was a little harder, but my corner did an excellent job on the cuts. I felt like I needed to win the last round. It was a close fight. Every point was crucial, and I won the final round to win the fight.”

“We are so proud of Patrick Teixeira for capturing the interim WBO World Title at 154 pounds,” said Oscar De La Hoya, Chairman and CEO of Golden Boy. “It was a brutal and bloody war, but Teixeira really dug deep to earn himself the most important win of his career against a very dangerous fighter. We look forward to starting the new year with yet another champion in our stable.”

Unbeaten super-middleweight Charlie Shane moved up to 8-0 with another points win at the York
Hall on Friday, November 29 on a Hellraiser Promotions show.

Signed to Joe Elfidh’s Boxing Connected promotions, the 28-year-old from Chatham defeated debutant Tom Barrett (0-1), who was cut and bruised under his right eye by Shane, but he wasn’t completely happy with his performance still.

“I won on points, but I felt a bit rusty, to be honest, but I’ve got that out of the way and now its onwards to something else,” he said.

The ring rust was to be expected after his first fight in 13 months, due to minor injuries keeping him
out of the ring. His next fight is scheduled for February 29 at Mote Park in Maidstone and has ambitions to challenge for a Southern Area title very soon after.

“I said I’d be looking for a title after this fight or possibly an eliminator for a title. I want to be a Southern Area or English champion next year, that’s the goal.”

The Kent-based southpaw recently signed a new contract with manager Joe Elfidh to keep him at Boxing Connected – formerly JE Promotions – for another three years. He explained his reasons for putting pen to paper with Elfidh again, “Because I trust Joe a lot and I’ve known him for a long time now, before I turned pro.”

Elfidh confirmed that he is looking to guide his super-middleweight talent towards an Area title next, “We’re going for the Southern Area title after this fight. He’s ready to be let off the leash now, still
only 28 and raring to go.”

The Southern Area super-middleweight title has just been vacated by Frank Warren’s prospect Zak Chelli (7-1), who freed the belt to fight for the English crown in his next fight against Jamal LeDoux
(8-1).

Nicknamed ‘The Animal’, Shane said, “I’m definitely looking at the winner of that fight. With our fights being on the same weekend, whoever wins will have the same time to prepare as me, so I’ll be staying ready.”

The emerging 168-pounder is trained by Ray Askew and Sam Latham at the thriving Invicta Gym in
Sheerness.

Shane debuted in March 2016 at Medway Park in Gillingham and claimed the British Challenge belt in his fifth fight at Mote Park in Maidstone against experienced veteran Lewis van Poetsch (6-52-1).

As an amateur, Shane won 25 from 30 fights, representing Medway clubs Brompton ABC, Golden Gloves, and St Mary’s, and reached the semi-finals of the prestigious Haringey Box Cup. He originally trained under the guidance of former champion Johnny Armour when he first turned professional.

Canelo Alvarez: Is there anyone that can beat him?785 Total Shares

Teddy Atlas: Canelo vs. Golovkin 3 ‘is TOO late’636 Total Shares