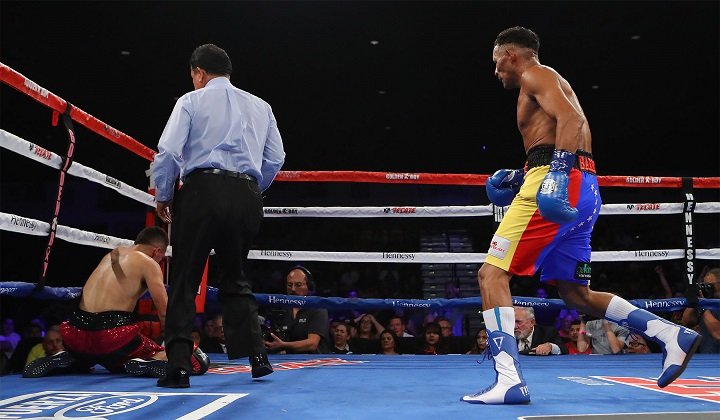 Canadian 140-pound contender Yves Ulysse Jr. (18-1, 9 KOs) will return to the ring against tough Venezuelan puncher Ismael Barroso (21-3-2, 20 KOs) to fight defend his WBA Gold Super Lightweight Title in the 12-round main event of Thursday Night Fights on Dec. 5 at the Hangar at the OC Fair & Event Center in Costa Mesa, Calif. The fights will be streamed live DAZN, RingTV.com and on Facebook Watch via the Golden Boy Fight Night Page beginning at 10:00 p.m. ET/7:00 p.m. PT. The series will also be available on regional sports networks around the nation.

Ulysse Jr. is a 31-year-old contender of Montreal, Canada who has scored four spectacular victories since his controversial split decision loss against Steve Claggett in October 2017. Aside from avenging his loss to Claggett in their last fight, Ulysse Jr. has also defeated previously unbeaten fighters Zachary “Zungry” Ochoa, Esrnesto España and Cletus “Hebrew Hammer” Seldin. Ulysse Jr. will look to inch close to a world title at 140 pounds by defending his prestigious WBA Gold Title for the first time.

“I having the best training camp of my career,” said Yves Ulysse Jr. “My sparring partners have pushed me, and I feel in the best shape I’ve ever been. I’m convinced that I will offer a great performance and intend to dominate my opponent with my speed and precision.”

“I am thrilled to have Ulysse defend his WBA Gold title and getting us closer to our ultimate gold which is world titles and unification,” said Camille Estephan, President of Eye of the Tiger Management. “We want to dominate the division at 140.”

Barroso, a heavy-handed 36-year-old southpaw out of El Tigre, Venezuela, is a former interim lightweight champion who has scored knockouts in 20 of his 21 victories, including a fifth-round technical knockout over longtime contender Kevin “The Hammer” Mitchell and a dominant stoppage win against Fidel “Atrisco Kid” Maldonado Jr. Barroso is looking to take advantage of the biggest opportunity of his career against a dangerous fighter in Ulysse Jr.

“If people think that I’m coming here as a stepping stone, then they’re totally wrong because I’m coming prepared mentally and physically to knock out Yves Ulysse Jr,” said Ismael Barroso. “I have demonstrated in the past that when people try to bring me as an opponent, I have come out victorious. This fight will not be the exception.”

In the co-main event, D’Mitrius Ballard (20-0, 13 KOs) of Temple Hills, Maryland and Yamaguchi Falcao (16-1, 7 KOs) will square off in a 10-round fight for the vacant NABF Middleweight. This will be a battle between two contenders who developed under the Golden Boy banner, but only one will move forward to a world title shot.

Jason Quigley (16-1, 12 KOs) of Dallas, Texas will return to the ring against Abraham Cordero (13-4-2, 7 KOs) of Guadalajara, Mexico in an eight-round middleweight fight.

Rianna Rios of Colorado Springs, Colorado will make her professional debut in a four-round featherweight fight.

Opponents for Nistor and Rios will be announced shortly.

Ulysse Jr. vs. Barroso is a 12-round fight for the WBA Gold Super Lightweight Title presented by Golden Boy in association with Eye of the Tiger Management. The event is sponsored by Tecate “THE OFFICIAL BEER OF BOXING.” The fight will take place Thursday, Dec. 5 at the Hangar at the OC Fair & Event Center in Costa Mesa, Calif. The event will be streamed live on DAZN, RingTV.com and on Facebook Watch via the Golden Boy Fight Night Page beginning at 10:00 p.m. ET/7:00 p.m. PT. The series will also be available on regional sports networks around the nation.

#MTKFightNight LIVE on ESPN+ this Saturday from York Hall »