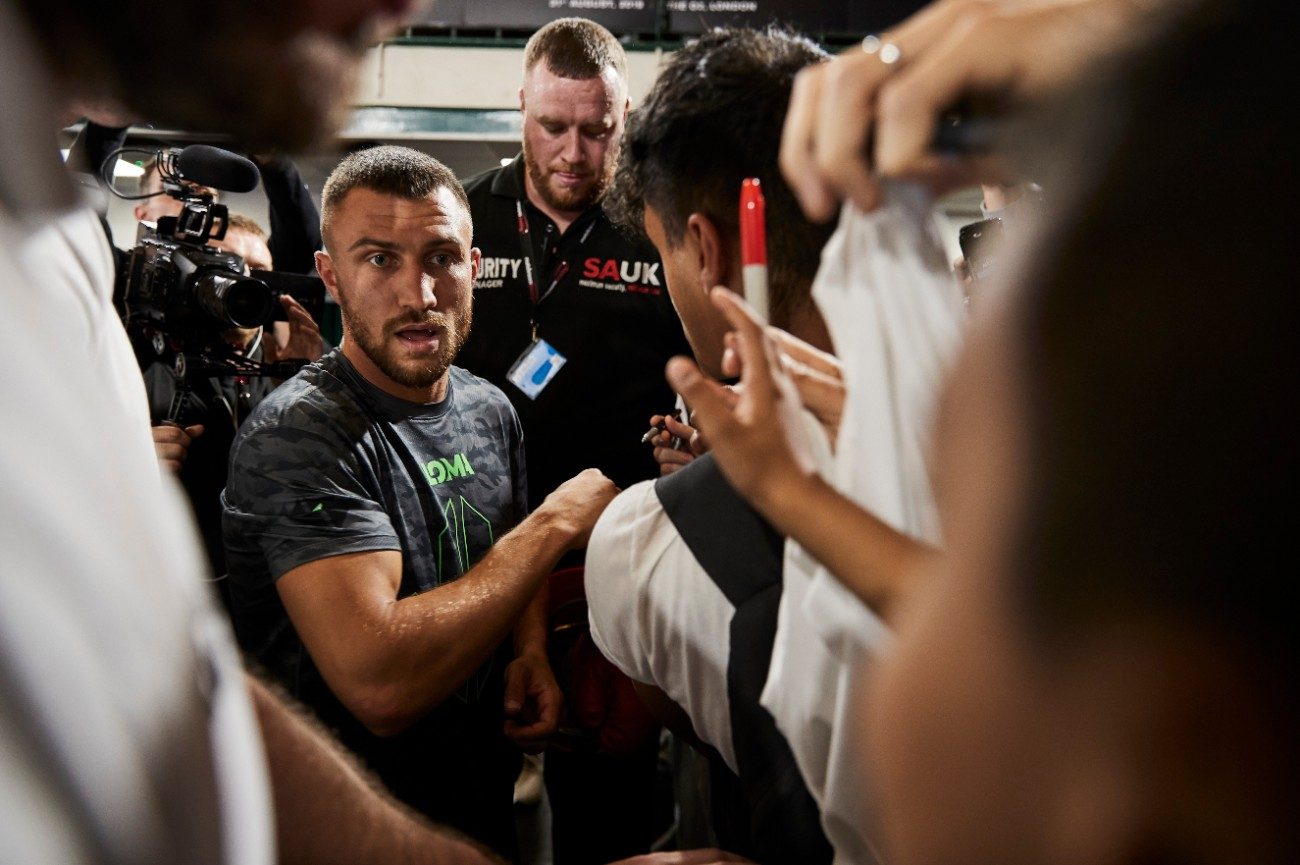 By Chris Williams: A month after being named the Franchise champion at 135, Vasiliy Lomachenko has come out to deny that he asked the World Boxing Council to give him this tag. Lomachenko says he and no one else filed to have the Franchise tag given to him.

Loma states that he was surprised that WBC president Mauricio Sulaiman mentioned in an interview that they filed a request to be given the Franchise tag.

Unfortunately for Lomachenko (14-1, 10 KOs), boxing fans believe that he actively asked for the Franchise tag from the World Boxing Council so that he wouldn’t have to face young lion Devin Haney, who was his mandatory.

The Mayweather-esque Haney (24-0, 15 KOs) would be a really would be a tough fight for the 31-year-old Lomachenko. But now that the WBC has given Loma their Franchise tag, it frees him up from having to take a risky fight against Haney that he could lose.

“I’ve read an interview with [WBC president Mauricio] Sulaiman, and he said we filed a request to be awarded that Franchise champion title,” said Lomachenko to Lomachenko Official TV.

“I would like to make it clear that I did not file anything, and no one asked for it. I did not ask to be awarded with this title, and we did not write any letters. When I read that interview, I was very surprised.

As I thought, the president Mauricio Sulaiman and the whole convention made that decision independently. They decided that I deserved it, and said they would like to grant it to me.

“Thank you, of course. Thank you for the recognition. That was how I perceived it when I read the interview. But when it turned out that the article said it very differently, that I had asked for it, which is false,” said Lomachenko.

You have to wonder whether the Top Rank brass is keeping Lomachenko updated on their moves with the WBC, because it’s widely believed that they’re in favor of him being Franchise champ. After all, as the Franchise champ, Lomachenko is like a King on a chessboard. He’s capable of going in any direction, and doesn’t have to risk his hide against the young lions like Haney.

Haney got the WBC belt only because I vacated it – Lomachenko

“Let’s put it this way, shall we?” said Lomachenko when told that WBC lightweight champion Devin Haney views himself as the WBC champion. “Who is Haney and who has he defeated? How has he gained the title? How? As we boxed for the title with the champions or for the title with the official contender. He got the belt simply because I vacated it, and it was granted to him.

“So, shouting about achievements, and you are so strong that you are avoided. It’s not a question, as I said. I am ready to fight with anyone at any time, and anywhere, it doesn’t matter. The question is business.

“It’s a professional sport where not even sportsmen, but promoters make money. So all the questions must go to them. I am ready, and it’s not a problem. I can accept a challenge, and go wherever they organize it at any time,” said Lomachenko.

Lomachenko can always fight Haney if he wants. Haney and his promoter Eddie Hearn have been calling Lomachenko out 24/7, trying to get a fight against him. This would be a good time for Lomachenko to agree to the fight. He’ll get a lot more notoriety facing Haney than he will the Richard Commey vs. Teofimo Lopez winner.

“I don’t even know, because now everyone tends to move up from 130 to 135, so for the next year, I have enough choices at 135, and then everyone else will get there,” said Lomachenko about fighting Gervonta Davis at 130. “But as I say, if they come up with an interesting match at 130 with an interesting top boxer, it’s not an issue. I will move down there no problem,” said Lomachenko.

“No, I haven’t changed my opinion,” said Lomachenko when asked if he’s changed his mind about his view that Richard Commey will knockout Teofimo Lopez in December. “I still think that way, but, of course, I would like Lopez to win,” said Lomachenko.

A fight between Lomachenko and Gervonta Davis is another match-up that’s a lot better fight than him taking on the Commey-Lopez winner. That’s a fight that a lot of boxing fans would like to see, and it would be a big enough one to be put on pay-per-view. It doesn’t look like it’s going to happen any time soon though.