Havnaa vs Gudino, Thanderz vs Ramos on Nov 16 in Oslo, Norway 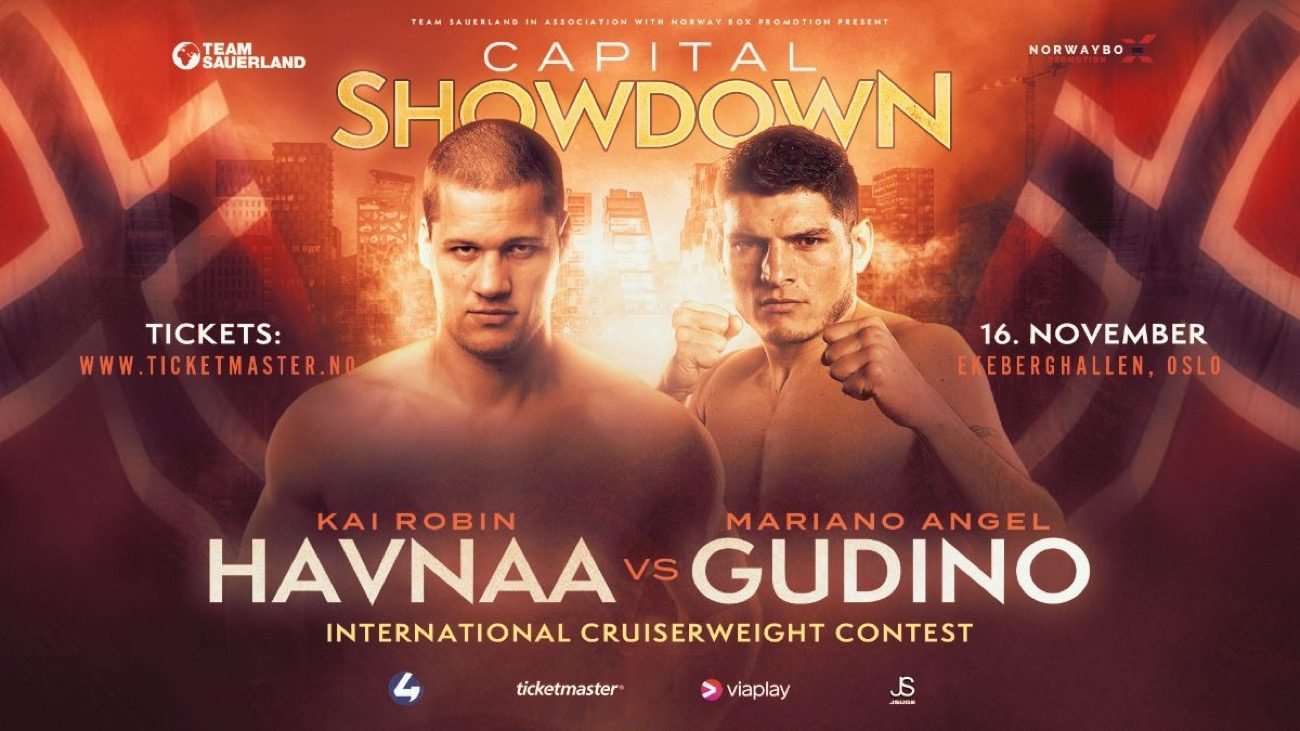 Kai Robin Havnaa (15-0, 13 KOs) has a new opponent set for his cruiserweight clash on Saturday night with Mariano Angel Gudino (13-3, 8 KOs) replacing Al Sands, who has withdrawn from their scheduled contest.

“It’s not ideal to get a new opponent this close to a fight,” says Havnaa. “Especially at this level. All my sparring and preparation has been for Sands, but now I have to forget about him and adapt for a different style. Gudino is as good as Sands. He is a tough Argentinian who I know will come to fight.”

Despite the late call up, Gudino, the former WBC Silver Latino Champion, who has also challenged for WBA and IBO Continental titles, insists he is ready for action and is confident of claiming a notable victory over the Norwegian star.

“Don’t be fooled by the late notice,” says Gudino. “I am always in training. I live, eat and breathe boxing – every minute of the day! I have seen a few videos of Havnaa. I respect every man who steps into the ring, but he’s never fought a boxer with my guts. All of his opponents were from Europe; they were not as hungry and as tough as I am. I am from Argentina. I am descended from generations of warriors. I will smash Havnaa until he cries!

Said promoter Nisse Sauerland: “It’s a big risk to take this fight at short notice. In my opinion Gudino is a tougher test than Sands. He has the South American style and temperament that is sure to make for an exciting contest. Kai will need to be at his best to win this fight and continue his World title charge.”

RAMOS: “THANDERZ WILL FEEL THE POWER OF MY FISTS”

Danila Ramos (8-1, 1 KO) is fired up ahead of her hotly anticipated interim WBC Female World Super Featherweight title clash with Katharina Thanderz (12-0, 2 KOs) on Saturday, November 16th at the Ekeberghallen in Oslo.

The Brazilian boxer has hit back at claims from Thanderz’s coach predicting a knockout win, and has warned her opponent to be ‘ready for war’ as she promises to bring home the belt by inflicting the Norwegian’s first defeat.

The former model and mother, who moved to Argentina to pursue her boxing career, also reveals the motivation behind her World title aspirations.

“Her coach is wrong if he thinks she can knock me out,” she says “Does he even know boxing? I’ve had 150 amateur fights against all different types of opponents. I think she needs to change trainer or after the fight he can watch me train then he will see my power and speed. He doesn’t intimidate me.

“She has never fought a real champion like me. I have all the technical skills to win, and I will win. She will find out what it is like to be in a real battle. After this fight, she will have a record of 12-1. There’s no other way for her.

“Thanderz will feel the power of my fists. She wants to take the bread out of my daughter’s mouth and I will not allow it. She should be ready for war. I will come back to Argentina with the belt. I will become World Champion!”

Tickets are available online via www.ticketmaster.no. All the action will be available to watch live across Viasat 4, Viasport + and Viaplay in Norway.

The experienced Argentinian coach believes he has spotted ‘failures’ in Thanderz, and expects the Norwegian fighter to be ‘surprised’ when she meets Ramos as part of a huge night of boxing at the iconic Ekeberghallen venue.

“We’ve had a very intense camp with a lot of commitment,” reveals Martinez. “We are working very hard for this fight. We have one goal and that’s to win the World title. We know that Katharina is a very strong offensive boxer, but we see failures in her too. Our tactical plan will not be revealed until November 16th, but Katharina will be surprised by Danila’s power and skill.

Having missed out on the same WBC strap against French fighter Elhem Mekhaled earlier this year, Ramos gets a second attempt at World glory, and Martinez is convinced that this time ‘A Guerreira’ takes home the belt.

“We’ve had a really great amount of time to prepare for this fight and to plan all the psychological, technical and tactical components. We didn’t have that last time, but Danila still delivered a very high quality performance, and she has become mentally stronger since that fight. She’s a different fighter now and this is her chance to do it. She belongs at the top with the best in the division.”

THANDERZ WARNS RAMOS: “IT’S NOT GOING TO BE EASY!”

Katharina Thanderz (12-0, 2 KOs) has warned Danila Ramos (8-1, 1 KO) not to expect an easy night when they contest the interim WBC Female World Super Featherweight crown on November 16th at the Ekeberghallen in Oslo.

The former European and WBC International Champion is predicting an ‘intense’ fight, but believes she is ready to claim World honours as she looks to establish herself among the top names in the female 130 lbs division.

“I hope Danila Ramos comes really well prepared because it’s not going to be easy,” said Thanderz. “She is going to meet someone who hits hard and wants to win so she shouldn’t be coming to Oslo for a holiday!

“For me this is a really big opportunity. Winning will be like a dream come true. I’ve been thinking about this opportunity for so many years, and I feel that now is the right time for me to claim my first World title.

“I know Ramos is a tough opponent. I have been watching her quite a lot lately. She has a completely different style to me. She likes to box at a longer distance using her straight punches, and I’m the complete opposite so it’s going to be interesting to see how the fight plays out.

“I think it’s going to be a very intense fight. I plan to start hard from the beginning so I think it will be very entertaining for the people watching.”

Thanderz has been preparing for her title tilt in Alicante under the guidance of coach Jesus Antonio Labrador, and the 31-year-old reveals she is in top shape, and says it could be possible for her to end the fight inside the distance.

“We’ve been training very hard, twice every day, and I feel like I have a lot of energy and motivation, so I’m looking forward to November 16th,” she says.

“I’ve had some really good sparring, which will help bring out the best in me. My conditioning is really good, so I know I’ll be ready to make ten tough rounds, but I also believe I could get a knockout. It’s always more complicated in female boxing because of the shorter rounds, but I know I punch hard, so if the opportunity comes, I will take it. I’m ready to deliver a real battle in Oslo.”

Katharina Thanderz (12-0, 2 KOs) came face-to-face with her opponent Danila Ramos (8-1, 1 KO) for the first time at a press conference today in Oslo ahead of their interim WBC World Super Featherweight title fight on Saturday night.

Thanderz, a former European and WBC International Champion, headlines a stacked card at the Ekeberghallen as she challenges for her first World title, while Norway’s number one male boxer Kai Robin Havnaa (15-0, 3 KOs) takes on Mariano Angel Gudino (13-3, 8 KOs) in a crunch cruiserweight clash.

“I feel great. I can’t wait until Saturday,” said Thanderz. “I’ve had a great camp with really hard training. Some days I was completely exhausted but that’s what you have to do to win a fight like this. I have lots of friends and family coming on Saturday so I’m really happy about that. I’m not sure what’s going to happen but I know that I’m going to give it all. This is a big chance for me to realize my dream and win my first World title.”

“I’m very happy to be here,” said Ramos. “Norway is beautiful and it’s the first time I’ve ever seen snow. I feel like I’m already the champ. I didn’t take my belt home to Brazil last time, but there is no way that’s happening again. I’m certain I will win. Come to the fight or watch on TV, I will put in a sensational performance and you will see a new champion on Saturday!”

“It’s a tough fight for both girls and both fighters are here to win,” said promoter Nisse Sauerland. “It’s a massive night for Norway. Boxing is growing sport over here. It’s been illegal for many years and there have been lots of restrictions, so I’m just happy to put on this great fight night. If Katharina wins then I think there will be a new Norwegian national hero and there will be some very big fights to be made, people like: Terri Harper, Eva Wahlstrom and other big names.”

“I’m happy to be here in Norway,” said Gudino, who comes in as a late replacement for Al Sands. “Havnaa is in trouble. He will see what it is like to fight a real warrior. I’ve come here to fight and I’ve come here to win. I’ve not come here for a holiday. I give the same importance to every fight I have. It doesn’t matter where it is or who it is against. I know Havnaa is a good fighter. He is a big opponent for me, but I’m ready for a war!”

“I can’t wait to get into the ring on Saturday night,” said Havnaa. “I’ve had a late change of opponent before so I’m used to this and I’m not going to let it affect me. My opponent looks fit and strong. I know he is coming here to fight and I will be prepared to face my best opponent yet. He’s says that he’s going to make it war so I’m expecting a war. Let’s go to war!”

“Kai’s had a late replacement. I gave him a list of three fighters and he’s picked the hardest one,” says Sauerland. “I really like his attitude and fingers crossed it doesn’t backfire. I expect a very good, tough fight. It’s going to be a great crowd and we are building something special here in Norway.

“The name Havnaa is synonymous with boxing in Norway. It’s a huge name here. His dad was a World Champion and now Kai is following in his footsteps and emulating his success. He’s the biggest star in boxing in Norway at the moment. He’s taking over and now he needs to produce the goods in the ring.”

Tickets for ‘Capital Showdown’ on November 16th at the Ekeberghallen in Oslo are on sale now and available online via www.ticketmaster.no.