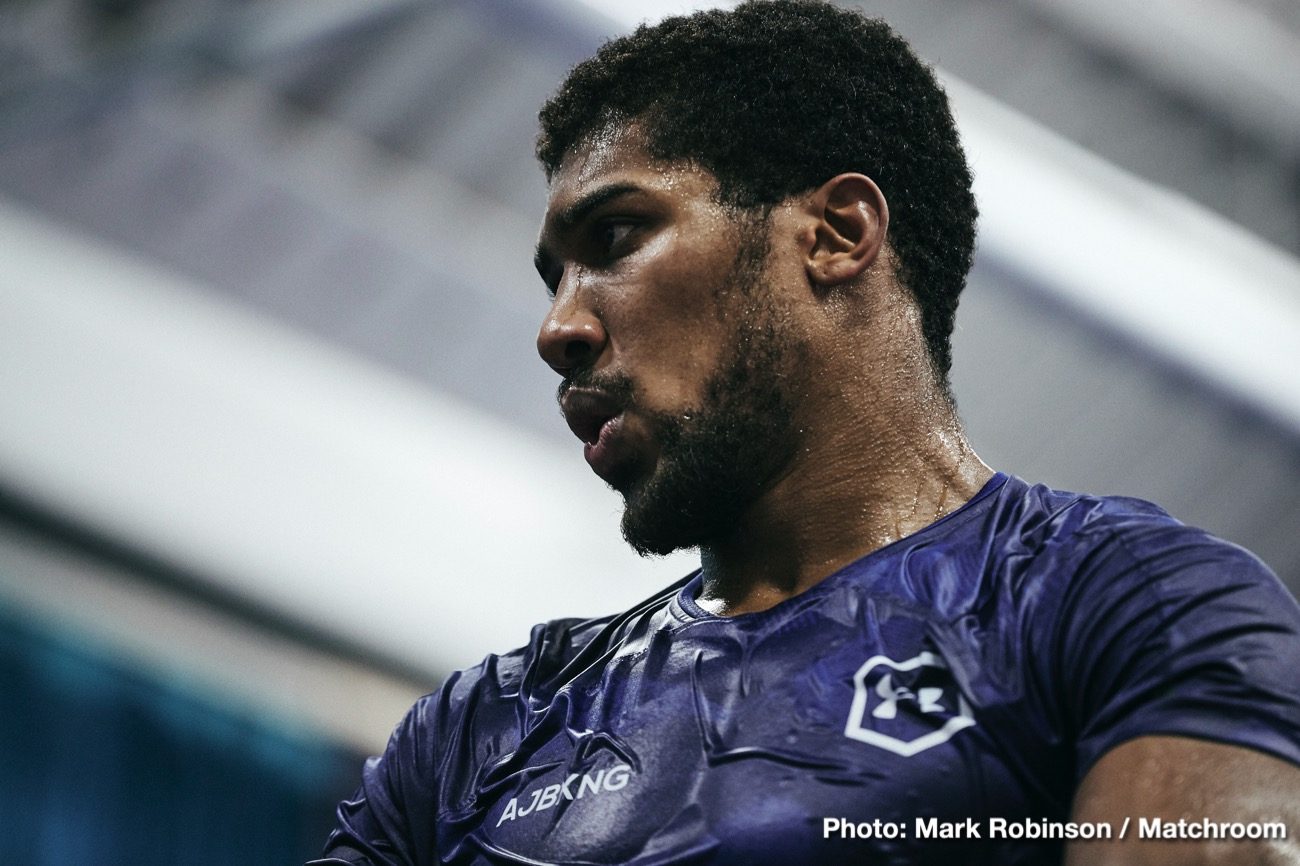 By Scott Gilfoid: Anthony Joshua says he WON’T retire from boxing if he loses to Andy Ruiz Jr. in their rematch on December 7 in Saudi Arabia. Joshua is vowing not only NOT to retire after a loss to Ruiz, but also that he’ll stick around the sport until he’s 50-years-old.

Joshua says the people that want him to retire after his next loss aren’t ones that told him to get into the sport in the first place. As such, he’s not going to listen to them when they tell him it’s time for him to leave boxing.

“It is weird because you get, ‘If you lose your next fight you should retire.’ I say, ‘You didn’t tell me to get in the gym so who are you to tell me to get out of the gym?’ I swear I’ll fight till I’m 50. I fight because I love the game.” said Joshua to the Gloves Are Off.

Joshua is talking bold right now obviously, since he’s only got one loss on his record. But what happens when all a sudden, Joshua has 10 defeats, and he’s getting batted around by all the good heavyweights? Will Joshua still want to continue on until he’s 50 or will he listen to his well-meaning critics and retire?

Only Joshua knows if he’s serious about fighting until he’s half a century old, and it’s very likely that circumstances will convince him do otherwise. We saw what happened with Audley Harrison and Danny Williams when they continued to fight after they were over-the-hill. It would be a terrible shame if Joshua’s career ended up in the same way as those two British heavyweights.

Joshua seems to think that it’s his critics that will be calling for him to retire if he loses to Ruiz. That’s probably not the case. There are a lot of Joshua’s loyal fans that will want to see him retire, because they won’t want to see him wind up as a trial-horse for the young heavyweights coming up. That’s the bitter inevitable outcome for ANY heavyweight that sticks around the sport until their 50.

Joshua’s WILY promoter Eddie Hearn will likely work his old magic to keep the money train rolling on the tracks as long as possible by matching him against soft opposition that he’s capable of beating. In other words, Hearn will go back to matching Joshua the way he did since he turned professional in 2013.

It obviously a mistake for Hearn to put Joshua in with a good fighter like Ruiz, because he was exposed by him. The boxing world saw for the first time how flawed Joshua truly is, and they didn’t like that they saw.

Taking the stubborn approach to facing the reality of what his career is a wrong-headed move on Joshua’s part. If things do turn out poorly in his rematch with Ruiz on December 7th, retirement is a perfectly acceptable option for Joshua. There’s nothing wrong with admitting that you don’t have the game to beat the best.

Joshua would have reached this fork in the road in 2017 in his fight against Wladimir Klitschko if the Ukranian had the sense enough to realize that he needed to finish him once he had him down in the 6th. If Wladimir had done what he was supposed to have done, Joshua would have been knocked out, and he’d have needed to ponder the retirement question a lot sooner.