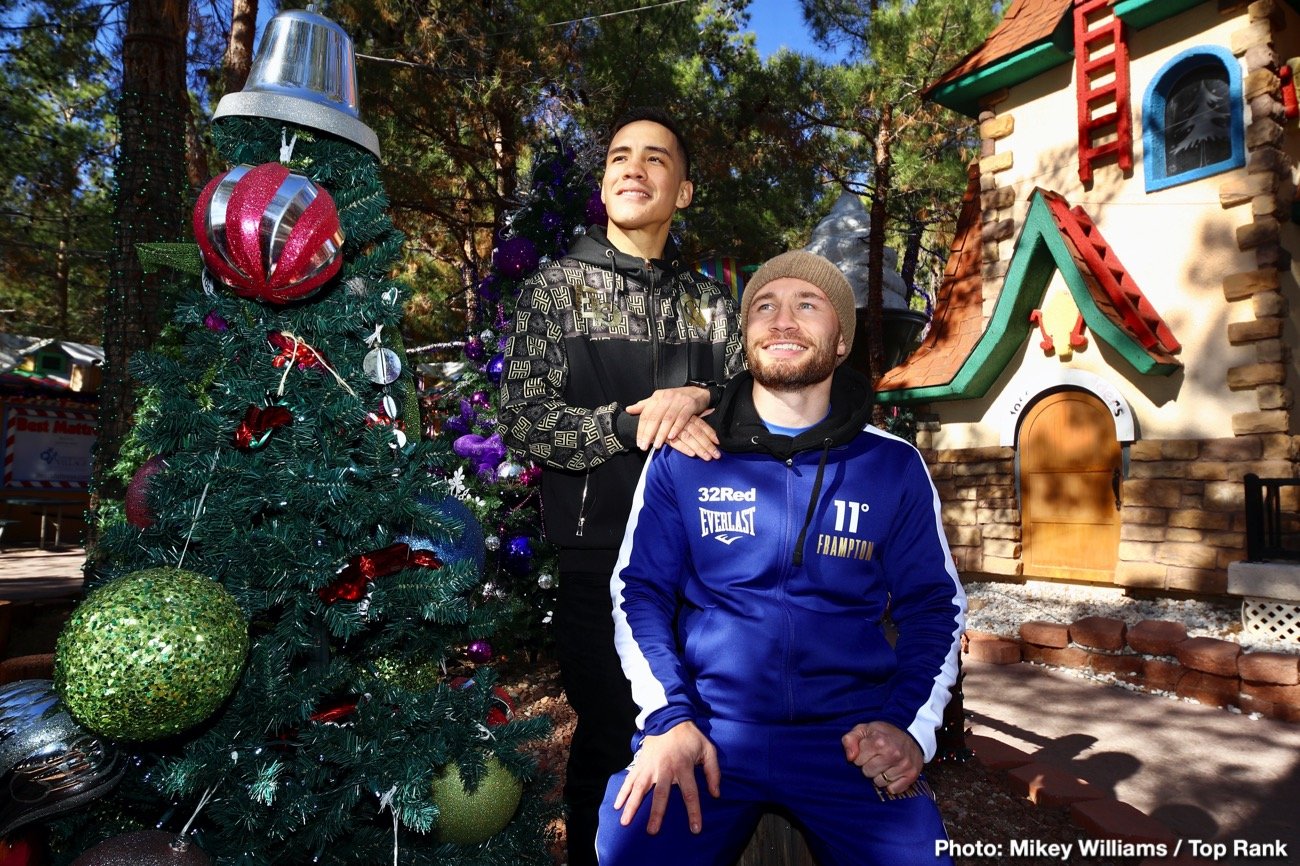 Frampton (26-2, 15 KOs) is coming off nearly a one-year absence from the ring, as his planned August comeback bout was postponed after a freak accident at the fight hotel left him with a broken hand. Valdez (26-0, 20 KOs) made six defenses of his WBO featherweight world title before moving up to seek challenges against the likes of Frampton and WBC world champion Miguel Berchelt.

This is what Valdez and Frampton had to say about their upcoming bouts and their visit to Opportunity Village.

“Making weight won’t be as difficult for me at 130 pounds. It won’t be easy, but not as hard as it was when I was fighting at 126. I have more energy in the gym and I feel healthy, which is the most important thing. You’ll see the difference in my fight Saturday against Andres Gutierrez.”

“I’ve been fighting at 126 my whole career, so it’s a long time coming. My last camps were more about cutting weight rather than training. It wasn’t healthy for me. I wasn’t eating much two, three days before the weigh-ins, so now I am in a much healthier position.”

“I want to fight Miguel Berchelt. Listen, there’s no personal beef there, but I feel like he’s the top guy at 130 pounds. I want to fight the best, and Berchelt is the best. I’m only focused on Gutierrez for now, but I also visualize the future.”

“Fans know I always give 100 percent in the ring, so you can expect a great battle on Saturday night. Andres Gutierrez is a tough guy who cannot be overlooked.”

On the visit to Opportunity Village

“Seeing this makes everyone want to be a better person and try and help our loved ones. If we can, why not support the great people at Opportunity Village? I thank them for their hospitality.”

On the injury that postponed his August fight

“I was upset at the time. I felt like a whole camp had been wasted, time away from my family had been wasted. Look, you just have to deal with it and move on and kind of try and forget about it and move on. I’m looking forward to the fight. By the time the fight comes around, it will be {nearly} a year since I’ve been in the ring.”

“McCreary is a good, hungry, young, undefeated kid, and this is his big chance. If he beats me, I’m pretty sure in his next fight he’ll fight for a world title. It’s not going to happen. I’ve prepared very hard for this fight. I’ve prepared like I’m an underdog, and I am going in to put on a show. To be honest, I want to win this fight, but I want to knock this kid out.”

On his future plans

“I’ve had some huge fights in my career. No matter who the opponent is, it’s always going to be the biggest fight because of the situation I’m in now. It’s a must-win. I have to win this fight to fight a champion in my next fight. I want to fight for a world title in my next fight, so I must beat Tyler McCreary.”

“The plan is to become a three-weight world champion. That’s my goal. Ireland has a rich history in boxing champions. We’ve produced so many great fighters — and we’re still doing it — but to be the guy on top and be the first and only guy to win three titles in three different divisions, it would mean the world to me. I want nothing more than my kids to be proud of me and say that their dad is a three-weight world champion.”

On the visit to Opportunity Village

“Many of us have loved ones who may not be as able-bodied as we are. This facility is fantastic. It was great to take a look around see all of the amazing work they do. You should give back to the community when you are in a position to do it.”

Promoted by Top Rank, in association with Queensberry Promotions and MTK Global, tickets priced at $100, $85, $65, $45 and $20 (general admission) are available online at www.cosmopolitanlasvegas.com or through Ticketmaster at 800.745.3000. 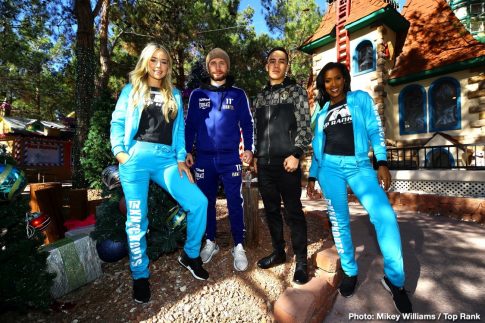 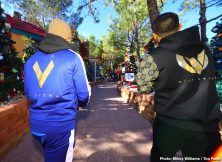 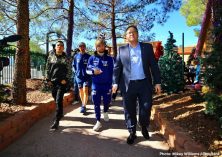 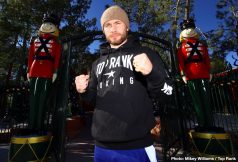 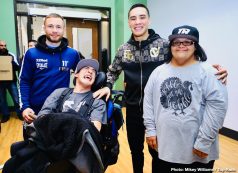 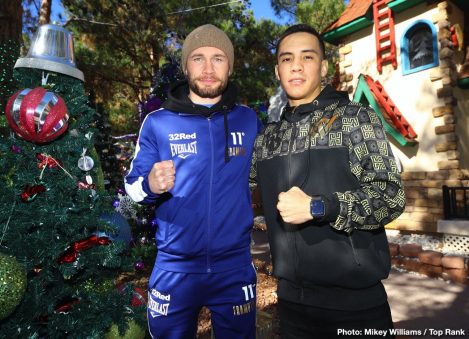 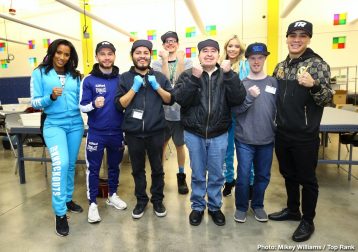 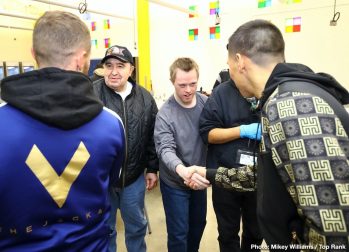 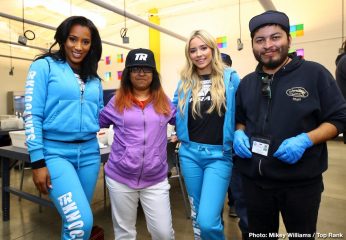 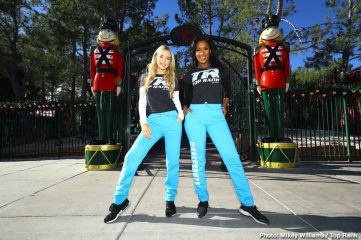 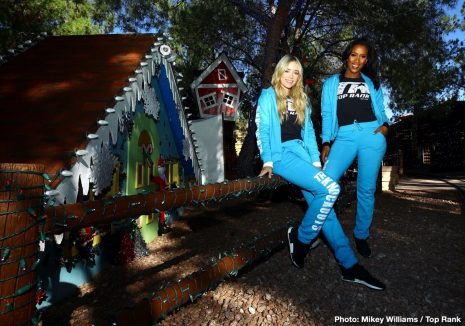 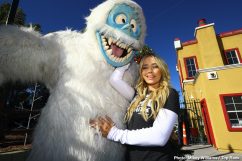 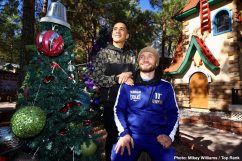 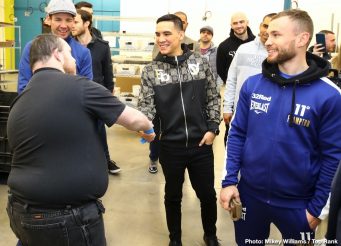 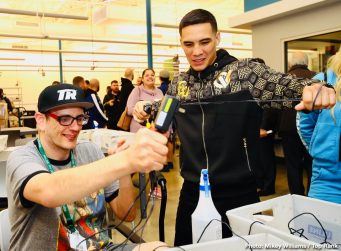 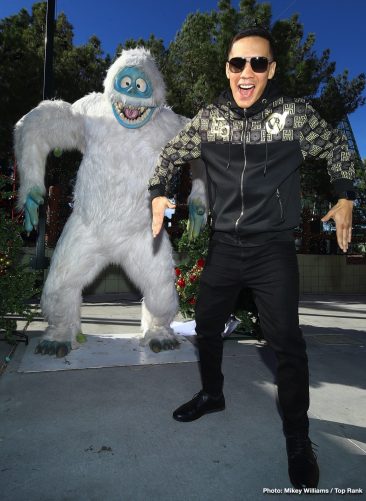 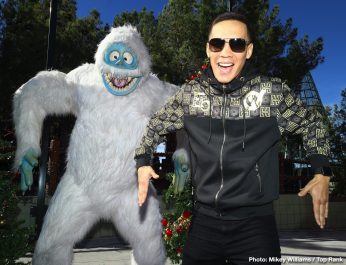 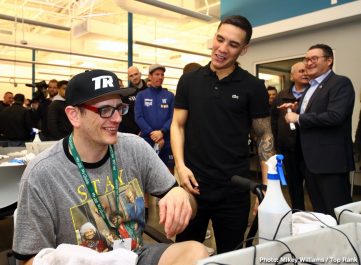 Top Rank on ESPN returns to Las Vegas, the Boxing Capital of the World, this Saturday, November 30 for a Thanksgiving Weekend super featherweight doubleheader at The Chelsea inside The Cosmopolitan of Las Vegas.  Former featherweight world champion Oscar Valdez makes his long-awaited super featherweight debut in a 10-rounder against former world title challenger Andres “Jaguarcito” Gutierrez in the main event.

The co-feature of the evening will see the fighting pride of Belfast, former two-division world champion Carl “The Jackal” Frampton, take on the unbeaten Tyler “The Golden Child” McCreary in a 10-round super featherweight contest.

Valdez-Gutierrez and Frampton-McCreary will stream live and exclusively in the United States on ESPN+, the leading multi-sport streaming service, starting at 10 p.m. ET (undercards beginning at 6:30 p.m. ET). The undercards will feature junior middleweight contenders Carlos Adames and Patrick Teixeira for the WBO interim title.