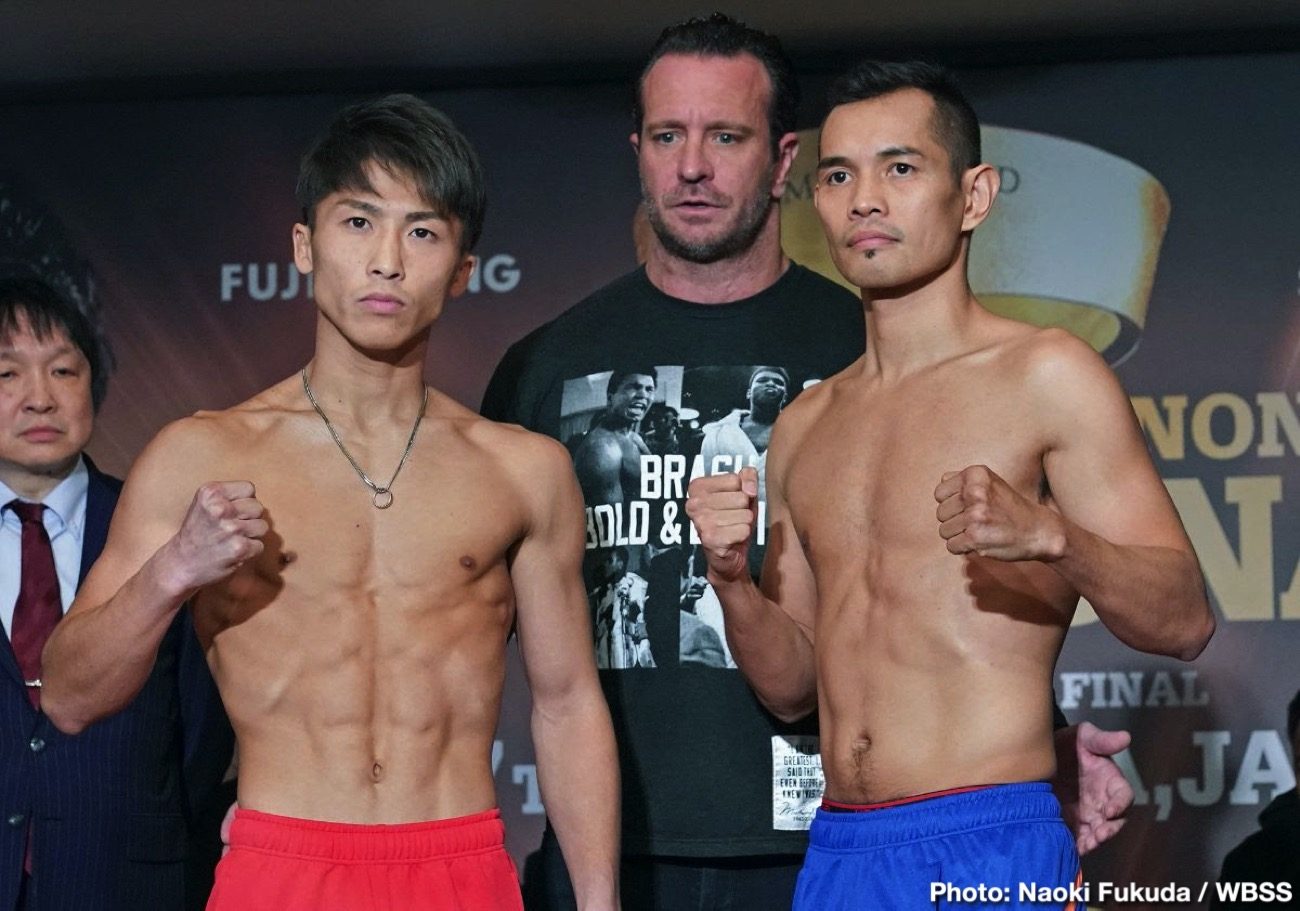 By Chris Williams: Huge punchers Nonito Donaire (40-5, 26 KOs) and Naoya Inoue (18-0, 16 KOs) will be fighting Thursday night in a unification fight for their WBA & IBF bantamweight titles World Boxing Super Series in Saitama, Japan. This is the final of the WBSS 118-pound tourney.

Both fighters have stopped their two opponents, and it’s very likely that tonight’s match will end in a knockout. The winner of the match will receive the Ali Trophy. That doesn’t mean they’re best fighter in the bantamweight division though. It just means they’re the best in the WBSS tournament.

Unfortunately, the Inoue vs. Donaire undercard is filled with no name fighters once you get past the co-feature bout.

A lot at stake with Inoue-Donaire fight

For the Donaire vs. Inoue winner to stake the claim that they’re No.1 at bantamweight, they would need to beat Nordine Ouabaali, Luis Nery, Zolani Tete and Johnriel Casimero.

The boxing public will likely consider the Inoue-Donaire winner as the #1 fighter in the weight division, but until they face the above mentioned fighters, they won’t be the best in real terms. Former Nery (30-0, 24 KOs) might be the best of the bunch, and he would be a real problem for Inoue with his youth, power and body punching.

“A year ago this tournament started, a year later I am in the final against Nonito Donaire, and I am very grateful for that,” said Inoue. “I’ve been watching Nonito’s fights even before I became a professional, and he’s one of the fighters who I admire. I am truly proud of myself to be in the ring with him the day after tomorrow.”

Donaire MUST land his left hook to win

With the age, speed and talent on Inoue’s side in this fight, Donaire must land his left hook to win. Donaire wasn’t the same puncher at super bantamweight [122] and featherweight [126]. He found out the hard way that his power never fully carried up to those weight classes. But now that Donaire has returned to 118 after seven years, his power has returned.

Two guys Donaire faced at bantamweight in the WBSS tourney, Ryan Burnett and Stephon Young, folded quickly. They couldn’t stand up to Donaire’s punching power from his left hook. Landing that punch is the key for Donaire to try and win tonight.

Inoue is a great fighter, but he’s no different from anyone else when it comes to getting hit. As such, if Donaire is able to land his left hook cleanly, Inoue won’t last long. This fight could be over with quickly if Donaire is able to land his bread and butter puncher early. It’s not going to be easy though for Donaire to land that shot, because Inoue is fast, and he doesn’t stick around long after throwing. Inoue moves out of range.

Inoue’s bad habit of throwing a lot of body shots could put him at risk tonight. When Inoue throws his left hook to the body, he leaves his head unprotected. If Donaire catches Inoue at that precise moment, it’ll be all over. Inoue won’t see Donaire’s left hook to the head, and he definitely won’t recover if he gets hit clean.

Naoya has won world titles in three weight classes, but he’s NEVER fought any talented. It’s great that Inoue has titles, but you can argue that Donaire would beat everyone that he’s faced. There isn’t a name on Inoue’s resume that Donaire wouldn’t beat. Let’s be realistic here. Inoue has nice resume at first glance, but it’s filled with mediocre opposition that Donaire and other fighters would beat.

These are Inoue’s best names on his resume:

Those fighters are small, and not in the same class as Donaire. Narvaez lost a one-sided 12 round decision to Donaire in 2011 when he was still unbeaten. As far as Inoue’s resume goes, he doesn’t have anyone on there that can give one a good gauge of how he’ll do against Donaire. It would have been nice if Inoue fought some of the following fighters during his career:

If Inoue had fought some of those guys, then we could give a better estimate of his chances tonight.

The body punching of Inoue will be too much for Donaire, who hasn’t fought that type of fighter in years. The last time Donaire fought a body puncher was in his loss to Guillermo Rigondeaux in 2013. That was a close 12 round unanimous decision.

If Donaire isn’t ready for Inoue’s fast start, he’ll get stopped in the first two rounds. Other than that, this writer sees Inoue winning by a 6th round KO. Inoue will be more cautious against Donaire than he has in his previous 18 fights. Donaire isn’t someone that Inoue can bum rush, and blast out immediately.

If Inoue fights in a reckless manner tonight, he’ll get stopped. He’s going to get knocked out sooner or later with the way he fights. Whether that happens tonight or not will depend on if he gets hit by Donaire. The accuracy and timing from Donaire isn’t there anymore, as we saw in his last fight against Young.  It took Donaire six rounds to time the faster Young, and nail him with a left hook. In the first five rounds, Donaire was missing frequently with his power shots.

Takuma Inoue (13-0, 3 KOs) will be challenging unbeaten WBC bantamweight champion Nordine Oubaali (16-0, 12 KOs) in the co-feature. The 23-year-old Takuma is the younger brother of Inoue. The difference between them is HUGE. Takuma has largely weak opposition most of his six-year professional career, and has a KO percentage of 23.08%. This doesn’t look good for Inoue. He doesn’t have the experience, power or frankly the talent to beat Oubaali. Unfortunately, Takuma lacks the talent of his popular brother, and we’ll see that tonight.

The best win of Takuma’s career came recently against Tasana Salapat (52-1, 37 KOs) in December of last year. However, the Thailand fighter Salapat’s entire resume is filled with mediocre opposition. If you take away the lesser opposition Salapat has fought, his record is 0-1.

Salapat’s resume is filled with dreadfully poor opposition. Takuma Inoue is a good body puncher like his brother Naoya, but he’s not power or fast of hand. Moreover, Takuma has no experience against quality opposition, and that could be a problem tonight against Oubaali.

The 33-year-old Oubaali has a big advantage in experience over Inoue, and that’s going to be a factor tonight. Oubaali has fought the following fighters:

You can argue that those five guys would beat EVERYONE that Takuma Inoue has ever fought, including him. Oubaali hasn’t been messing around in his career, as he’s fought some good fighters. Diaz and Warren are both highly talented contenders.

Oubaali has a similar fighting style as Ray ‘Boom Boom’ Mancini, and he can punch. The withering pressure that Oubaali puts on the 23-year-old Inoue will be too much for him. Oubaali KOs Inoue in the 5th round. Naoya won’t like it, but that’s the way it goes. Hopefully, it doesn’t upset him too much, and cause him to fight with anger against Donaire in the main event.

Takuma is a decent fighter, but he’s completely unprepared for this fight. He’s been padding his record with fodder level opposition in Japan since he turned pro, and now he’s finally stepping up. Oubaali is the wrong guy for Inoue to be stepping up against, and this will end badly for him.