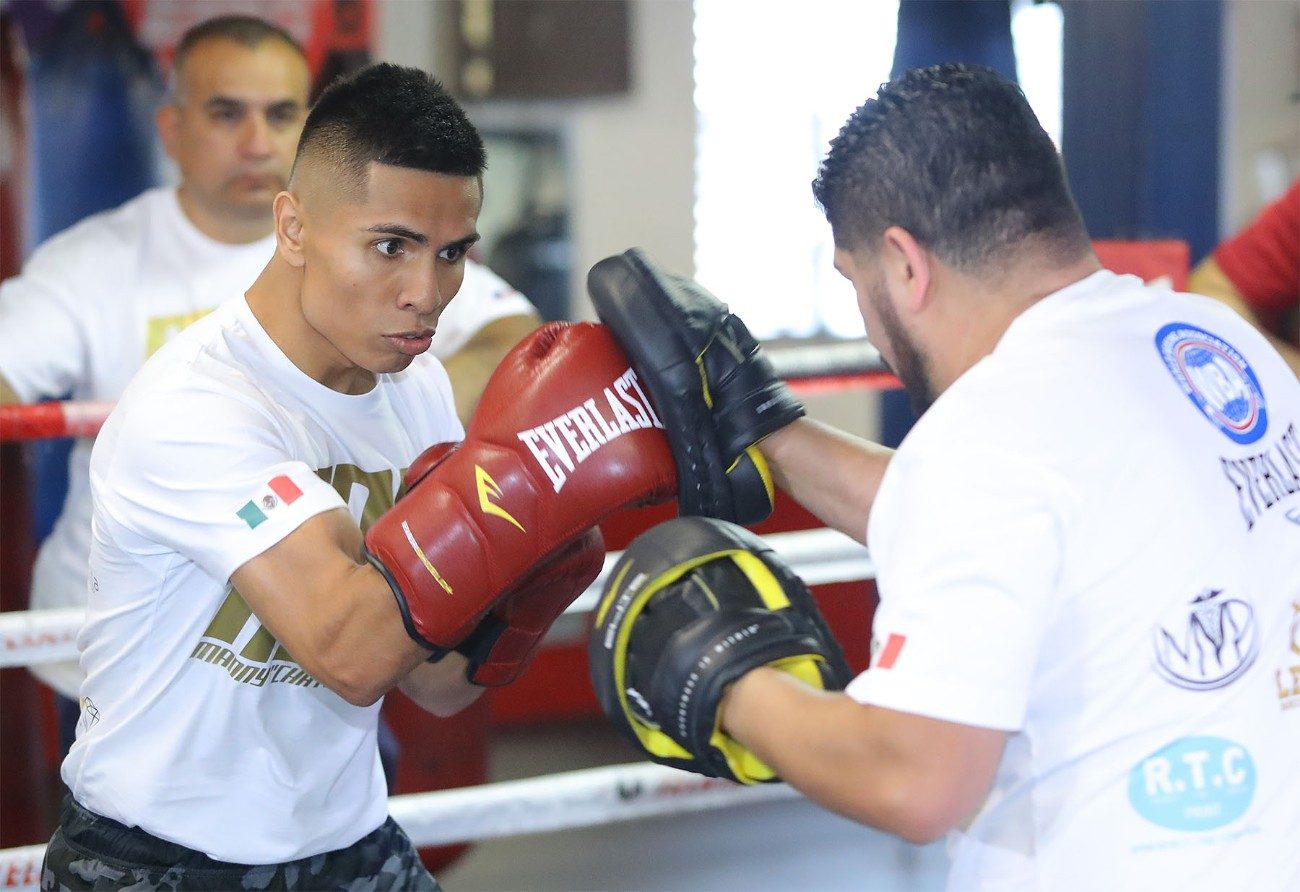 126-pound contender Manny Robles III (18-0, 8 KOs) hosted a media workout at Maywood Boxing Club in Los Angeles ahead of his 12-round fight against Xu Can (17-2, 3 KOs) for the WBA Featherweight World Title in the co-main event of Cancio vs. Alvarado II. Featherweight prospect Victor Morales Jr. (12-0, 7 KOs) also participated in the workout.The event will take place on Saturday, Nov. 23 at Fantasy Springs Resort Casino in Indio, Calif. and will be streamed live on DAZN.

Below is what the today’s participants had to say at the workout:

“Ever since I can remember, I have been boxing. I was a baby when I started boxing. But the first thing I can remember is being at LA Boxing, which no longer exists. The gym was full of great pros and fighters, and of course my grandfather was a trainer there as well. He was a great coach back in the day, along with my father. I remember being with both of them there.”

“Being around my grandfather and my father was a great thing. They were an excellent team. My grandfather was one of the best trainers around, and may he rest in peace. It was a great experience to be around such champions like Martin Castillo, Israel Vazquez and Reggie Johnson. They motivated me when I was little. It was something I wanted to do since I was a baby.”

“My amateur experience has a lot to do with where I am today. When I was an amateur, I was able to spar with world champions. That’s pretty crazy. I never cared about who I sparred with. My father taught me how to think, so I wasn’t scared to get in there with them. I was able to learn from the best and get experience. That helped me prepare for this moment of my career.”

“I was more technical as an amateur but being with Rudy Hernandez has taught me to sit on my punches more and use my body more. He taught me how to fight inside. My father trained me for pretty much my entire fight, but now Rudy Hernandez is my head trainer. It was a big sacrifice for my dad. It was something we decided to do. He understood that. It was a sacrifice he knew he had to do.”

“If I win this world title, it’s going to mean a lot. Growing up in this sport, it’s crazy to be here now and fighting for a world title. It’s a dream come true. If I could, I would tell my grandfather. ‘Thank you. Thank you for giving me that experience that you had and by being the great trainer that you were.’ I would also tell my father a lot of things. We are very close. We have a great relationship. He’s done so much for me. He’s made so many sacrifices. ‘Thank you, dad, for all the sacrifices that you’ve done for me and never giving up on me. Thank you for believing me since Day 1, when I was nine years old and had my first amateur fight at Azteca Boxing Club. I love you.'”

“Being promoted by Golden Boy is going to take me to the next level. I think it’d already be at a world title level if I had started my career with Golden Boy. A year or two from now, I want to have a junior title. Maybe I can already be in line for a world title in a year or two. It’s going to be a great card this Saturday. It’s a great platform and I am excited for this fight.”

Cancio vs. Alvarado II is a 12-round fight for the WBA Super Featherweight World Title presented by Golden Boy. The event is sponsored by Tecate, “THE OFFICIAL BEER OF BOXING,” and Hennessy “Never Stop. Never Settle.” The event will take place Saturday, Nov. 23 at Fantasy Springs Resort Casino in Indio, Calif. and will be streamed live on DAZN. The title defense is one of several highlights this fight season on DAZN – an entire fall featuring boxing’s biggest matchups in one of the best schedules in boxing history.

Tickets for the event are on sale and are priced at $35, $45 and $55. Tickets
will be available at the Fantasy Springs Resort Casino box office, by calling 1-800-827-2946, or by purchasing online at www.fantasyspringsresort.com.