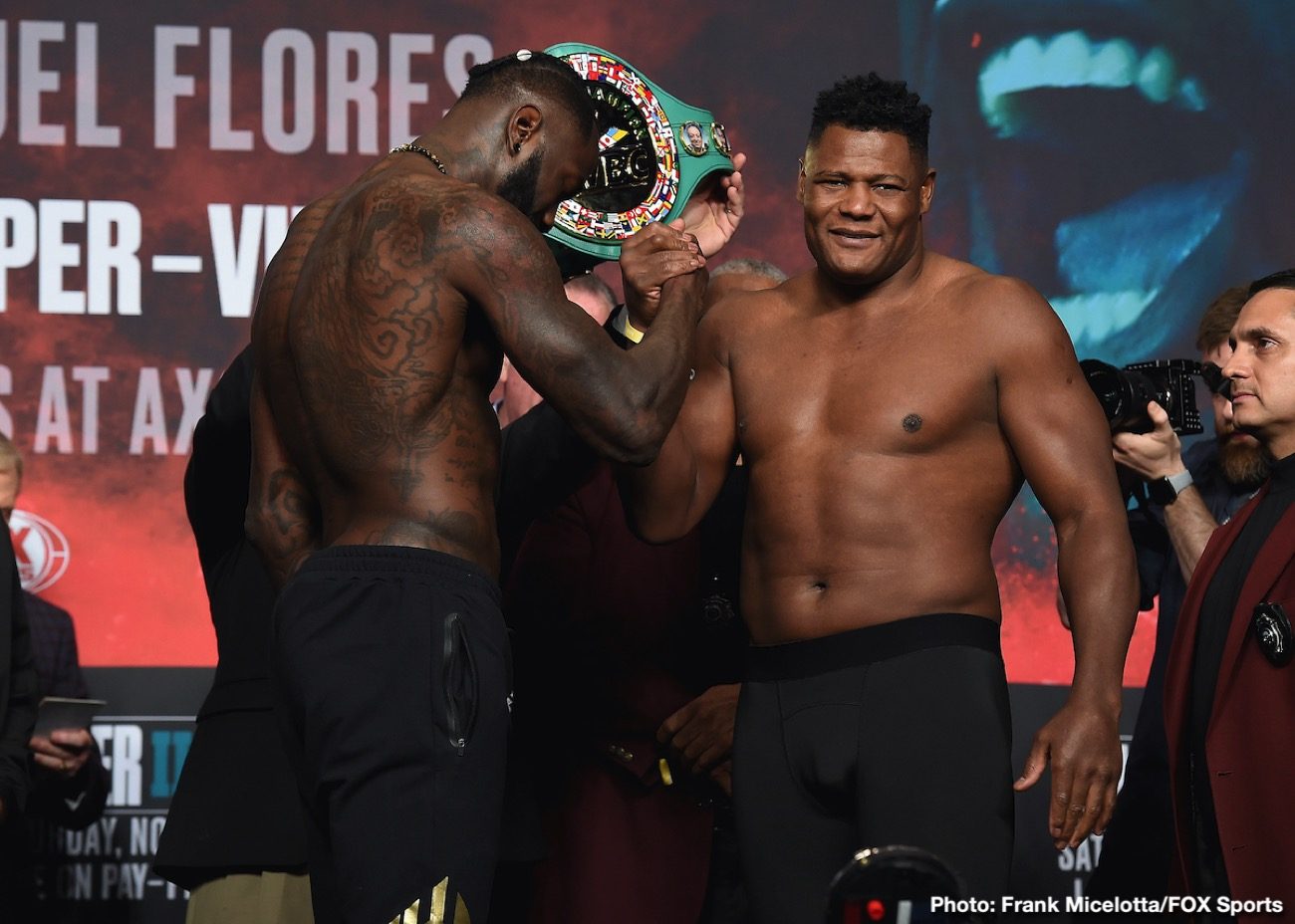 The WBC Silver Bantamweight Championship match between Luis Nery and Emmanuel Rodriguez is off of the Deontay Wilder vs. Luis Ortiz II FOX Sports PBC Pay-Per-View card at the MGM Grand Garden Arena this Saturday, November 23.

Leduan Barthelemy (15-0-1, 7 KOs) will take on Eduardo Ramirez (22-2-3, 9 KOs) in a 10-round featherweight bout in the pay-per-view opener. Barthelemy and Ramirez were slated to appear on the televised prelims on FS2.

The rest of the card is unchanged. Boxing’s longest reigning heavyweight champion Deontay Wilder will defend his WBC title against Cuban slugger Luis Ortiz in the main event, plus three-division world champion Leo Santa Cruz takes on Miguel Flores for the vacant WBA Super Featherweight title in the co-main event.

Watch the whole video HERE as Wilder gives his thoughts on boxing rematches such as Ali-Frazier III, Holyfield-Tyson II, Pacquiao vs. Marquez IV and more.

Wilder passed the only rematch test of his career so far with flying colors, stopping Bermane Stiverne in the first round of their 2017 duel, after Wilder originally taking the title from Stiverne by decision in 2015. On November 23, Wilder will look to carve out his place in the history of great boxing rematches and rivalries by giving fans another memorable title defense.

Wilder first examined his explosive ninth-round knockout of Artur Szpilka, which took place in January 2016 as Wilder successfully made his third title defense.

NEWS:   Tyson Fury: I've only got 2 or 3 fights left, I have no more challenges

“It was amazing because Szpilka had a lot of Polish fans there and it was incredible to hear the roar,” said Wilder. “He was a tricky southpaw, but I ended up figuring him out and drawing him into the corner. Then bam! It was good night.”

Boxing’s longest reigning heavyweight champion then reviewed his November 2017 destruction of former champion Bermane Stiverne. Wilder stopped Stiverne in the rematch after Stiverne became the first fighter to go the distance against Wilder when he lost the title to him in 2015.

“This was the guy who I had taken the title from,” said Wilder. “I told him that I knew him like the back of my hand. In that fight, I wasn’t myself. I was possessed. Something had come over me. I remember the referee ended up on my back and I was carrying him like a cape that night.”

Finally, Wilder highlighted his latest triumph, a first round dismantling of Dominic Breazeale with a monster right hand that immediately went viral and gave the champion his ninth consecutive successful title defense.

“If you didn’t see that fight, go back and look at it,” said Wilder. “I took his soul out of him. I’ll never forget that knockout.”