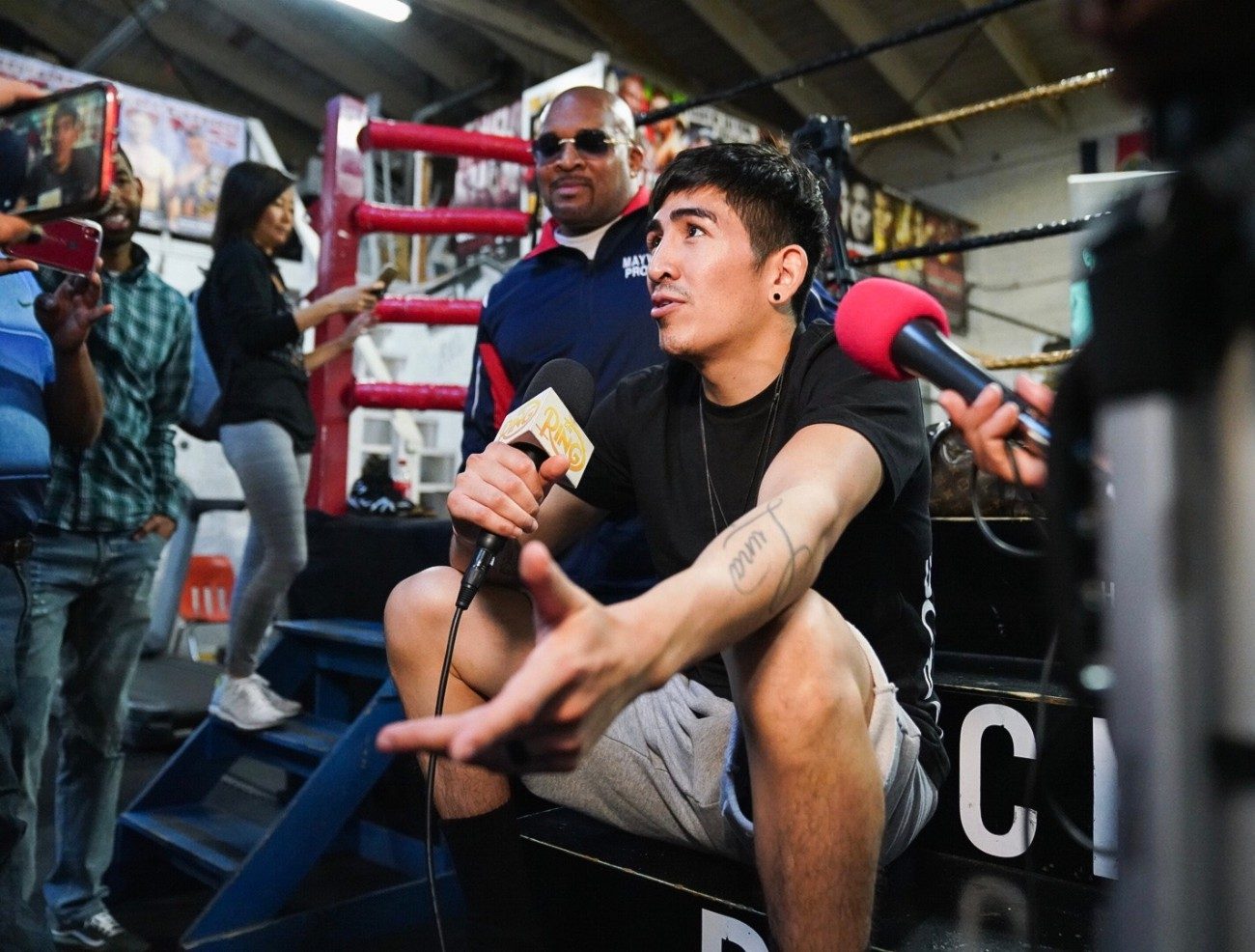 By Aragon Garcia: Leo Santa Cruz says he wants to fight Gervonta ‘Tank’ Davis to show the fans that he’s not afraid of him. He wants that fight either at 130 or 135. Santa Cruz care which weight the match takes place. The 31-year-old Santa Cruz is ready to beat Gervonta, and enter into the top pound-for-pound listings among the greats.

Santa Cruz (36-1-1, 19 KOs) is looking to win his fourth division world title this month against Miguel Flores (24-2, 12 KOs) on November 23 on Fox Sports pay-per-view at the MGM Grand in Las Vegas, Nevada. Santa Cruz and Flores are fighting for the WBA Super World super featherweight title.

For Santa Cruz to get a fight against former IBF/WBA super featherweight champion Tank Davis (22-0, 21 KOs), he’ll probably need to move up to lightweight. Davis is fighting for the vacant WBA ‘regular’ lightweight belt on December 28 against Yuriorkis Gamboa in Atlanta. After six years as a professional, the 24-year-old Davis has outgrown the 130-lb division.

“Yeah, hopefully when I win this fourth division [world] title], it’ll put me up there. When I win it, I think the fight that will get me up there is Gervonta Davis. When I fight him, that’s when I’ll be up there. I’m going to go out there, and I want to win by knockout. I’m going to go out there and try and get him out of there before the 12th round, but we’re going to be both smart and try and get the win. If the knockout comes, good for us. If not, then we’re going to get the win and the four world title.

“Yeah, I heard he say that he’s the real WBA champion, but he’s with Golden Boy. But if they can make it, I’ll fight,” said Santa Cruz when asked if he’d like to face WBA super featherweight champion Andrew Cancio.

Santa Cruz will be proving his doubters wrong by moving up to 135 to face Tank Davis. Right now, boxing fans think he won’t take the risk of facing the dangerous Gervonta. Santa Cruz isn’t afraid of Gervonta, and he can’t wait to take him on.

“Yes, of course,” said Santa Cruz to Fino Boxing when asked if he wants to fight Gervonta Davis. “I think Tank Davis is one of the best right now I’d like to fight him, and show people I’m not scared to fight nobody. And I think Lomachenko is a great fighter, but I think if they fought, Gervonta would win.

“I think he’s stronger than Lomachenko. And I think that’s a great fight, but I think Gervonta is too strong, and I think he’s going to probably knock him out,” said Santa Cruz when asked about his thoughts on the Tank Davis vs. Yuriorkis Gamboa fight.

Vasiliy Lomachenko has proven to be a great fighter, but at age 31, he’s getting old. We’ve seen a drop off in Lomachenko’s performances over the last year, and he’s no longer coming out of his fights unscatched like he’d done in previous years.

While Lomachenko’s boxing fans blame his deteriorating performances on him fighting at lightweight, it looks more to be the case of him just getting older. 31 isn’t old for most fighters, but it obviously is for Lomachenko. The two-time Olympic gold medalist had close to 400 amateur fights in Ukraine. Despite being a great amateur in the past, Lomachhenko has a lot of mileage on the odometer.

“I think the heavyweights are strong and explosive. They can get each other out at any second, but I think Wilder is stronger and in his prime right now. I think he’s going to win it,” said Santa Cruz in predicting a win for WBC heavyweight champion Deontay Wilder over challenger Luis Ortiz in their rematch on November 23. “Yeah, I think Wilder is the best in the division.

“He’s the best heavyweight right now, and I don’t see anyone beating him right now,” said Santa Cruz. “I think Andy Ruiz is a top heavyweight, but I think the power Wilder has will be dangerous for him. When Wilder catches you, he can knock you out at any time.

Yeah, I think so,” said Santa Cruz when asked if he thinks Wilder will beat Tyson Fury in their rematch on February 22.

“I think in this fight, Wilder may even win by knockout. In the first one, he got him [Fury], and I thought he was out, but he got up and finished like a champ. I think it could be, because with that big of a cut in the rematch, it might open,” said Santa Cruz about the huge cut that Fury sustained in his last fight being a problem for him against Wilder.

“If it opens, it may even stop the fight because of the cut. I still have the motivation. Maybe two more years,” said Santa Cruz when asked how much longer he wants to continue fighting,” said Santa Cruz.

Tyson Fury was coming apart in the last three rounds of his contest against Wilder last December. Although some boxing fans say Fury’s problems were a result of him running out of gas, the real reason is that Wilder had figured him out.

Wilder stopped falling for Fury’s feints, and started nailing him with right hands. It was only a matter of time before Fury was knocked out. Luckily for Fury, the referee gave him a break by giving what appeared to be a long count after Wilder dropped him in the 12th. In the Wilder-Fury rematch scheduled for February 22, Wilder won’t show any respect for him, and this fight will likely end quickly with Fury being knocked cold.

“I think 130 will be his division because he’ll be a lot stronger at the weight, and he’s got plenty of experience. Again, he’s a problem for anybody at 130, any of the top guys. He’s all about fighting all the big fights, and that’s what he’s looking to do at 130,” said Ellerbe about Santa Cruz.

Santa Cruz has moved out of the featherweight division, and is now making his home at 130. Ellerbe will soon be saying that he’s the #1 fighter at 130. We’ll never know for sure though because Santa Cruz won’t likely fight WBC champion Miguel Berchelt or WBO champion Jamel Herring due to them being with Top Rank.