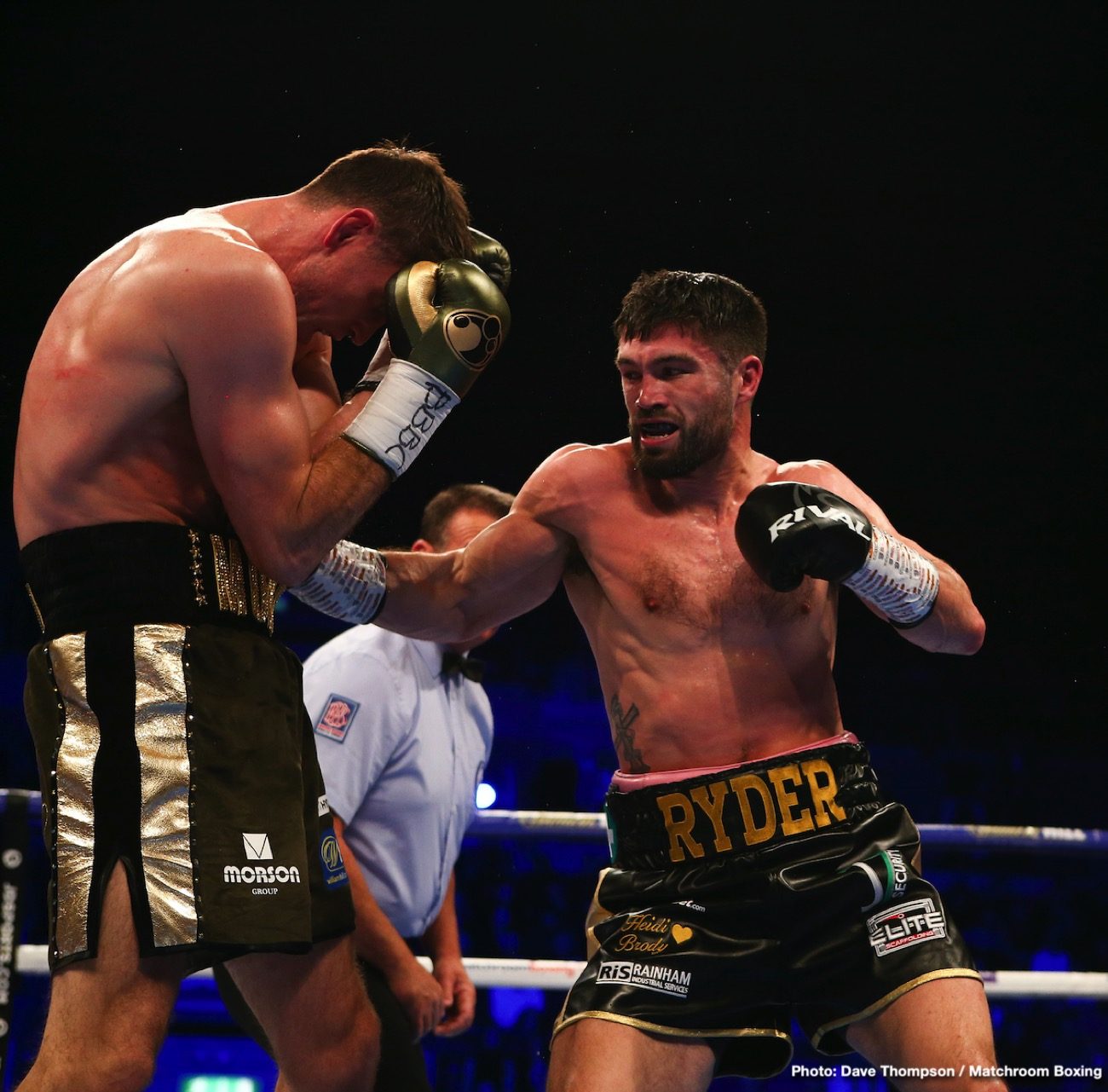 By Charles Brun: Callum Smith’s trainer Joe Gallagher was FURIOUS when asked if John Ryder would be given an immediate rematch following his controversial 12 round unanimous decision loss last Saturday night at the M & S Bank Arena in Liverpool, England. Gallagher is unhappy that fans think his fighter lost to Ryder, as he saw it as a clear win.

Smith (27-0, 19 KOs) successfully defended his WBA Super World 168-lb title against mandatory Ryder, albeit by a QUESTIONABLE decision. Smith won the fight by the scores 116-112, 117-111, 116-112, but the boxing public had Ryder winning by 2-4 rounds. Gallagher is complaining that Callum isn’t being given enough credit for his win.

When asked if the deserving Ryder (28-5, 16 KOs) would be given a rematch, Gallagher exploded, saying, “F— off asking me for a rematch. Are you taking the p—. You are absolutely taking the p—.”

Gallagher seemed to come unglued when the subject of a rematch was brought up.  It’s hard to understand why. Ryder had Callum feeling in the championship rounds, and fought well enough to deserve the victory.

“I give him credit, he landed some good body shots, uppercuts, and got involved in some shootouts,” said Gallaghter in discussing Ryder’s performance. “Once Callum had ticked seven rounds, 8 rounds, the fight was won. Listen, everybody is entitled to their own opinions.

“They fought out of their skins, and Callum today felt he underperformed. But at the end of the day, it’s about getting the win, as they say. This time next week, this will be fish & chips paper, you know what I mean?

“Callum Smith just fought, and you’re talking about a rematch. Go talk to Ryder’s team. We just fought our mandatory, and we’ve got to move on, and we’re going after unifications and big fights.

“They’ll only get a rematch if Eddie [Hearn] goes and lobbies with the board, Commissions, and sanctioning bodies, and he [Hearn] said it won’t be. So that’s it,” said Gallahger.

It’s shocking the anger that flashed on Gallagher’s face when asked about Callum giving Ryder a rematch. What Gallagher doesn’t understand is the boxing fans aren’t going to forget Callum’s questionable victory, and likely neither will the top fighters like Canelo Alvarez. They might want anything to do with Smith with him being followed around by the skunk-like taint of his questionable win over Ryder.

There are some instances in a fighters career where they can walk away from a controversial win, but this isn’t one of those instances. If this was a fight that no one saw in a far off land, and the match went under the radar of the public. That’s not the case in the Callum vs. Ryder fight. The fight fight was seen both in the UK, and in the U.S. Canelo obviously will have seen it too, and he won’t want to fight Callum.

Gallagher: Callum not being given enough credit for win over Ryder

“There’s not enough celebration, there’s not enough credit,” said Joe Gallagher about the media not giving Callum credit for his win over Ryder at the post-fight news conference. “Callum fought his mandatory challenger tonight. He came with a good game plan, Callum came out the winner, and I walked out into there and it was like the last British fighter to defend the Ring belt was like 11 years ago. Not enough people are giving Callum Smith credit that he should be.

“He had a tough fight, his mandatory challenger, and he won. At the end of the day, when you go in there, you’ve got to come out with the win, and he got the win by any means necessary. I had the fight 8-4 or 7-4 with one even, but his people are saying they’re lobbying for a rematch and stuff like that.

“And I must have seen something totally different in there,” said Gallagher about the Smith vs Ryder fight results. “I understand after six or seven rounds, I had Callum losing only one round, and John Ryder had some good moments in some rounds. But just because there’s the expectation that he wasn’t expected to do that, and landed some good shots, doesn’t mean he won the round. A lot of the shots were arms and gloves,” said Gallagher.

It’s patently obvious why fans and the boxing media aren’t giving Callum Smith credit for his “victory.” They saw him losing. Gallagher needs to wake up and understand that what the fans saw last Saturday was entirely what he saw. Callum was seen as the loser by fans, and that’s the entire problem.

“Yeah, I think Canelo wants the fight. His manager, trainer Eddey Reynoso doesn’t want it,” said Gallagher in talking about Callum wanting Canelo fight next. “They liked Billy Joe last week. I didn’t hear many people screaming that kid [Coceres] wants a rematch with Billy Joe. That was close until he put him out.

I do think that sometimes. It was a bad performance. Sometimes you’ll put in a bad performance to get the big fights. I think there’s a silver lining already. Callum Smith still wakes up Sunday morning as the 168 world champion, Ring Magazine champion. The only one in Britain, the UK pound-for-pound fighter, the Boxrec #1, and it’s about time people start giving the kid the credit he’s due,” said Gallahger about Callum.

At this point, Smith might have wrecked any shot he had at getting a fight against Canelo Alvarez with the way he fought against Ryder. It would be best for Smith to aim for a lower target like Billy Saunders, Demetrius Andrade, Gennadiy Golovkin, David Benavidez or Caleb Plant.

After what Canelo went through in his last fight against the shot to pieces Sergey Kovalev, it’s important that he faces a fighter that is looking good. Callum doesn’t fit that description.

“I think Billy Joe and Callum need the juicy fight to get them going, and I think John Ryder was a good challenger tonight,” said Gallagher. “He fought out of his skin, and he was nearly there, but it just wasn’t good enough.

“Callum defended his titles, and that’s what you got to do. We’d all love to see Callum win explosive in 3 or 4 rounds every time, but even Floyd Mayweather. I can’t say that, because I’ll get slated for that. I’m just saying good boxers, #1 in the world, have to grindout wins sometimes on points, and something like that,” said Gallagher.

If Callum can’t beat the less popular fighters without being motivated, then that suggests that he’s not a complete fighter. If Gallagher can’t fix that problem with Smith, it’s going to be tough for him to hold onto his title for too much longer. He was already seen as the loser in the Ryder fight.

What happens when Smith fights someone a little bit better than Ryder, and once again he’s not motivated? It sounds like an excuse from Gallahger, who isn’t confronting the problem that Smith has. He’s got a lot of holes in his game, and he comes unglued when dealing with pressure. Ryder had Smith falling to pieces with the pressure he was putting him under.