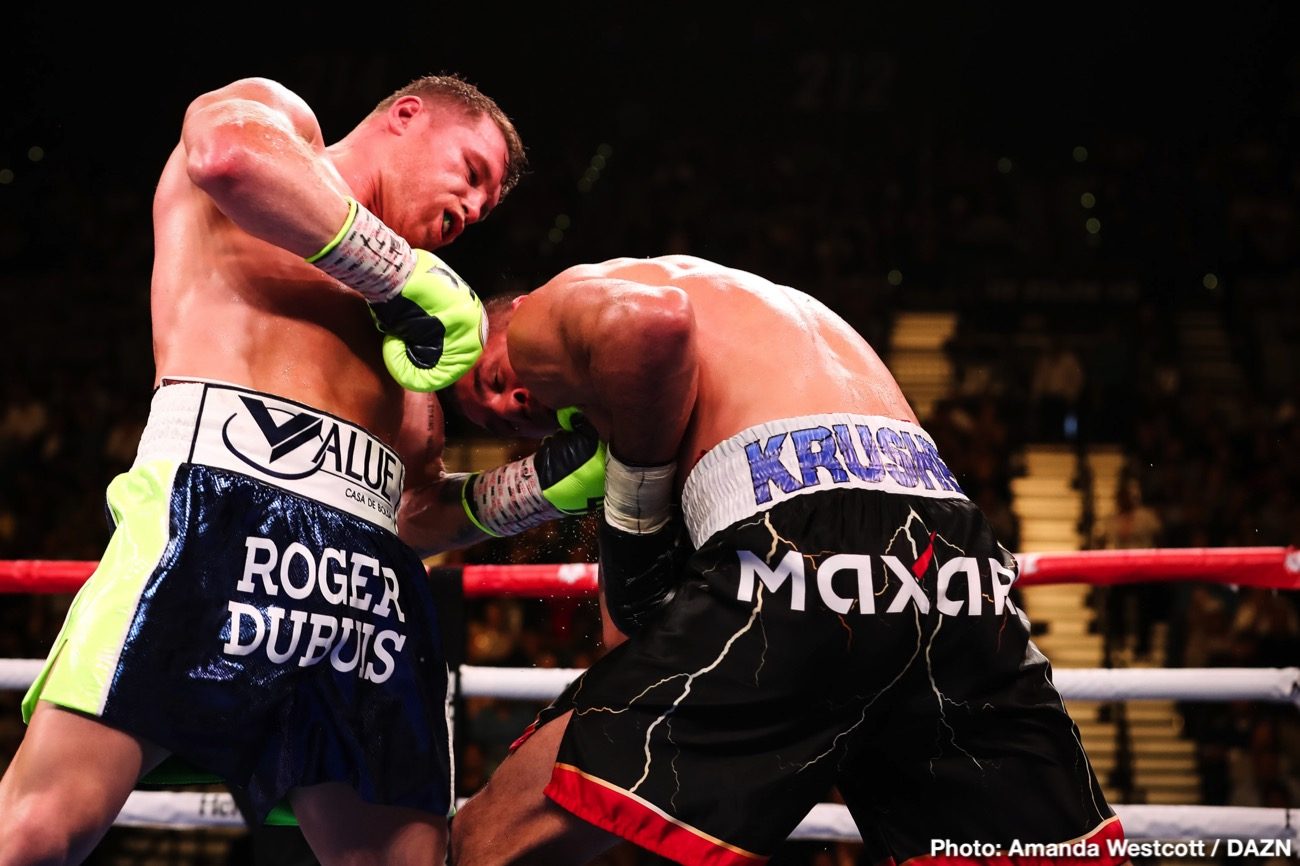 By Kenneth Friedman: Saul Canelo Alvarez failed to bring a lot of fireworks for his fight last Saturday night against WBO light heavyweight champion Sergey Kovalev, according to Jeff Mayweather. He saw their fight as boring one until Canelo Alvarez (53-1-2, 36 KOs) scored an 11th round knockout over an old and tired 36-year-old Kovalev.

The boxing fans at ringside at the MGM Grand in Las Vegas were booing both fighters for a lack of action in the fight. You can’t say that the 5’8″ Canelo wasn’t trying to mix it up against the taller 6’0″ Kovalev (34-4-1, 29 KOs). Canelo is a counter puncher, and he’s a short fighter with who doesn’t throw a lot of punches. On top of that, Canelo has MAJOR stamina problems that surface in the second half of his fights.

All those factors combined made last Saturday’s Canelo vs. Kovalev fight about as interesting as watching paint dry on a fence on a hot day. It wasn’t thrilling to watch compared to Canelo’s second fight against Gennadiy Golovkin. That was a fun fight to watch. Their first match in 2017 was a dull one as well with a lot of the action taking place from the outside.

“I thought Canelo would win, and that he did,” said Jeff Mayweather to Fghthub. “I didn’t think the fight would be that boring. It was an extremely boring fight. That’s because Kovalev, the bigger man, didn’t impose his will on Canelo. And he was backing up all the time. You’re not going to beat a guy with better skills than you backing up. I don’t care about the size. Everybody talks about how great his jab was,” said Mayweather about Kovalev. “All he did was jab at his gloves. He didn’t jab at his face.

“It was an extremely boring fight before the knockout. I still had Canelo winning, and I had him up two or three points. The rounds were so boring that it was hard to pick who was winning. I was giving Canelo rounds because he was imposing his will. I don’t know if it’s the end of him [Kovalev], but when you lose against a guy that jumped up two weight classes, it’s something to think about. He’s getting older. He got a nice payday. It might be time to pack it in, and enjoy the fruits of your labor,” said Mayweather.

Jeff thinks the 36-year-old Kovalev needs to consider hanging up his gloves after this loss. He thinks that this performance showed that he might need to walk away. The decision will be up to Kovalev. He’s probably thinking he could have done better if he’d been aggressive, and let his hands go with his power shots. It doesn’t matter what Kovalev thinks. He failed to fight the right fight, and he ended up losing.

“No, I’m tired of seeing that,” said Mayweather when asked if he’s interested in seeing Canelo fight Golovkin a third time. “I’m going to be honest. I thought Canelo beat him in the first fight, and I thought he beat him easier in the second fight. So what’s the point of it? I don’t know.

DAZN wants to see Canelo fight Gennadiy Golovkin a third time, and so does a lot of casual boxing fans. There aren’t any fighters at 160 that have enough name recognition for Canelo to fight other than Golovkin. Mayweather might not like the idea of Canelo and GGG fighting again, but that’s what DAZN wants. Canelo won’t fight WBC champion Jermall Charlo because he would he’s almost as big as Sergey Kovalev, and he’s not old. Charlo fights on Showtime, and that messes things up for Canelo and DAZN. The only middleweights worth it for Canelo to fight is Golovkin, Demetrius Andrade and Sergiy Derevyanchenko.

Canelo says he can go back down to 160

“Yes, it’ll be difficult. It’s always been difficult for me to lose weight,” said Canelo at the post-fight news conference last Saturday night in responding to a question about whether it’ll be hard for him to go back down to 160. “However, we must continue creating history, and I can do it.”

The fact that Canelo bothered to mention that he can drop the weight to return to the 160-lb division suggests that he’s going to do that. It won’t be easy for Canelo to beat Golovkin, Andrade or Derevyanchenko. Those are all hard fights for him, because he would be facing guys that would be hitting him hard. They wouldn’t tap him with shots the way Kovalev. That’s a strange game plan that Kovalev used last Saturday night. He failed to use his size and power to dominate the smaller Canelo. GGG and Derevyanchenko would be trying to knockout Canelo. Andrade is more of a pure boxer, and that would be an ugly fight between him and Canelo.

It’ll be interesting to see if Canelo does move back down to 160. If he does so, it means that he didn’t fancy his chances of beating IBF/WBC light heavyweight champion Artur Beterbiev. That’s a fight that a lot of boxing fans would like to see at 175 before Canelo moves back down to 168 or 160. But Beterbiev isn’t weak in the chin, old and showing signs of being passed his prime.

Merchant says Canelo would have problems with young 175-lb fighter

“He knocked out a tired guy. Good for him,” said Larry Merchant to Fighthub. “He’s not a real power puncher, but he knocked out an old, tired guy [Kovalev]. He stuck in there while he was losing a lot of rounds,” said Merchant about Canelo. “I think 168 is his best weight right now. And I think a live young light heavyweight would be a lot for him to deal with. I give him all the credit in the world, and against a guy that used to be a terrific fighter, he showed some drama.

If Canelo stayed at light heavyweight to face some of the young fighters in the division, he would have problems if his management didn’t carefully select his next opponent. Making a defense of the WBO light heavyweight belt would mean that Canelo would likely need to fight one of these guys:

“He started to dictate the pace, and started walking him down and started landing some good body shots,” said Joseph ‘Jo Jo’ Diaz to fighthub about Canelo knocking out Kovalev in the 11th. “He caught him with that dangerous hook, and saw that he was wobbling, and finished him with that right hand. I really respect Canelo, because as soon as he seen that he hurt him with the right, he followed up with that straight right hand that knocked him out.

“It was a good fight, and a good experience for Canelo. Damn, now he has plenty of options. He can still fight at this weight or he can go back down and fight. It’s all up to him. The ball is in his court. I thought Kovalev was winning, and I thought Canelo had won just two rounds, but he fought a smart fight. He was walking him down and breaking him down mentally and physically. Yeah, he fought him really well,” said Diaz.

Diaz Jr. saw Kovalev dominating the fight until the 11th round, but the judges saw Canelo winning. Two of the judges had Canelo up 96-94, 96-94 after the 10th round.

Devin Haney challenges Gervonta Davis to face him next after Saturday »