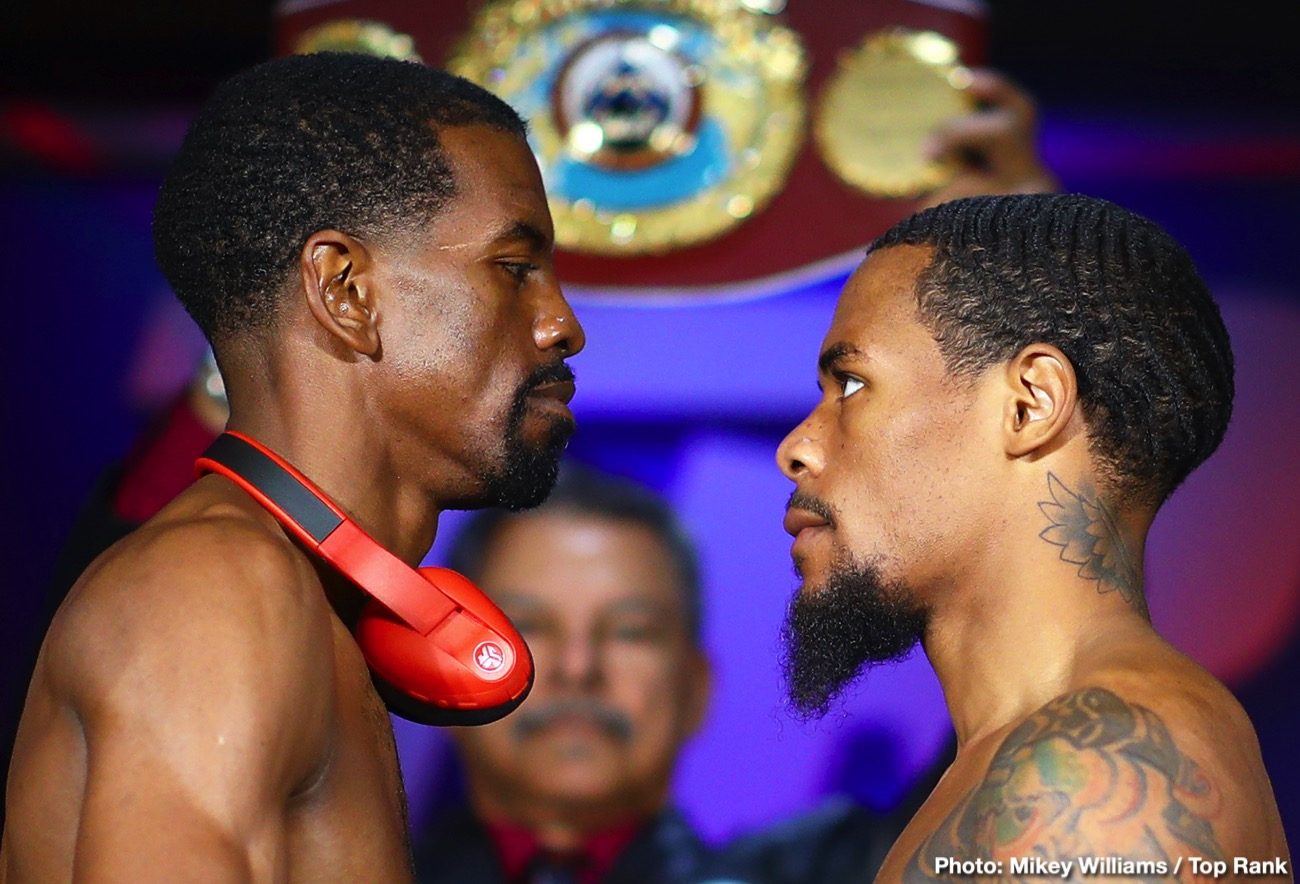 Under the bright lights, above where a pitcher’s mound normally stands, Jamel “Semper Fi” Herring will enter the ring for the first time as a champion.

Herring, who makes the first defense of his WBO junior lightweight world title against Lamont Roach Jr. Saturday evening (10 p.m. ET, ESPN+) at Chukchansi Park (home of the Triple-A Fresno Grizzlies), is a U.S. Marine Corps veteran who served two tours of duty in Iraq. He won the world title on Memorial Day Weekend earlier this year and, in fitting fashion, will defend his belt on Veterans Day Weekend and the eve of the Marine Corps Birthday.

In the 10-round co-feature, IBF No. 1 heavyweight contender Kubrat Pulev (27-1, 14 KOs), seeking a 2020 world title shot, will face Detroit-based veteran Rydell Booker (26-2, 13 KOs). Pulev is angling for a shot at the winner of the Andy Ruiz Jr.-Anthony Joshua rematch, while the 38-year-old Booker is 4-1 since coming back to the ring following a 12-year prison sentence.

In other action, after the main event takes place, 19-year-old lightweight sensation Gabriel Flores Jr. (15-0, 6 KOs) will face Aelio Mesquita (19-4, 17 KOs) in an eight-rounder. Flores, from nearby Stockton, Calif., will have a rabid cheering section.

At Thursday’s final press conference, this is what the fighters had to say.

On sparring with the likes of Terence Crawford and Maurice Hooker

“Those guys, they really helped. {Super middleweight contender} Steven Nelson being a veteran helped as well. He motivated me and pushed me… camp has been great. It’s probably been one of the best camps that I’ve had.”

“It’s all about what happens in the ring. All that will go in vain if I don’t play my part and perform to the best of my abilities and handle my business. It’s definitely great to be a Marine and basically be one of the only Marines on this type of platform. Of course, that’s a great feeling.”

“It’s truly a blessing fighting on Veterans Day weekend just to honor my cousin, who was my late trainer. He was in the Army and dedicated his life to boxing. He was an All-Army champ in, I think, 1983, one of those years. Way before I was born. But he learned the game from them, and he gave the game to me. That old Army training is definitely in me. This weekend is a big weekend for all vets, but at the end of the day, it all boils down to one thing to me, and that’s inside the ring. It’s for that belt right there. Julie {Goldsticker, Herring’s publicist}, hold that belt up for me. It’s gonna go home with me, and I am going to go celebrate with the Washington Nationals and the Mystics, who won the WNBA championship.”

“I’m glad that my promotional company moved me the right way. I earned this spot. I wasn’t given this spot. All the hard work that I put in from 9 years old to now is going to show.”

“We know Jamel is a crafty fighter, but we’re gonna bring it to him. I think I can do anything in the ring better than him. And I can be a better, taller fighter than him even though I’m shorter than him. I can beat him on the inside, I can beat him all around the ring. So, we’re going to see.”

“This is boxing. Nothing is sure, but I am here to fight, and I am here to win. That is why I prepared well, and I believe in myself. I know who I am. I’m one of the best in the heavyweight division. And, yeah, my opponent is good also, but I think I’m much, much better.”

“For me, this is one fight and more experience. I must stay in the ring and wait to fight the winner of Joshua and Ruiz. Who wins, it doesn’t matter to me. I’m now concentrated on Booker. He’s a serious opponent.”

“This {opportunity} means a lot. Everyone understands my story. I went away to prison for 12 years. In two years home, I’ve been very active. This fight couldn’t have come at a better time because I was just in camp with {Oleksandr} Usyk when I got the call. I left Usyk’s camp and went to Deontay Wilder’s camp, and so I stayed busy. And I get a lot of calls to go help the greats. I was just in camp with Anthony Joshua, learning something from him and vice versa. So I’ve been around the game 31 years, and I come to bring my experience and talents.”

“I don’t take nothing away from nobody’s talent because everybody has their own talent in certain ways. He hasn’t fought a heavyweight like me, slick as me. I understand he lost to {Wladimir} Klitschko. Klitschko was taught by a great who taught me and my coach, Emanuel Steward. They still don’t have the athleticism that I have. I’ll let my talents speak for itself.”

“This means a lot to me. I’ve fought in Fresno a few times already, and every time I come to Fresno, they treat me real well. It’s like a second home to me. I enjoy it here, and I feel the love. To fight on Veterans Day {Weekend} means a lot because I get to pay some respect to veterans. That’s something I always wanted to do, and to go to the veterans hospital {VA Central California} and talk to them and shake their hands, it was nice… just to hear their stories. I met a man who was a 100 years old, so it was nice to interact with them.”

“Each fight, I get better and better. I fix my mistakes. Every fight, there are mistakes. It’s hard to be perfect. Not everyone sees {my mistakes}. Maybe my father and I do, so come Saturday night, you’re going to see another step up from Gabriel Flores. To beat him, I just have to be myself. He’s got a nice right hand, but it takes more than a right hand to beat me.”

Promoted by Top Rank, in association with Golden Boy, tickets are priced at $200, $96, $46 and $29 (not including applicable fees). Tickets can be purchased by visiting mpv.tickets.com, charge by phone at 559.320.TIXS (8497) or at the Chukchansi Park box office (open Monday-Friday from 9 a.m PT to 5 p.m. PT). In honor of Veterans Day and the Marine Corps Birthday, any active or retired service members will receive up to four free tickets to the event by presenting their military ID at the Chukchansi Park box office (while supplies last).