Golovkin to fight in early 2020, then possibly Canelo in May 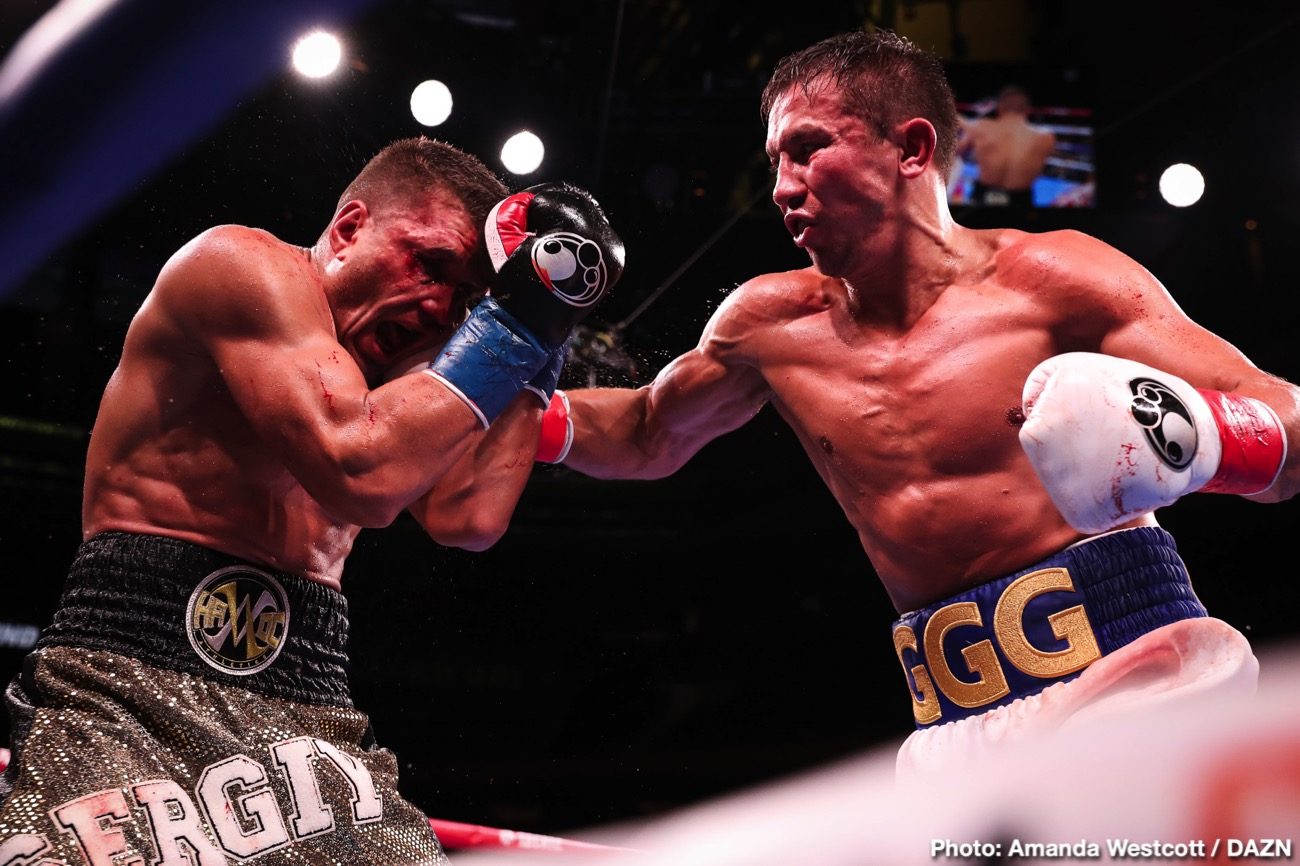 By Sean Jones: Gennadiy ‘GGG’ Golovkin will be defending his IBF middleweight title against his mandatory Kamil Szeremeta (21-0, 5 KOs) in January or February, and then he’ll potentially be taking on Saul Canelo Alvarez in May, says Matchroom promoter Eddie Hearn.

The Szeremeta fight is a sure thing for GGG, but not the trilogy match with Canelo. Hearn says Golovkin’s title defense against Poland’s Szeremeta will be taking place in Chicago. That’s where Szeremeta has a lot of his Polish boxing fans. They should be able to pack the arena for the fight.

Golovkin will be a grueling fight for Canelo

That’ll be up to the Mexican star whether he wants to take what would likely be another grueling fight. Canelo wouldn’t be able to count on GGG folding the way former WBO light heavyweight champion Sergey Kovalev did in their recent match on November 2.

The boxing public is still shaking their heads over that match, as it looked strange to many of them. A lot of them think Kovalev, 36, took it easy on Canelo for some unknown reason. Canelo keeps saying that Golovkin is “no challenge” for him, and that’ll beat him easily.

The 37-year-old Golovkin had a tougher time than expected in recapturing his old International Boxing Federation middleweight title in beating Sergiy Derevyanchenko by a 12 round unanimous decision on October 5 in New York. That fight was close enough for it to deserve a rematch. Canelo says he had Derevyanchenko as the winner of that fight. He had Golovkin hurt in round 5, and he troubled him in every round with his body shots and pressure.

“A lot depends on Canelo’s thoughts, if he’s ready to take that fight in May,” said Hearn to ESPN.com.

So in other words, Hearn is saying what everyone already knows about Canelo. He’s been saying for months now that he’s NOT interested in fighting GGG, but he MIGHT do it if the fight makes “business sense.” The question is will DAZN sweeten the deal for Canelo to fight Golovkin a third time. Canelo already getting a $365 million for his 11-fight deal.

Canelo needs Golovkin to bring in the subscribers to DAZN

Since signing that contract, Canelo has fought Daniel Jacobs and Sergey Kovalev. His fight against Rocky Fielding supposedly wasn’t part of the DAZN contract, which is a good thing because that was a pure slaughter. Canelo’s two fights against Kovaelv and Daniel Jacobs failed to bring in the massive numbers that his bouts against Golovkin brought in.

Golovkin has own contract with DAZN, and he’s had two fights so far against Steve Rolls and Derevyanchenko. Szeremeta is arguably on the same level as 35-year-old Rolls in terms of talent. So unless Golovkin has suddenly gotten old overnight, he should be able to take care of Szeremeta without too many problems. If Golovkin takes punishment like he did against Szeremeta, then he could get marked up or cut. That would mess up Golovkin’s chances of fighting a trilogy match against Canelo next May on Cinco de Mayo holiday weekend on DAZN.

Canelo has pressure on him to fight Golovkin a third time. DAZN is paying Canelo all that money, and they want that match to take place. Canelo put the fight off indefinitely by exhausting the remaining nine fights of his DAZN contract by fighting Kovalev-eque level fighters. If Canelo refuses to fight Golovkin again, then he’s going to have to fight these types of fighters: