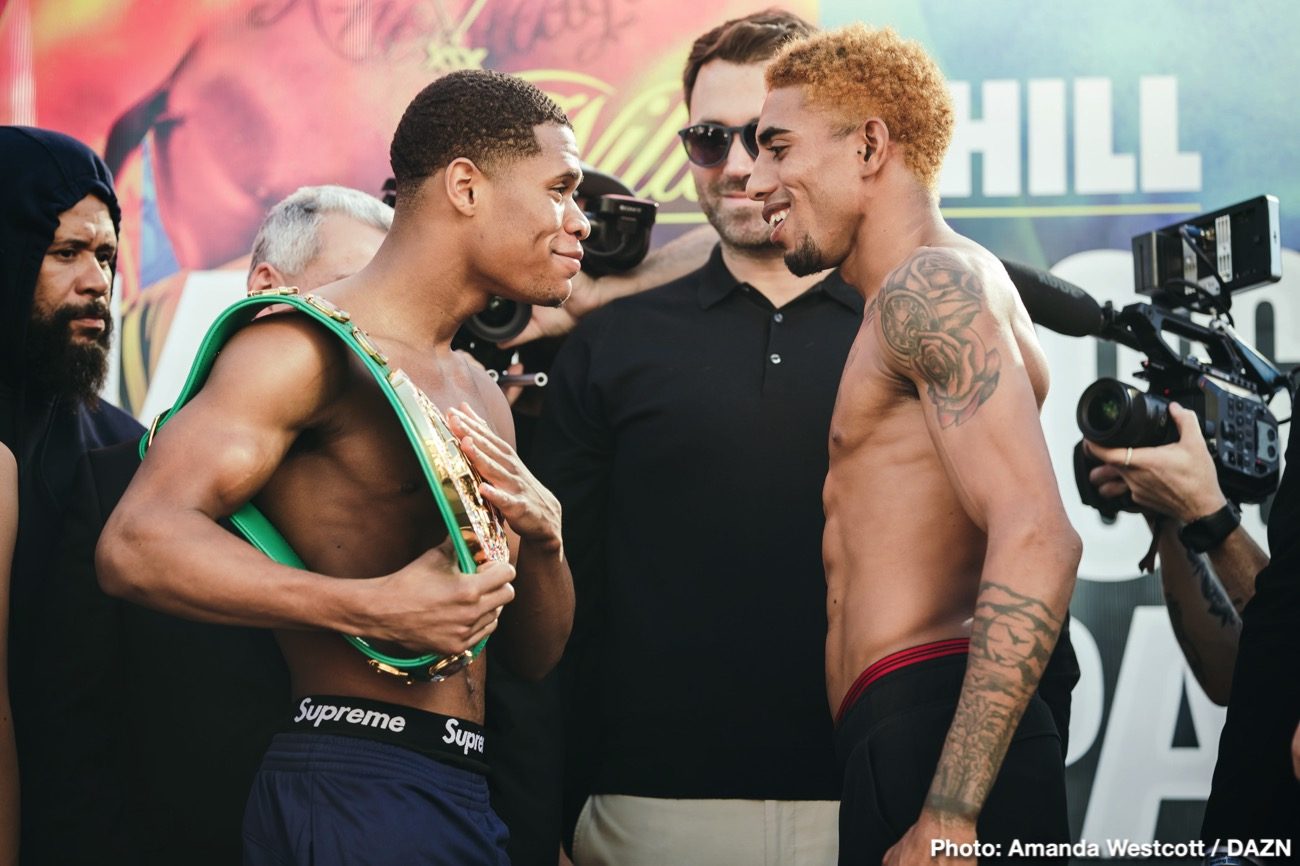 Haney & Saunders will fight at STAPLES Center in Los Angeles on Saturday November 9, live on DAZN in the US, Sky Sports in the UK and distributed globally on FITE – All of the fighters from Saturday’s stacked card hit the scales on Friday afternoon. Highlighting the main card, which kicks off at 9 p.m. ET, is newly crowned lightweight world champion Devin Haney making his first title defense and super middleweight champion Billy Joe Saunders making his United States debut. The undercard begins at 7 p.m. ET and features rising prospects Diego Pacheco, Nikita Ababiy and Reshat Mati.

Quotes from the press conference:

“In this fight I’m going in with chip on my shoulder. The boxing fans aren’t acknowledging me as the WBC champion. Come Saturday night I will show them. I will put on a great performance. He will see everything Haney is made of, and if he can’t it will be an nearly night. I will show the world I’m one of the best fighters in the world.”

“Fresh off a fantastic weekend for the DAZN business and our partners at Golden Boy with Canelo’s spectacular knockout in Las Vegas. It’s great to get back into a massive fight week, a unique fight week. Every fighter on this stage has an unique opportunity this week to introduce them to what we firmly believe will be a massive audience on both sides of the pond and globally. The numbers we’re seeing are phenomenal: the social numbers and the subscription buys as well. A huge opportunity for this roster of fighters to introduce the next generation of sports fans, and the next generation of we what we hope will be boxing fans.

“In particular, thank you to Devin Haney and Billy Joe. You’re standout fighters in your own right, and we appreciate you having the same vision we have in the plan to continue growing the sport of boxing and the significance this card has in that plan.”

“This is a great turn out ahead of a crazy night on Saturday night. It’s been a joy working with KSI and Logan Paul on this fight, it has completely blown my mind. The numbers we’re seeing for pre-subscriptions are just crazy. We have enjoyed it and we will embrace it. I think every fight on this card is a main event. Two world championship fights on this card, and two of the very best pound-for-pound fighters already in the world of boxing.

“We know there’s a whole new audience coming to this sport on Saturday night. The aim for us is to make sure the audience will get to see greatness and fall in love with what we fell in love with in boxing. When you watch Billy Joe Saunders and Devin Haney you must become instant fans. Our plan is to bring a new global audience and make sure they stick around, and stay in the sport to follow these fighters.”

Devin Haney will face Alfredo Santiago in the first defense of his WBC World Lightweight title at STAPLES Center in Los Angeles on Saturday November 9, live on DAZN in the US, Sky Sports in the UK and distributed globally on FITE.

Haney (23-0 15 KOs) was elevated to full champion at the recent WBC Convention in Cancun, Mexico, following his dominant performance against Zaur Abdullaev in New York in September where he overpowered the unbeaten Russian over four blistering rounds to force Abdullaev to retire, and land ‘The Dream’ the interim belt at 135lbs.

Now Haney makes the short trip from his Las Vegas home to Los Angeles where he faces Santiago (12-0 4 KOs) in his maiden defence. The unbeaten Dominican talent, who turns 25 the day after the fight, will be on looking to derail Haney’s reign as champion at the first hurdle.

“I’m happy we got this deal done,” said Haney. “And I’m not just a WBC World Champion that’s holding somebody else’s belt. I’m the sole champion, and I will defend the Lightweight World title on November 9. I’ve been working hard and I’m extremely focused. This will be the perfect gift to myself for my 21st birthday.

“All the fans at STAPLES Center and the millions watching on DAZN, are going to witness another dominant performance. I’m going to continue to show the world that I’m the best in my division.

“Alfredo Santiago is my next opponent; he’s undefeated, he’s hungry, and he’s coming to win. I take every fight very serious and this fight is no different. Tune in next Saturday and you’ll see that the hype is real.”

“First and foremost, I would like to thank Matchroom Boxing and Fresh Productions for this opportunity,” said Santiago. “This is the moment that I’ve been dreaming of since I was a kid, and the one I’ve been waiting for since I became a boxer. I am physically and mentally ready, and I am going to show who the best 135lber in the world is.

“Mr. Haney is a formidable fighter who chose the wrong opponent. He cannot beat me. I belong to ‘The Terror Squadron’, the best boxing team in the world. This is my time.”

“I am delighted to see Devin defend his World title on November 9,” said promoter Eddie Hearn. “We’re going to have a huge crowd of new fight fans at the arena and tuning in all around the world to watch KSI and Logan Paul, and Devin is the perfect fighter to showcase what boxing is all about to a potential crop of new fight fans – he’s young, exciting, confident and relatable – the perfect mix.

“Alfredo Santiago is a hungry young fighter himself and this is a golden opportunity for him to halt Devin’s charge to superstardom – but I believe that ‘The Dream’ will shine and begin his reign as World champion in style.”

Haney’s clash with Santiago is part of a huge night of action in Los Angeles as YouTube sensations KSI and Logan Paul clash in a rematch of their controversial draw – this time as professional fighters.

Tickets are on sale NOW from AXS.com