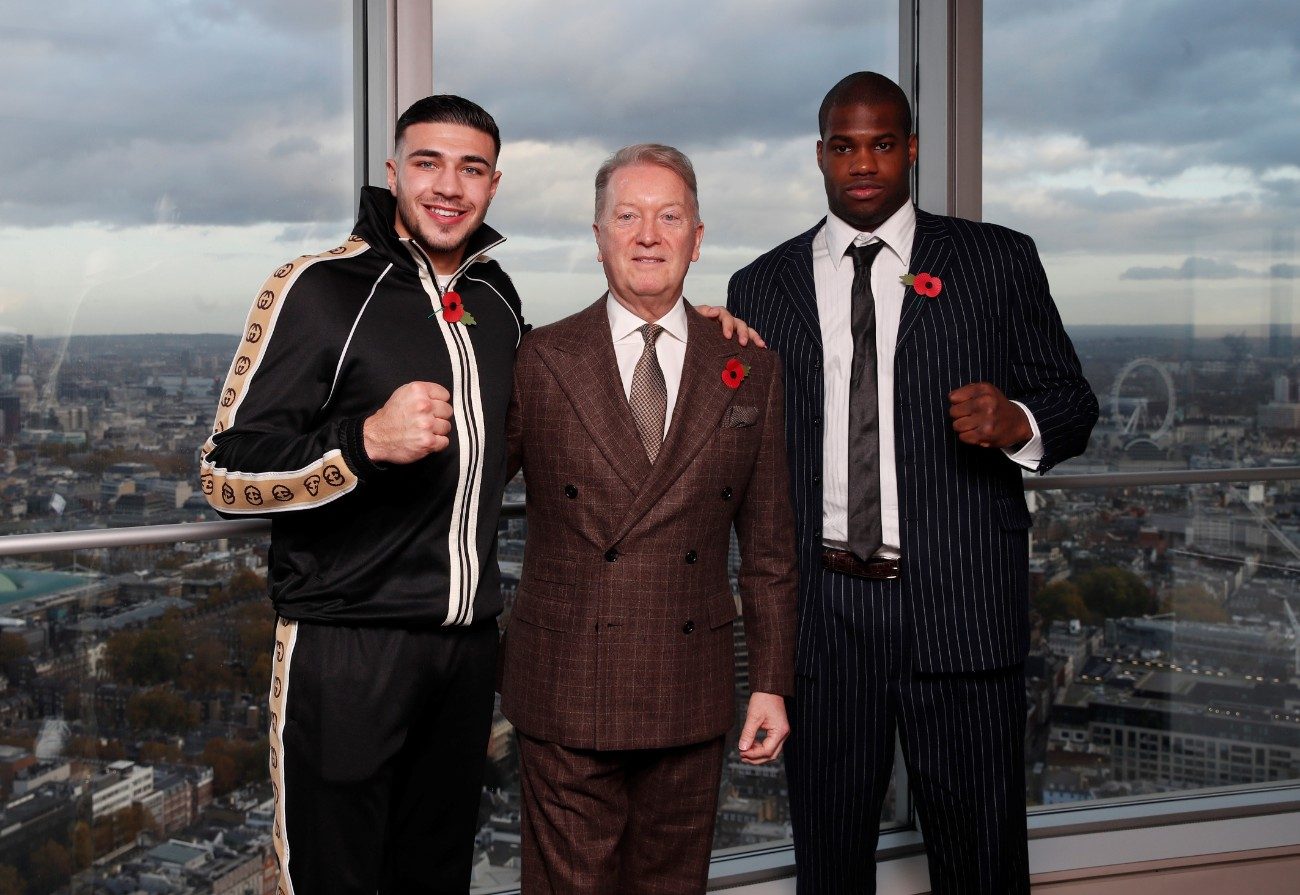 Unbeaten light-heavyweight hopeful Tommy Fury (2-0, 1 KO) returns after his successful stint on Love Island where he finished runner-up with his girlfriend Molly-Mae Hague.

Details of further brilliant fights will be announced in the coming days.

Photos of today’s press conference are available on this link with credit to Reuters/Action Images.

Here are a selection of quotes from today’s press conference at BT Tower in London’s West End.

“Fujimoto is ranked 12 by the WBA, has a good record and this is a fight that will get Daniel a lot of exposure as we strive to make him a global brand.

“We are working on making Daniel a number one contender with a governing body. I will get him there.

“I loved what I saw of Daniel as a senior amateur, but what he has done as a professional has been punch perfect. At this stage of his career he is the best young heavyweight I have seen in British boxing.

“He is in love with boxing. His mission is to become unified world champion and he will do it. I could make a world title fight tomorrow and he would win, but he needs that little bit more experience. When he wins a world title it is about making sure he keeps it.

“This time next year he is going to do the business (in a world title). And next year there could also be a collision with Joe Joyce.

“Tommy will go much further than KSI as a boxer. He has a great future. There is a lot of pressure through Love Island, but he is confident and mature enough to deal with that. He has a career and it’s my job to deliver and guide him so he can achieve his dreams. If he keeps his side of the bargain and trains we can go on.

I am delighted he is back. He came into the sport as the brother of Tyson and now he is his own man. It will be a cracking card and a Christmas present for the fans.”

“I am very happy. My career has been perfect so far and I have progressed in and out of the ring. I am with Frank Warren who is one of the best promoters ever and there is my Dad, Martin and Tony Bowers. We are going all the way. My trainer Martin has organised so much and puts in so much hard work. I am going to make sure I become a success.

“It is coming together and in each camp I have improved. If I can get to a world title challenge soon I am more than ready. Timing is everything. I will continue winning in style and I will get there soon. It is a hell of a challenge against Fujimoto, but I will be ready and take him out in devastating fashion.

“The boxing audience is taking notice and that is down to the hard work we put in. I’m ready for the next step. I love the recognition. It is what I have been after since I was five-years-old. My feet are on the ground. I just stick to what I am good at and remain humble.

“And I have been a student of this sport since I was young. I am obsessed by it all. The sport is filled with great fighters and I want to be a legend when I have finished.

“Fear is an asset for me. It’s a weapon and I use it in every fight.”

“It is good to be back after Love Island and life is good. I feel at home when I’m in the squared circle. Fame is one thing, but it is how you cope with it. You can let it go to your head and run around thinking you’re too good for everybody. But, you are the same as everybody. It’s just that a few more people want to take your picture or get a signature. I am still the same man as I was before Love Island – the same lad who was boxing on the Josh Warrington-Carl Frampton undercard.

“There are a lot of avenues that I could have taken since I did Love Island, but you have to ask if these things are making you happy. TV is great, but I am happiest when I am fighting. It is in my blood. I am a fighting man and here to prove it.

“And I have been training my heart out for a few weeks, because after the last few months I’ve had to. And I know what it takes and I am doing it every day in the gym.

“I watched the YouTubers fight at the weekend and I admire them both because it takes a man to get in the ring. And I heard KSI wants to fight again and I am here if he wants to fight me. They had no boxing experience, trained their balls off for ten weeks, got in the ring and had a fight so I have nothing but respect.

“Just 12 months ago, I had 3000 followers and only known in my local kebab shop. Now I’m pushing on for three million followers. I’m still the little boy who grew up in Salford. I don’t think I am too good for anybody.

“And I am here to do the best I can. I want to bring a new audience to boxing as a lot of those there on December 21 will not have been to a boxing show before.

“Molly loves me boxing and watches it on YouTube. She is throwing combinations in the mirror every day. I have the right people around me and I just have to do the work in the gym.

“I think my brother Tyson will be there. To have the best heavyweight in the world sitting ringside makes you want to dig deep. Tyson is a worldwide superstar doing boxing, MMA and wrestling. Why not? Nothing is guaranteed in life. I would wrestle in a heartbeat. And I have wanted to do that all along.

“I take every day as it comes, but I wouldn’t be in boxing if I couldn’t reach the top. If I didn’t believe I could be a world champion I wouldn’t do it. One day I will be holding all the belts.

Frank Warren’s Queensberry Promotions are heading to the Copper Box Arena to stage a bumper night of boxing on December 21st.

Light Heavyweight prospect and Love Island star Tommy Fury (2-0) makes his long awaited return to the boxing ring after winning the hearts of the nation on the popular ITV reality television show over the summer.

Tickets from £40 are now on sale via Seetickets and will be available via Ticketmaster on Wednesday.