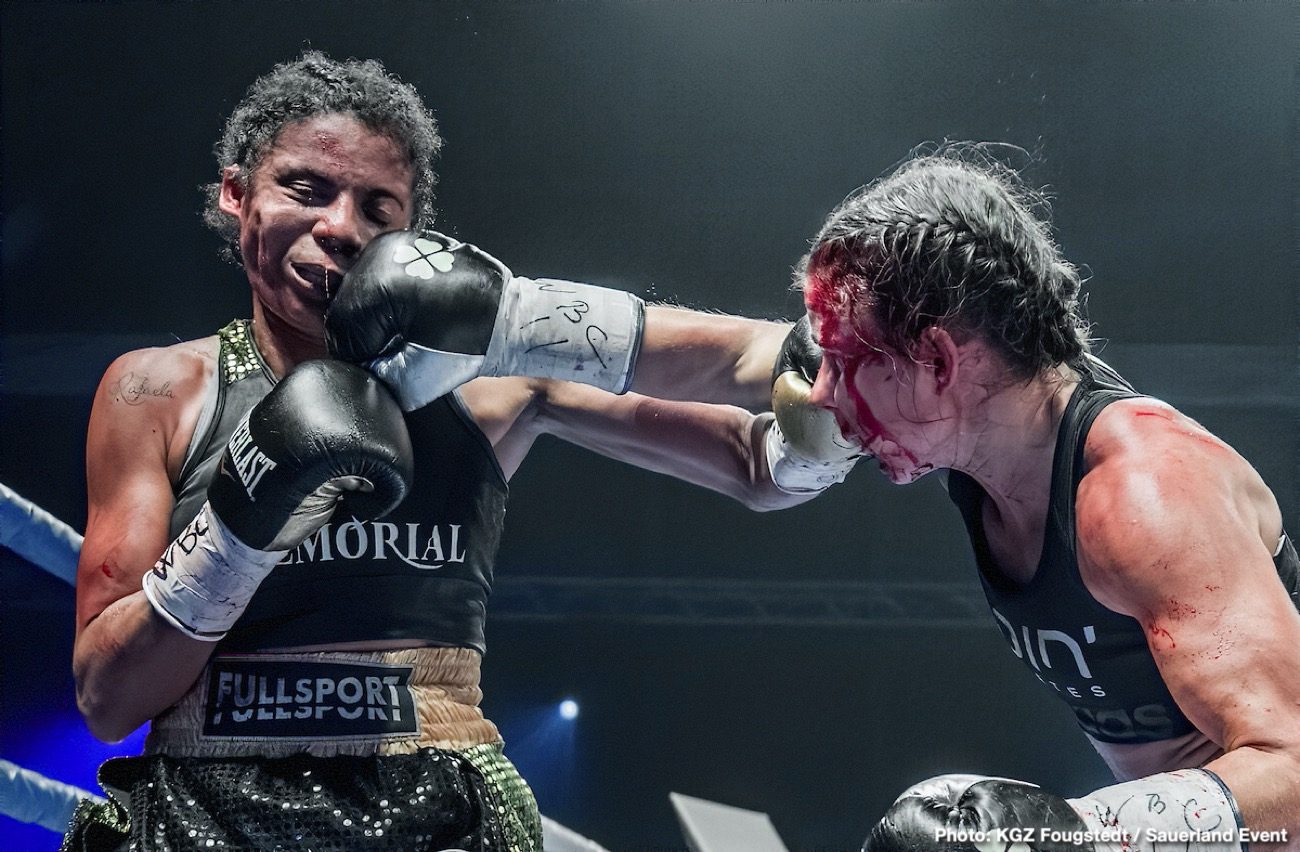 In a fast paced and exciting affair, Thanderz had to withstand some early pressure from the Brazilian Ramos, who started strongly, but was able to find her rhythm and land the more decisive shots as the fight progressed

In a dramatic final round, blood poured down Thanderz’s face following a clash of heads, which saw Ramos deducted a point by the referee, and after the final bell she was awarded a deserved split decision win (97-93, 96-93 and 93-95).

“I am very happy to get the victory,” said Thanderz. “It was a war from the start to the finish. I couldn’t really see anything in the last round but I knew I had to give it my all. To win a World title feels completely indescribable!”

“Norway has a new World Champion and a new boxing superstar,” said promoter Nisse Sauerland. “Katharina took her chance and won her first World title, but it doesn’t stop here. There are a lot of big fights coming for her!”

Kai Robin Havnaa (16-0, 13 KOs), the son of former WBO World Champion Magne Havnaa, had to overcome a tough test to retain his undefeated record with a win over Mariano Angel Gudino (13-4, 8 KOs). The Argentinian threw everything at Havnaa, but was unable to derail the fast rising Norwegian star, who won via split decision in a valuable learning fight.

“It’s been a hell of a week after the last minute change of opponent,” said Havnaa, who was originally scheduled to face American Al Sands. “But that’s not an excuse because these things can happen in boxing. I learned a lot from this fight. Gudino was a tough opponent and it feels great to get the win!”

“Kai wanted a real test, and he got it,” said Sauerland. “Not many fighters would have accepted such a hard fight on short notice. He showed a lot of heart and courage in there tonight. I don’t believe it was his best performance but he got the win and we move forward. There is still a lot more to come from Kai.”

MCGREGOR IS KING OF SCOTLAND

Lee McGregor became the unified British and Commonwealth bantamweight champion after an incredible battle with Kash Farooq at #MTKFightNight.

The sensational action was live on ESPN+ in the US in association with Top Rank and on iFL TV worldwide, and saw the two men go toe to toe for 12 rounds of solid action.

After an extremely hard-fought battle had the sold out crowd at the Emirates Arena in Glasgow on their feet, with McGregor (8-0, 6 KOs) securing the split decision win to hand Farooq (13-1, 6 KOs) the first defeat of his career.

Irish prospects Paddy Donovan (2-0, 1 KO) and Pierce O’Leary (2-0) each made it two wins in a month after impressive showings, and Mark McKeown (1-0) made a successful start to his professional career with a convincing victory.

McGregor said: “I was willing to do anything in there. I’ve had the hardest week of my life and I still got in there and fought my heart out. I love having fights like that and I am over the moon.

“I knew it was a close fight so hats off to Kash Farooq. There was no bad blood in the build up and it was total respect.”

Smith said: “It was the most frustrating fight ever, but I’m still undefeated and just beat a 16-0 undefeated opponent.

“Everyone has off nights. Winning on an off night isn’t too bad, so I’ll rest now and come back a lot better in 2020.”

Philbin said: “I’m glad to be back in the ring because it seems like a long time. It was tough and I was struggling a bit to get my range, but I’m pleased with the win.

“I need to get my foot on the gas and get active now and I would love a fight for the British super-middleweight title in the future.”

O’Leary said: “I think I have some Scottish fans on my side after this fight. I was really happy to get the rounds in and I knew what to expect in there.

“I kept my composure and I’m happy. Hopefully I can get back out in December and then it will be three fights in three months which is great.”

McKeown said: “I was really pleased to get the win in my debut. It’s just great to be back boxing again and I need to thank all of my fans that came to watch.

“It was fantastic to be part of such a huge night and hopefully the plan now is to try and stay as active as possible and get out again as quick as we can.”

Donovan said: “I enjoyed every round. It was a tough opponent and he had never been down or stopped, so I proved I have the power by putting him down.

“I got it confirmed that I’m fighting at Madison Square Garden on St Patrick’s Day and that is every fighter’s dream, so I can’t wait.”

Paddy ‘The Real Deal’ Donovan put on a masterclass performance to win all six rounds of his welterweight encounter with the tough and durable Nicaraguan fighter, Danny Mendoza at the Emirates Arena, Glasgow, Scotland.

The 20 year old Irish star opened round 1 patiently with his rangy jab before offloading menacing body shots and stiff uppercuts forcing his opponent to cover up and retreat.

Shortly into the second round Donovan caught Mendoza with a sharp left hand causing his opponent to take a standing count from the referee. The Irishman continued the round picking his punches consistently and looking sharp.

Donovan through rounds 3 and 4 kept his composure showcasing his boxing skills and clever footwork to control the pace of the fight and in spots showing moments of brilliance.

In round 5, the Top Rank Irish fighter was offensive scoring solid combinations and also using his ring craft to outwit Mendoza. In round 6, Donovan launched a series of controlled attacks with accuracy going to the body and head of Mendoza.

At ringside Donovan commented ‘I enjoyed the fight, I rarely got hit. My opponent was tough and took some good punches from me. It was good to get 6 rounds of boxing under my belt. I was very happy with performance.’

Andy Lee former World WBO Middleweight Champion, Donovan’s trainer was well please with his young fighter’s performance ‘Paddy boxed really well, he was patient and measured in there. It is all experience and this will stand by him as we go forward.’

St Patrick’s Day in March 2020 at Madison Square Garden, New York on the undercard of Irish Featherweight Kingpin Michael Conlan has been pencilled in as Paddy Donovan next outing.

Rocky Fielding returns to the ring in style

Rocky Fielding returned to the ring in style after nearly one year out as he needed less than two rounds to stop Abdallah Paziwapazi on a packed #MTKFightNight at the Eventim Olympia in Liverpool.

Former world champion Fielding (28-2, 16 KOs) was dominant from start to finish, as he earned the knockout win over Paziwapazi (26-7-1, 23 KOs) in front of a passionate crowd, live in the US on ESPN+ in association with Top Rank, and also live on IFL TV.

Fielding said: “It was a good win. I knew he would come at me swinging to try his luck, but the shot me and Jamie Moore had been practising in the gym worked.

“I got caught with a few shots but that woke me up, and after 11 months out of the ring it felt good taking a few, but it also felt better getting him out of there. It felt like home in there and it was great to be back.”

Flanagan said: “It was a cool, calm and controlled performance. I nearly had him out of there in the fourth round, and then he got a bit messy after that and started to go in the with the head.

“I’ve had three fights this year now in a short space of time and got three wins, and now hopefully we can get the big fights next year now.”

Murray said: “It was a straightforward win. I went out there and enjoyed myself and didn’t get caught with any shots. He had a go every now and then but in the main he just tried to survive.

“I could have probably got him out of there but I think I caught him too early and then he was going into his shell and I couldn’t find the opening. I’m pleased and now I’ll have a good Christmas with the family.”

Hyland said: “I got the win under the belt and I was happy with the performance. I’ve been out of the ring for a year so it’s good to get the ring rust off and I want to stay active now and keep the fitness up.

“There was a big crowd in there and I’m made up with the support who came down to watch me. It felt different from my amateur fights and I’ve been working a lot on my strength and power in the gym and you can feel that in the fight.”

Jonas said: “It’s always good to get a stoppage. I thought the referee was going to stop it when we were in the first round, but I had to wait until the second.

“It’s becoming a good hunting ground for me here. In 2020 I want more rounds and more fights, so hopefully I can stay active.”

Quigley said: “The plan was to always have three fights before the year was out. I probably shouldn’t have fought as I pulled a muscle in my back a few weeks ago and couldn’t train, but we’ve stuck to the plan.

“It was good to get the win. The next fight is going to be a big one, so I’ll get back down to my proper weight and then get myself right back in the mix.”

Turner said: “It was great to be out there. It’s been years in the making to get back out there so it’s been tough, and I’m happy to be back and get the win.

“It was amazing to be on a card like this with some big names. I’ve had some really good sparring for this fight, and it was good to let my hands go.”