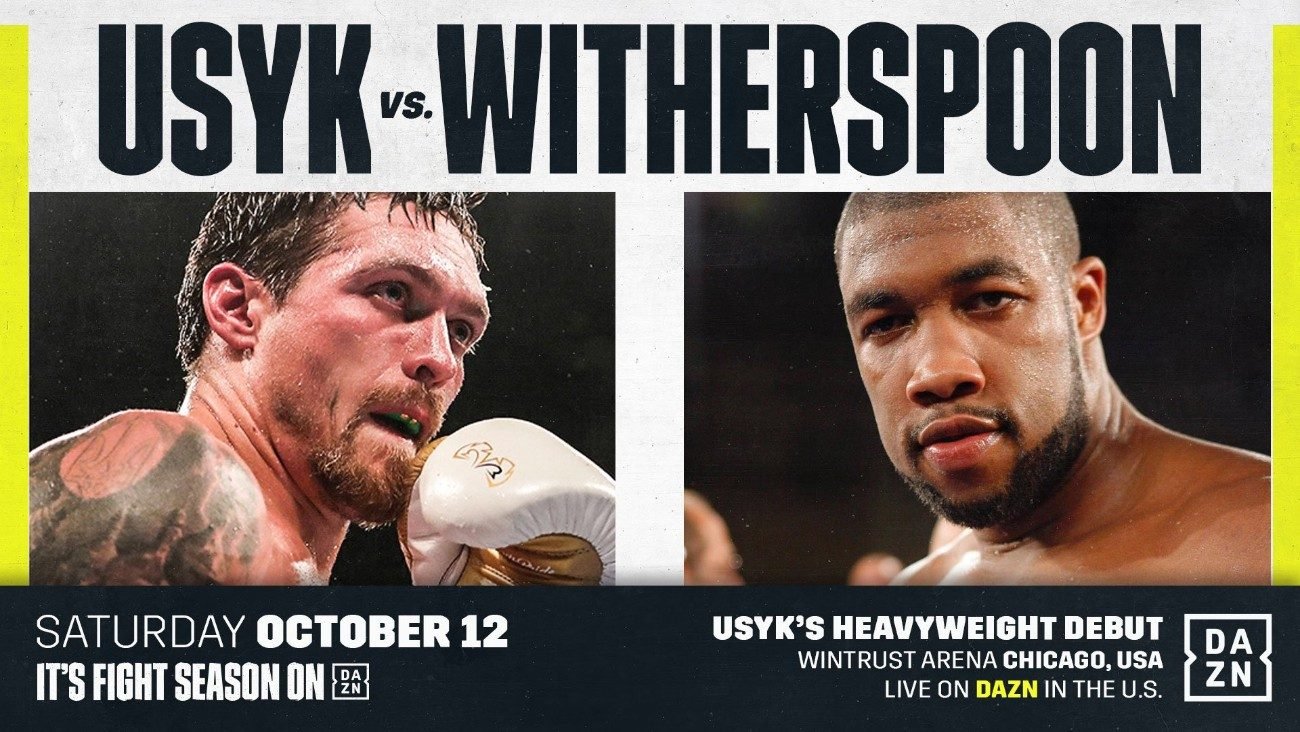 By Charles Brun: Oleksandr Usyk will be taking on a name from the far distant past in 38-year-old veteran Chazz Witherspoon this Saturday night on October 12 in his heavyweight debut on DAZN. To put a positive spin on an older fighter like Witherspoon (38-3, 29 KOs) being brought in, it’s a chance of a lifetime for him.

Usyk getting his first fight under his belt at heavyweight

At least with Witherspoon, he’s been a boxer his entire career, and he’s not someone that comes from a different sport. The whole idea behind Usyk’s heavyweight debut is to get one fight under his belt at heavyweight before the WBO orders the winner of the Anthony Joshua vs. Andy Ruiz Jr. rematch to defend against him. Usyk is the WBO mandatory at heavyweight.

The WBO gave Usyk the mandatory position at heavyweight without him needing to work his way to that spot the old fashioned way by beating contenders. Usyk doesn’t have to do that. He’s already the WBO mandatory, and he’s got a soft opponent for his debut in the weight class this Saturday.

Witherspoon’s career evaporated over a decade ago when he was beaten by Chris Arreola in 2008. If Witherspoon can resurrect his career 11 years later with a victory over 2012 Olympic gold medalist Usyk, it would be a tremendous accomplishment.

There were rumors that Usyk would be facing Alexander Ustinov, but Matchroom Boxing promoter Eddie Hearn quickly shot them down. He didn’t say whether he had attempted to get the 42-year-old Ustinov or now.

The 6’7″ Ustinov might have been a better option for Usyk than Witherspoon, who has fought only 2 times in the last three years.

Witherspoon is taking the place of Tyrone Spong, who was removed from the card after adverse findings from his urine test sample.

Usyk vs. Witherspoon will be shown on DAZN and Sky Sports from the Wintrust Arena Chicago, Illinois. There’s not a lot of excitement about Usyk’s fight this Saturday. Obviously, it doesn’t help when your original opponent Spong is an unknown. It further hurts when the guy tests positive for a banned substance.

It’s unclear whether Hearn ever made any effort at all to find Usyk a good heavyweight for him to cut his teeth on for October 12. With Usyk already the WBO mandatory at heavyweight, it’s unlikely that Hearn ever had any intention of matching him tough. The reason for that is obvious.

With the money that Usyk will bring in for a fight against the Joshua vs. Ruiz rematch winner, it was in Hearn’s best interest to match him against a weak opponent in a gimme fight. Even if Usyk gets crushed against the Joshua-Ruiz winner, the fight will still bring in a lot of money. Hearn needs opponents for Joshua, and Usyk, if nothing else, will be an opponent that the hardcore boxing fans will get excited about.

“I knew you were going to ask me a question on the first one, and I don’t even want to talk about it because it’s very dirty stuff,” said Usyk to IFL TV about his thoughts on his previously scheduled opponent Tyrone Spong testing positive for a banned substance. “We don’t even really need to talk about that.”

Deontay Wilder is the champion Usyk is targeting

Usyk is wasting his time talking about a fight against WBC heavyweight champion Deontay Wilder. He has no way of forcing a fight against him. Usyk is the WBO mandatory, not the WBC mandatory.