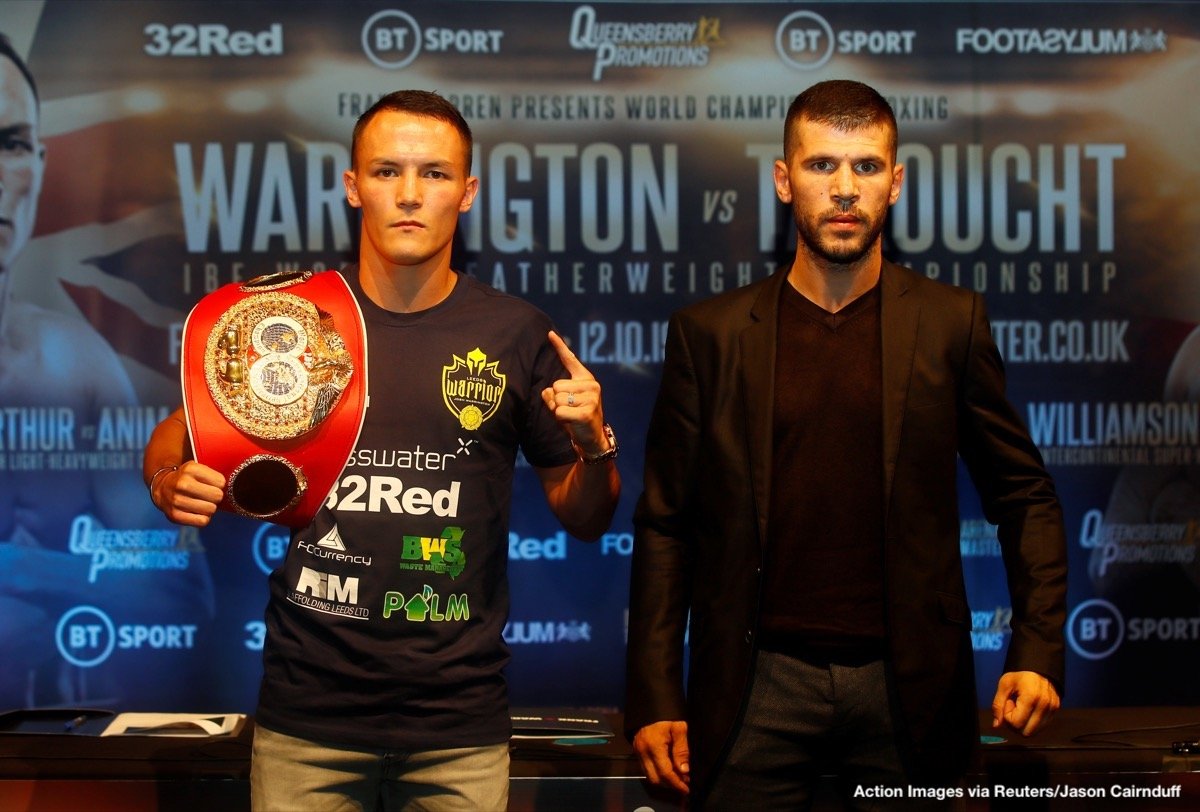 Here are a selection of quotes

“Hopefully there is no banana skin and if Josh comes through we can get to Elland Road again.”

“He is the best featherweight on the planet and can go on to become one of the best fighters of his generation.”

“If people say he isn’t the best why don’t Leo Santa Cruz and Oscar Valdez want to fight him?”

“Josh is something special and we will make big fights happen, but he has to get past Takoucht.”

“Zelfa against Jordan, this is a good fight. They are both skilful fighters, competitors and I’m sure we will see something special on Saturday night. Zelfa is my fighter, but I love having Jordan on our shows. I’ve never seen a guy give so much as he does.”

“If Lyndon can come through there is a lot happening among the British light-heavyweights and he will be in the shake up.”

“We took our eyes off a few things before the last fight against Kid Galahad. We were so concentrated on unification fights and just beating him up. I think we took our eye off the ball in a few areas of training.”

“This time, I have not looked beyond Takoucht. There is talk about unifications or going back to Elland Road, but the focus is this fight and this fight only.”

“I want an A class performance after the cuddling contest against Galahad. Sofiane can go home a hero by beating me and I can’t let that happen. World champions can get complacent, but we are on a mission.

“My mentality isn’t that this is an instant win. Winning is the most important thing but I want to send a message and win in style.”

“We have left no stone unturned and we have to come back with a statement.

Other world champions have turned down the fight against Josh, but Sofiane took it without hesitation and he will come and try to rip the title away. I believe that Josh is the best featherweight on the planet, but we have to win well.”

“I feel good, I have been training hard, I am in the best condition and will show up on the night. Josh is a very good champion, but I need to make an impact in order to win. Winning will change my life and reputation in the boxing world. I believe in myself. I am ready to fight.”

“Jordan is going to throw the kitchen sink at me and like Frank said he will give 150 per-cent.

We wanted this fight because Jordan will bring the best out of me. Jordan lost to Archie Sharp and Sam Bowen, but I am not them and the best in my weight division. My mindset is great and I am a different man to the boxer who lost to Ronnie Clark.

“If I want to get to world level these are the fighters I have to dismantle. I want the British champion Sam Bowen, but I am not overlooking Jordan.”

“I have put everything into this camp and I am going to get a win. I respect Zelfa, he is a good boxer and looked very good against Lyon Woodstock, but I can cause problems if I stick to the game plan.”

“He showed flaws in his defence when he lost to Ronnie Clark and that is a bit of blueprint. Credit to him he went back to the gym and improved. This could be my last chance so I have got to give it everything and show what I am about.”

“I don’t want a walkover, but there is no department where he is better than me. When I win this I am right behind these guys like Anthony Yarde and those fights can be made.

Right now, Anim is my sole thought. I am in the gym 24/7 perfecting my craft. There are lot of great Manchester fighters and I am just building my legacy.”

“This is a great opportunity and something I have been waiting for a long time. Lyndon is a average boxer and never fought anyone like me in his life. I am going to take his title. He says I have beat nobody, but I am going to show I am somebody.”

The big night of action in Leeds is headed by local hero Josh Warrington (29-0, 6KOs) who makes the third defence of his IBF featherweight championship against France’s Sofiane Takoucht (35-3-1, 13 KOs). Zelfa Barrett (22-1,13KOs) will make the first defence of his Commonwealth super-featherweight title against exciting Scot Jordan McCorry (18-6-1, 4KOs). In a third title clash Manchester’s Lyndon Arthur (15-0, 12KOs) faces Ghanaian Emmanuel Anim (14-2-1, 12KOs) for the vacant Commonwealth light-heavyweight crown , in a battle of the big hitters.

A few nods of the head, a smile and a handshake…