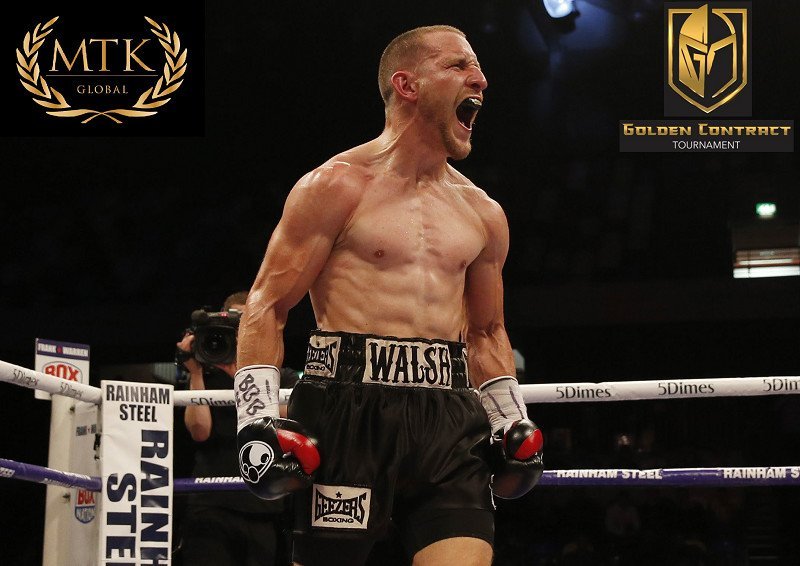 The super lightweight tournament quarterfinals will start Nov. 2, and the light heavyweight quarterfinals will be contested Dec. 14. The championship matches of all three tournaments will be staged during a special event scheduled for July 2020, and the winners are guaranteed a lucrative promotional contract with one of the biggest promoters in the world.

The quarterfinal matchups, which were determined via a random drawing following Tuesday’s media workout, are as follows: McCullagh vs. Araujo, Dickens vs. Ramos, Socarras vs. Walsh and Wood vs. Joyce.

The quarter-final draw for the exciting #GoldenContract featherweight tournament has taken place – with the eight fighters now knowing their opponents ahead of Friday’s groundbreaking event.

The draw was conducted on Tuesday, with each fighter picking a ball out of a bag. There were four red balls and four blue balls, with the fighters picking the blue balls able to select their opponent from the ones who selected a red ball.

Wood said: “I’ve picked Joyce because of style wise, and I’ve got a few other reasons that I’ll keep close to my chest. I’m in it to win the entire competition.”

Joyce said: “It’s going to be a pleasure to get into the ring and show my class on Friday.”

Dickens said: “Carlos is emotional already, you can see that by looking at him. He’s got the EBU EU belt which I haven’t had yet, so I’ll like to pick that up.”

Walsh said: “I’m grateful, and I wanted to be one of the opponents who was picked, so I will see Hairon Socarras on Friday.”

McCullagh said: “I wanted a red ball, but being blue ball number four is just the same. They’re all quality lads so you’re going to be up against it and in a quality fight no matter who you pick.”

Araujo said: “On Friday, McCullagh is going to be in a fight with a real Mexican.”

MTK Global Professional Development Coordinator Jamie Conlan added: “Leigh Wood and David Oliver Joyce stylistically is a great fight, but Ryan Walsh vs. Hairon Socarras for me will be the fight of the round.

“I was surprised that he picked Walsh because he’s the betting favourite and the most experienced, so it’s going to be a really interesting night on Friday.”

Jazza to bank on amateur experience

He won the ABA title there as an amateur 10 years ago at the age of 18, and now returns to the venue to compete in Friday’s huge #GoldenContract featherweight quarter-finals.

To some boxers, only having three days to study his opponent may be a problem, but Dickens is taking it all in his stride and plans on using that past amateur glory at York Hall to his advantage.

Dickens said: “The place is a great omen for me. I won the ABAs there 10 years ago aged 18, and I then turned professional to experience nights like this.

“York Hall will be bouncing, and without all of the other opponents, I can’t be the best version of myself. Every single boxer in the tournament is a respected warrior, so good luck and God bless.

“On fight night, fans can expect to see a warrior’s waistcoat, me walking out to Solsbury Hill by Peter Gabriel, and then a win at all costs.”

Ten fights, ten wins. That’s how many times Ryan Walsh has stepped into the York Hall cauldron and been victorious.

The British featherweight champion will attempt to do so once again when he competes in Friday’s huge #GoldenContract featherweight quarter-finals.

Walsh (24-2-2, 11 KOs) is the current betting favourite for the tournament, and he thinks fighting at a familiar venue like York Hall gives him an advantage over his rivals.

He said: “York Hall is my home. We’ve had some great nights there as a family where we’ve picked up titles, and it is a good stomping ground for us. I think all of the locals and neutrals will be rooting for me.

“There will be lots of fans there supporting different fighters so that will make it a good night, but I’ve got no doubt that the ‘Farmy Army’ will be the loudest and proudest there, so I’m looking forward to hearing them once again.

“The build up to this has been great and all of my preparation has gone really well, so we’re on course to peak at just the right time. I’m really happy with the work that we’ve done and I’m really excited to be getting back in the ring.

“It’s a solid line-up with eight good fighters, and it’s a great boost that it’s on Sky Sports and ESPN+ too. The tournament deserves a TV platform and I’m sure we’ll all deliver.”