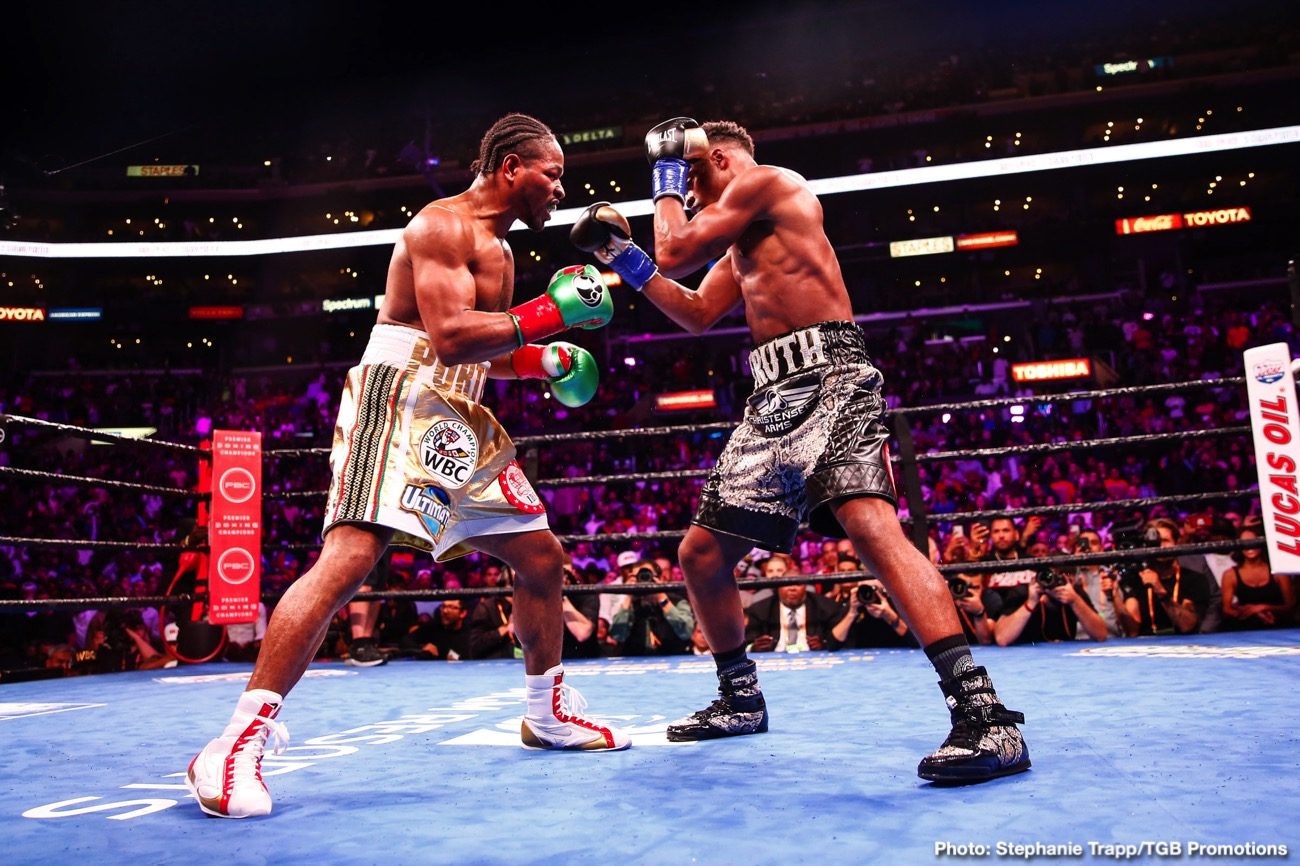 By Kenneth Friedman: Errol Spence Jr. opens up as a 6/1 favorite to defeat challenger Danny Garcia on January 25 on Fox Sports Pay-Per-View. IBF/WBC welterweight champion Spence (26-0, 21 KOs) is a -600 favorite over +400 Danny Garcia in the early odds by betonline_ag. The fight still hasn’t been officially announced, but it’s expected to.

With Spence-Garcia being televised on Fox PPV, it’s important for it to be announced as soon as possible. January is only 3 months away.

Spence defeated WBC welterweight champion Shawn Porter (30-3-1, 17 KOs) by a 12 round split decision last Saturday night in front of a big crowd of 16,702 fans at the Staples Center in Los Angeles, California. The fight was shown on Fox Sports Pay-Per-View. The early tracking numbers are over 300,000 buys for the Spence vs. Porter fight.

Those are excellent numbers, and close to what Spence brought in for his last fight against Mikey Garcia in March.  Spence has arguably become the #1 PPV fighter in the U.S overnight. It used to be Saul Canelo Alvarez before he signed with DAZN. Before him, it was Floyd Mayweather Jr.,

Garcia entered the ring following the Spence-Porter to call Spence out. That was a surprise to Spence, because he’s not used to top fighters wanting to face him. The only elite level fighter that shown a desire to face Spence is WBO welterweight champion Terence Crawford, but he’s promoted by Top Rank. That’s not a doable fight due to different promoters and networks that would be involved in a fight between Spence and Crawford.

Spence was interested in fighting Danny in the past, but he never showed a lot of enthusiasm in making that fight happen. Garcia has been busy fighting these guys in the last two years: Adrian Granados, Brandon Rios, Porter and Keith Thurman. Danny lost to Porter and Thurman in close 12 round decision defeats.

“I don’t know, they’ve been looking for me for a long time, now they got in the ring (Danny Garcia) looking to challenge me,” said Spence in reacting to Garcia coming into the ring to challenge him last Saturday night. “We’ll see what happens. We hope to see what happens with [Manny] Pacquiao, or a rematch with Porter. why not?” said Spence in talking of two other options for his next fight.

It’s still not official that Spence will be facing Danny Garcia next. There’s an outside chance that Spence could face WBA welterweight champion Manny Pacquiao if he wants to fight him. Pacquiao watched the Spence-Porter fight last Saturday, but he kept quiet about whether he’s interested in facing Spence. When Pacquiao wants to fight a particular fighter, he lets his fans know about it. His silence after Spence’s win suggests that he’s not keen on facing him.

Pacquiao seems to be leaning in the direction of a fight against former four division world champion Mikey Garcia for early 2020. Mikey is already talking about the Pacquiao fight, and he sounds confident that it’ll get made.

“I am a big fish. Now I make the decisions,” Spence said after his fight with Porter.

Fans not excited about Spence vs. Danny Garcia fight

On social media the boxing world has criticized Danny Garcia as an unappealing option for Spence’s next fight. Although Garcia (35-2, 21 KOs) is an excellent fighter, the fans want to see Spence another fighter. They specifically want Spence to face Pacquiao or Crawford. Garcia 31, isn’t on their list right now. It doesn’t help Danny that his record is 2-2 in his last 4 fights.

Danny needs to do rebuild more before he challenges for a world title. It’s too late for that now, as Spence’s management at Premier Boxing Champions have already selected Garcia as Spence’s next opponent  for January 25.

“Crawford needs me more. I don’t need him,” said Spence in letting the fans now that he doesn’t wish to fight WBO welterweight champion Crawford.

Spence went on to say that Crawford’s last fight against Amir Khan brought in only 100,000 buys on PPV buys on ESPN last April.  Crawford (35-0, 26 KOs) is in a bad spot to try and get a fight against Spence right now given his low PPV totals. That was the second pay-per-view fight for Crawford. His initial fight on PPV against Viktor Postol in 2016 is said to have brought in around 50,000 buys. Crawford-Postol was a horrible fight for PPV

Who is the best pound-for-pound boxer in the world TODAY?