Chisora to Price: “You’re NOT in my league!” 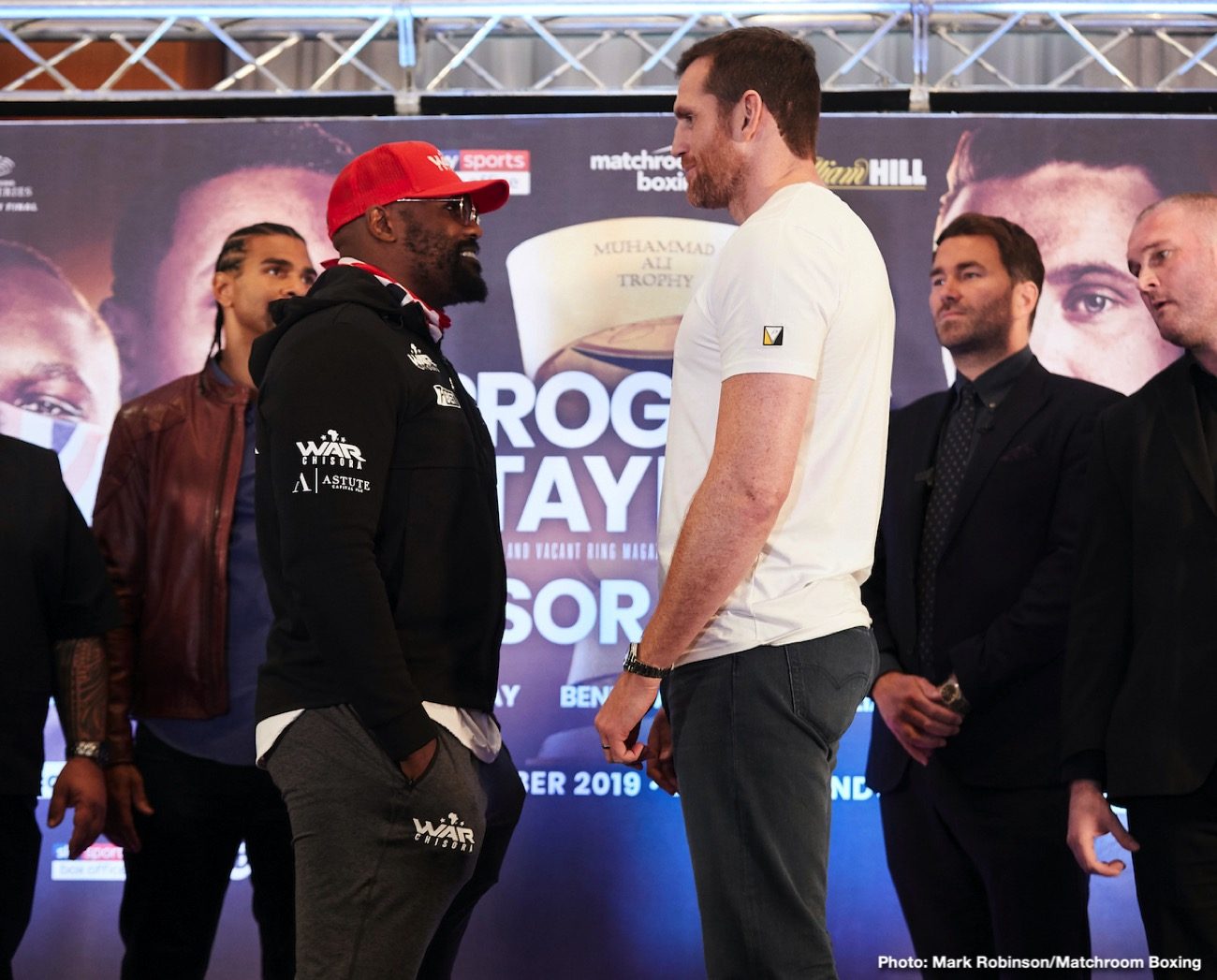 By Tim Royner: Dereck Chisora took it to the gutter during Thursday’s final press conference by playing the sound of sheep going to a slaughterhouse, and telling David Price that he’s going to “murder” him this Saturday night. Chisora, 35, is obviously trying to sell the fight with Price, but it was bad taste on his part to talk about wanting to “kill” him. If something does happen to Price, Chisora’s previous comments will be highlighted.

Price (25-6, 20 KOs) is was brought in several weeks ago as a replacement after Chisora’s originally scheduled opponent Joseph Parker was bitten by a spider, and couldn’t make the fight.

Chisora (31-9 KOs) and Price at the co-feature attraction on the Regis Prograis vs. Josh Taylor card on DAZN and Sky Box Office at the O2 Arena in London, England.

Both Chisora and Price are in their mid-30s, and seen as two guys that failed to live up to their early hype. Chisora did fight for a world title against WBC heavyweight champion Vitali Klitschko in February 2012, but he lost a wide 12 round unanimous decision. The scores were 118-110, 118-110 and 119-111.

It would have been worse for Chisora if Vitali hadn’t injured his left shoulder in round 2. He was forced to fight the last 9 rounds using only his right hand. The 6’8″ Vitali turned southpaw and used his right hand as a jab after the injury, and totally dominated Chisora. What’s interesting is Klitschko gave Chisora a title shot despite the fact that he’d lost 2 out of his previous 3 fights before that. So even back then, Chisora wasn’t much of a contender.

“That’s sheep going to the slaughterhouse. I’m going to kill this guy,” said Chisora about Price during today’s press conference. “I’m going to murder this guy. Everybody has power in the boxing game. He has to be aware of what I can do. We’re going to bring war, I can’t box. Listen, I don’t need to sell anything. You’re not in my league, you have to understand. Bing, bing, bombs away, he’s getting knocked out! I’m happy to walk onto one but I will deliver one.”

With Price’s fragile mandible, he’s at risk of being knocked out at any time in a fight. However, Price has mostly had problems during his career against taller fighters over 6’2″. Chisora doesn’t have much height, and he’s going to require that Price stand still for him to land his shots. If Price is able to keep Chisora at range, he could dominate him with his jab.

Price’s conditioning may be a problem for him. In many of his defeats during his career, he’s run out of gas and wound up getting halted. That was the case in Price’s second fight with Tony Thompson, and in his losses to Christian Hammer, and Alexander Povetkin. Even domestic level heavyweight Kash Ali almost stopped Price after he emptied his tank in the 5th round last March. Unfortunately for Kash, he got a little careless and walked into a big uppercut from Price in the 5th. The fight was halted moments later after Kash tackled Price and bit him on the chest.

“I expect it to be a long fight and a painful fight for Derek because my accuracy is the telling point. I expect a knockout win,” said Price.

If Price starts fast and is able to land his best shots, he’s got the power to end this fight early. It would be better for Price to go all out early rather than letting Chisora walk him down, and land one of his big head shots. Price doesn’t have the chin to take more than one or two hard punches from Chisora without getting knocked out.


« Hearn FURIOUS at Lomachenko being given Franchise tag without fighting Haney