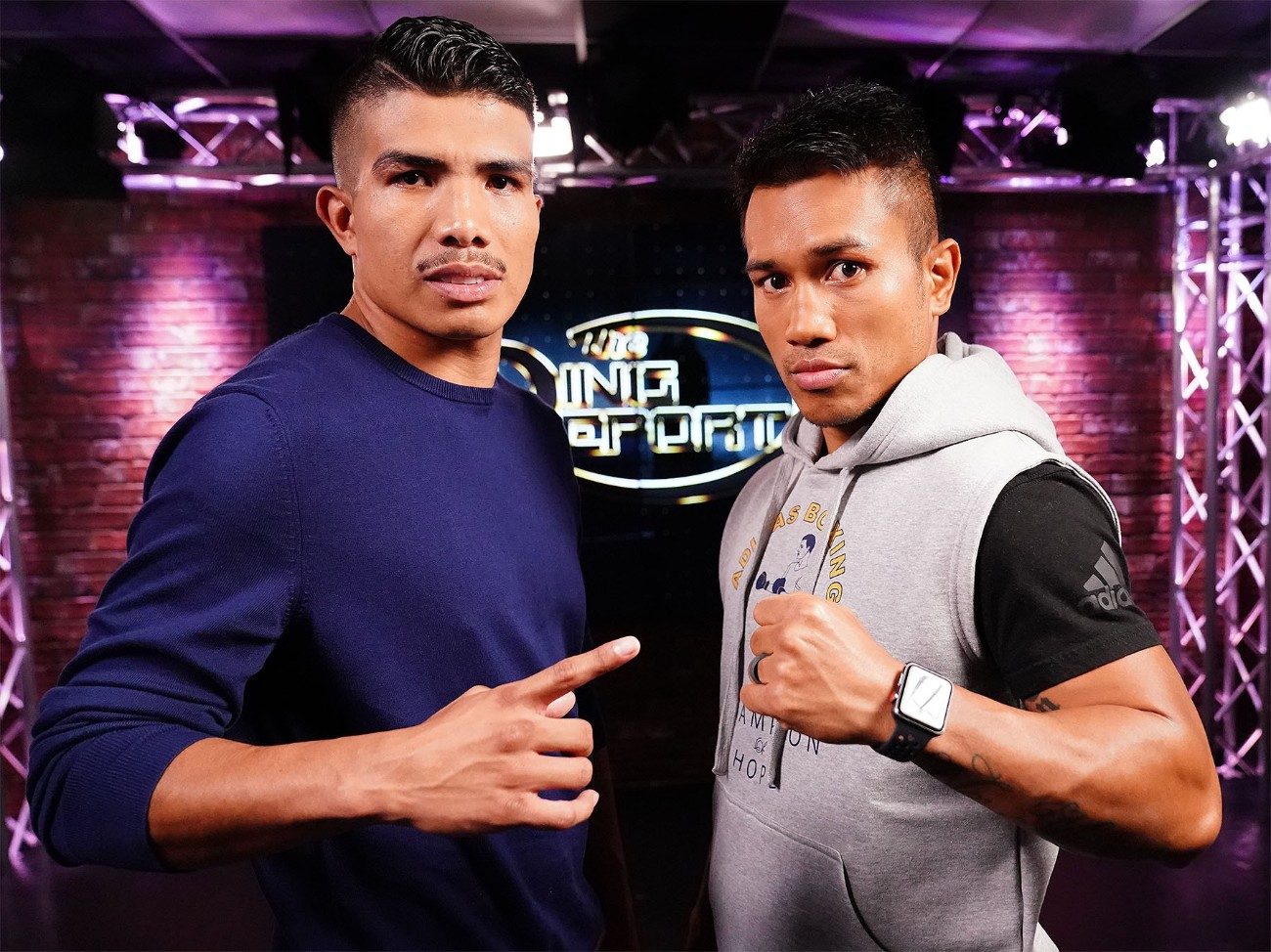 Carlos “The Solution” Morales (19-4-3, 8 KOs) and Mercito “No Mercy” Gesta (32-3-2, 17 KOs) discuss their upcoming 10-round lightweight battle on the Oct. 24 edition of Ring Report, which will air after Thursday Night Fights. The seven-minute segment will set the stage for their upcoming fight on Nov. 14 at the Belasco Theater in Los Angeles. All the action, both in and out of the ring, will be streamed live on RingTV.com and on Facebook Watch via the Golden Boy Fight Night Page beginning at 10:00 p.m. ET/7:00 p.m. PT. The series will also be available on regional sports networks around the nation.

In this candid interview, both fighters discuss the major changes they’ve made to their camps as they prepare for one of the most challenging and exciting bouts of their careers.

“I’m going to show my hunger in this fight,” said Carlos Morales. “If I don’t win this fight, my career will go in the toilet. I’m 29 years old, and I need to fight for a world title next. That’s why I need Mercito Gesta on my resume.”

“For me, it’s not about winning or losing,” said Mercito Gesta. “I’m here because of the love I have for the sport. A loss wouldn’t hurt me, but at the same time I’m confident I’m going to win. I’m the natural 135-pounder, and I’m the stronger one.”

Additional context and commentary will be shared in the Ring Report episode, airing this Thursday.

Morales vs. Gesta is a 10-round lightweight fight presented by Golden Boy. The event is sponsored by Tecate “THE OFFICIAL BEER OF BOXING.” The fights will take place on Thursday, Nov. 14 at the Belasco Theater in Los Angeles. The event will be streamed live on RingTV.com and on Facebook Watch via the Golden Boy Fight Night Page beginning at 10:00 p.m. ET/7:00 p.m. PT. The series will also be available on regional sports networks around the nation. To see when and where the series is available in your area, click here.

Tickets for Morales vs. Gesta are now on sale here and start at $30, not including applicable service charges and taxes.

Mauricio “Trompas” Pintor has had a busy year leading up to the biggest fight of his career, in March he outpointed Deigo Cruz over 10 rounds to pick up his WBC Latin belt on Telemundo. He later reappeared in the summer series, blasting out late sub Miguel Angel Martinez in 2 rounds. Pintor, the nephew of Hall Of Famer Lupe Pintor, has high hopes that a win on Friday night will earn him a spot in the rankings and a step closer to a title shot.

John Karl Sosa, 27,of Caguas, Puerto Rico was a stellar amateur before going pro in 2012. Carrying the momentum into the paid ranks, in 2014, Sosa was recognized by the WBO as one of the best prospects of Puerto Rico. John Karl started his career 13-0 before getting his first taste of defeat, losing to Alan Sanchez in Las Vegas, NV. Never being one to shy away from a challenge, Sosa took on Eddie Gomez and Rashid Ellis back to back, losing two close spirited decisions in his efforts to prove he belongs at the top. After some time off to rethink his career, Sosa bounced back with a knockout win this past May and is motivated to get back in the mix and win his first regional belt this Friday.

The Co-main event of the night will feature a pair a Mexico City Lightweights, Jorge Anhuar Batalla(6-2) will square off against crosstown rival Pedro Ivan Bernal(5-1) over 8 rounds.

Tickets available on Ticketmaster.com.mx or visiting the box office at Blackberry Auditorium