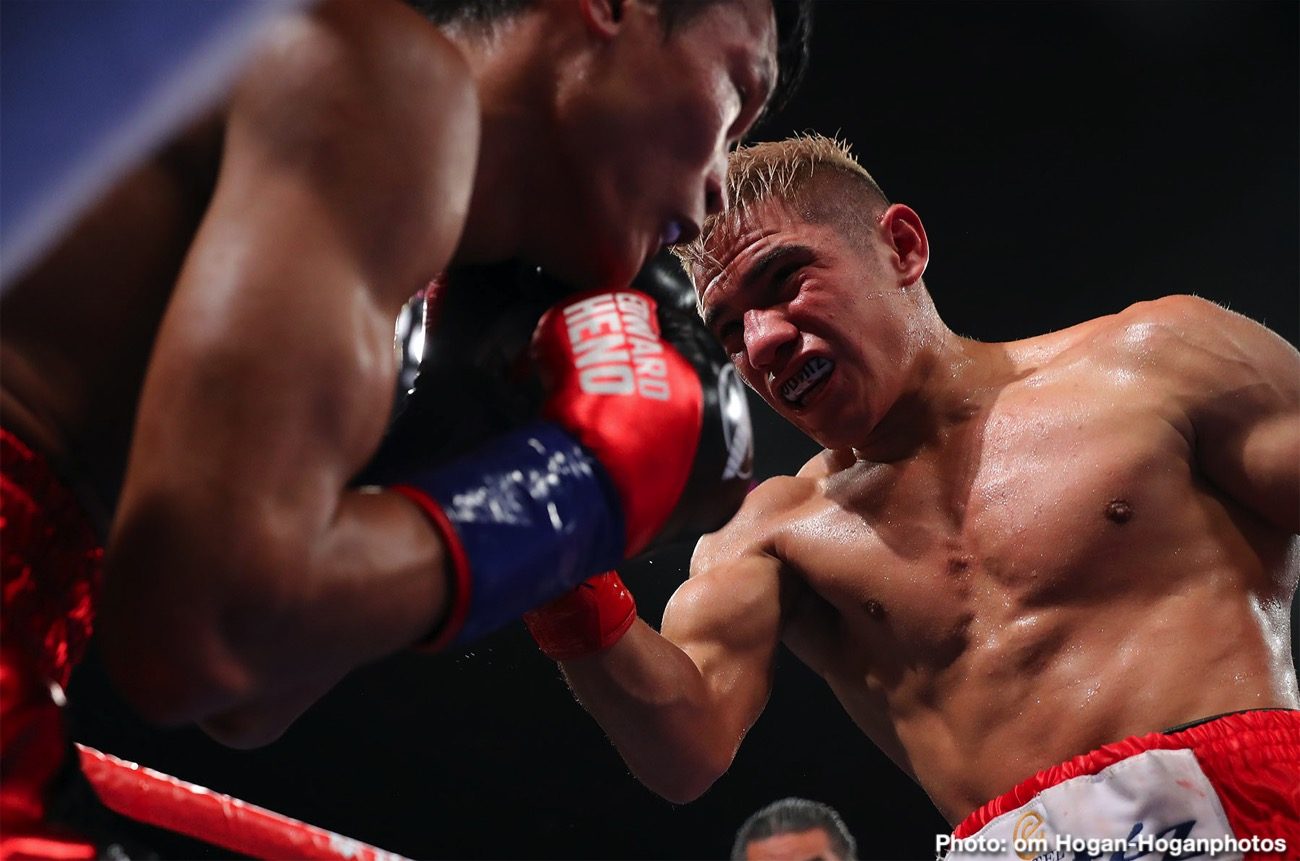 Elwin “La Pulga” Soto (16-1, 11 KOs) of Mexicali, Mexico made the first successful defense of his WBO Light Flyweight World Title against Filipino contender Edward “The Heneral Fighting” Heno (14-1-5, 5 KOs) via 12-round unanimous decision in the main event of the Oct. 24 edition Thursday Night Fights at Fantasy Springs Casino in Indio, Calif. Soto won with scores of 114-113, 115-112 and 115-112. The event was streamed live on DAZN, RingTV.com and on Facebook Watch via the Golden Boy Fight Night Page. The series is also available on regional sports networks around the nation.

“I felt I need to throw more punches,” said Elwin Soto. “I won the early rounds, and I won the later rounds. But there were some rounds in the middle where he beat me. Either way, I won the fight, and I’m ready for anyone. I just want to keep fighting, no matter who it is.”

In the co-main event, Angel “Tito” Acosta (21-2, 21 KOs) of San Juan, Puerto Rico made his debut at 112 pounds via fifth-round knockout against Raymond Tabugon (22-11-1, 11 KOs) of General Santos, Philippines for the vacant WBO International Flyweight Title. The fight was stopped at 1:02 of the aforementioned fifth round of a scheduled 10-round bout.

“I felt strong in my first fight at 112 pounds,” said Angel Acosta. “I now want to fight against the best fighters in this new weight class. With this title, I’m now ranked in the top five, so I want any of the top fighters.”

“He was a tough fighter, but the game plan worked,” said Raul Curiel. “We got in there, worked the body and got him out. We had a great training camp with lots of good sparring, so that’s why we looked the way we did tonight.”

Jonathan “Thunder” Navarro (17-0, 9 KOs) of East Los Angeles, California scored a second-round technical knockout win against Lebin Morales (17-6-1, 8 KOs) of Juigalpa, Nicaragua in an eight-round super lightweight bout. The fight ended when Morales’ corner threw in the towel at 1:49 of the aforementioned round.

“I felt great in there,” said Jonathan Navarro. “For this camp, we took it back with my father. He likes to train in a more amateur style. So we incorporated more movement. That’s why we were countering a lot.”

“It was a Great fight,” said Aaron McKenna,”My opponent was rough durable opponent. It’s great to have another six rounds in the books. I learned a lot given that he was so durable.”

“I noticed he was hurt,” said Nick Sullivan.”But my team always tells me to be patient. So, I stayed patient, went in there and got him out.”

Soto vs. Heno was a 12-round fight for the WBO Light Flyweight World Title presented by Golden Boy in association with Zanfer Promotions. The event was sponsored by Tecate “THE OFFICIAL BEER OF BOXING”. The fight took place Thursday, October 24, 2019 at Fantasy Springs Resort Casino in Indio, Calif. The event was streamed live on DAZN, RingTV.com and on Facebook Watch via the Golden Boy Fight Night Page. The series is also be available on regional sports networks around the nation.

Headlining the NINTH straight sell-out of the acclaimed ‘Hollywood Fight Nights’ series, the 24-year-old Bohachuk dropped Brunson in the third round and twice more in the fourth with heavy-handed rights to the head before the bout was stopped at the 2:50 mark of the fourth stanza.

Said the Abel Sanchez trained Bohachuk, “We don’t plan for the knockouts but I can feel as the fight is going on that I’m breaking down my opponent. Tyrone Brunson is a very good, strong fighter and I’m very happy with my performance. We had a great training camp and I’m glad to show what I can do again.” With the victory Bohachuk earned the WBC Continental Americas Super Welterweight Title.

In an outstanding six-round super bantamweight battle, Adrian Montoya, a native of Sonora, Mexico improved to 11-0 (9KOs) with a unanimous decision victory over Humberto ‘Filly’ Rubalcava
(11-2, 7 KOs) of Westminster, CA. Scores were 60-54 twice and 58-56, all for Montoya.

Junior lightweight Adrian Corona, (7-0, 1 KO), of Rialto, CA continued to impress the ‘Hollywood Fight Nights’ crowd with a six-round decision over the game Emmanuel ‘MAN-E’ Castro, (2-7-1) of Maywood, CA. Scores were 60-54 all in favor of the 19-year-old Corona.

In an upset, Jamel Reynolds, (2-7, 1KO), of Los Angeles, CA won a four-round unanimous decision over previously undefeated Marco Deckmann, (3-1, 3 KOs), of North Hollywood, CA. Scores were 38-36, twice and 38-37 for Reynolds who dropped the valiant Deckmann twice in the fight.

In the junior middleweight division Nathan Weston, (6-0-2, 3 KOs) of Los Angeles, CA fought to a four-round majority draw against Isaac Freeman, 3-8-2, 3 KOs), also of Los Angeles. Scores were 39-37 for Freeman and 38-38 on the other two judges’ cards for the spirited contest.

The event was streamed live internationally, at www.360Promotions.us and all 360 Promotions’ social media pages (Facebook, Twitter) as well as the 360 Promotions’ YouTube channel with commentary on by former featherweight world champion, ‘The Flushing Flash’ Kevin Kelley and Ring Magazine Editor-in-Chief Doug Fischer in addition to ‘The Real Fight Girl’ Cynthia Conte.

“I felt good to get back in the ring after being sidelined with a minor injury for a few months,” said Correa, who was an alternate on the 2012 USA Olympic team. “I got another knockout and I’m ready to step up in competition. It’s been hard getting fights in the States, but I know if I keep winning, I’ll get an opportunity to shine on a big card.”

“Eros handled his business in Mexico with another knockout performance,” said Andrew Bocanegra, Correa’s co-manager. “We believe he’s ready for a step-up fight and right now we are talking to a few promoters about getting him a fight in the USA. It’s just a matter of time before he’s in a meaningful fight with a named opponent. All we can do is keep building him until we land that big fight.”

“Eros is looking better with each fight,” said Jessie Sanchez, co-manager of Correa. “He has a lot of talent. All we need to do is get him with the right promoter.”

Undefeated super lightweight Kendo “Tremendo” Castaneda lived up to his nickname last night, stopping veteran Stan “The Man” Martyniouk in the six round of the main event, which headlined another installment of RJJ Boxing on UFC FIGHT PASS®, presented by RJJ Boxing Promotions & Joey Gilbert Promotions, in association with Silver Legacy Resort Casino at THE ROW.

Castaneda (17-0, 8 KOs), the reigning NABA super lightweight champion, was impressive in this non-title fight, which was contested in front of a sold-out crowd, by attacking his Estonian-born opponent Martyniouk (20-3, 6 KOs) from the opening bell.

“The plan was to dominate from the opening bell, starting strong and finishing strong,” a jubilant Castaneda said after the fight. “It was the greatest fight of my career thus far, because I fought an all-around, well experienced, well known boxer.”

In his most significant fight to date, 25-year-old Castaneda battered his overmatched foe who too often was trapped on the ropes, firing right-hand shots to the head and lightning-quick combinations, until the end ultimately came in the sixth round. Castaneda unloaded on Martyniouk, who was dropped on the canvas, forcing referee Vic Drakulich to halt the match.

“I finished him off as a lefty with punches in bunches when I had him on the ropes. My performance was ‘Tremendo’ and big names are coming. I want big names! It doesn’t matter who for the ‘Tremendo’ one, I just want big names!”

The co-featured event between local favorite Oscar “Chapito” Vazquez(1-5-2-1, 3 KOs) and Mexican bantamweight Gilberto Mendoza (15-7-3, 7 KOs) battle to an eight-round majority draw, much to chagrin of his many fans in attendance.

Fighting for the first time in 17 months, Vasquez wanted to fight the much taller Mendoza on the inside, moving forward at a steady, relentless pace. Mendoza, who has his fair share of fans from where he lives, Modesto (CA), faired equally in an action-packed match in which both fighters stayed in the pocket and went toe-to-toe.

Another Reno-based fighter, featherweight Ricardo Lucio-Galvan (3-0, 2 KOs) treated his fans to a dominant four-round unanimous decision over Mobley Villegas (2-1, 2 KOs), of Amarillo, Texas. The quick-handed Lucio-Galvan, fighting for the first time in 20 months, didn’t show any rust, successfully jabbing his way in the opening rounds, dropping his opponent in the fourth.