“Daniel Dubois Has The Jab Of Larry Holmes” – Frank Warren 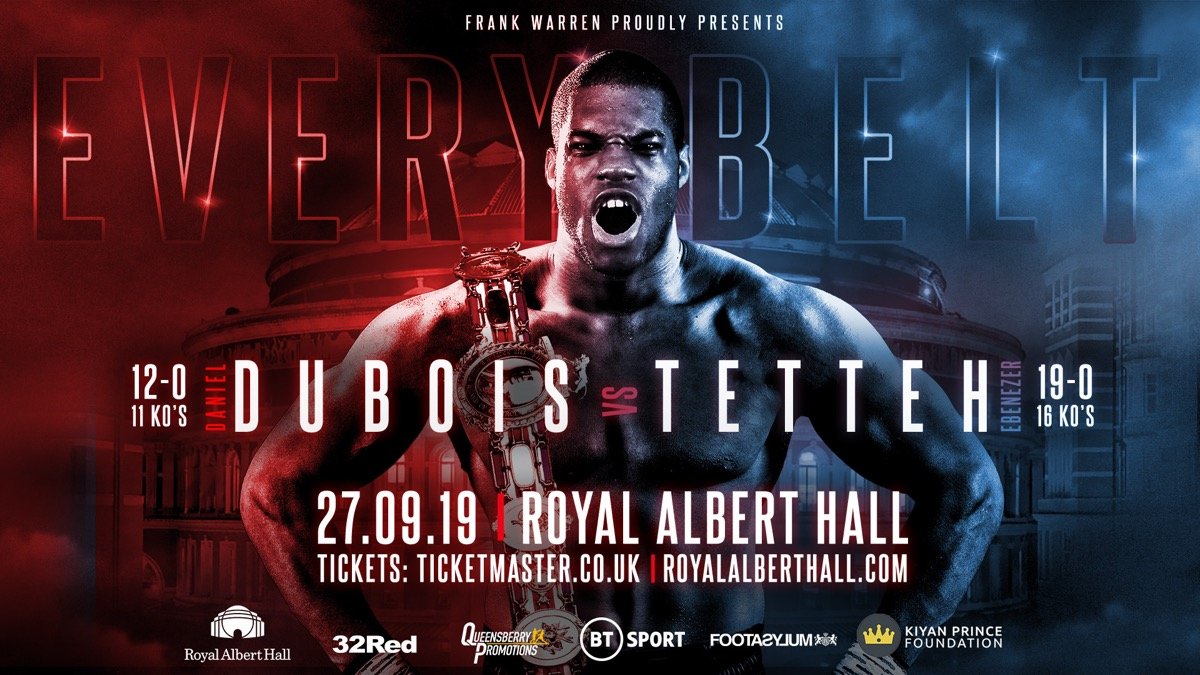 The Hall of Fame promoter admits he has burdened Dubois by describing him as, ‘The best young heavyweight in the world.’

Now he has jabbed even more praise towards the young star whose career he is masterminding.

Holmes held a world heavyweight championship from 1978 to 1985 making 20 world title defences a record only bettered by Joe Louis and Wladimir Klitschko.

Dubois has to live up to his promoter’s high praise when he challenges Ghanaian Ebenezer Tetteh (19-0, 16KOs) for the vacant Commonwealth heavyweight crown at London’s Royal Albert Hall on Friday (September 27), live on BT Sport.

“As my boxing mentor, the late Ernie Fossey said, ‘If you can’t jab, you can’t fight.’

“Good fighters have great jabs and Daniel has a great jab. It is a big comparison to make at this stage of his career, but Daniel has that Larry Holmes jab. I love seeing fighters who can jab.”

If Dubois overcomes Tetteh it will be his seventh professional championship in just 13 fights.

Last week he was voted Young Boxer of the Year by the Boxing Writer’s Club and picks up that award at a gala dinner next month.

Dubois is also ranked 15 by the IBF and seven in the WBO rankings for the belts owned by Andy Ruiz Jr.

He hammered Nathan Gorman to become British champion in his most recent fight and Warren added: “He has had a fantastic year and gone from strength to strength.”

DANIEL DUBOIS INSISTS he has no intention of aborting his mission to collect every belt available to him on his route to the top of the heavyweight division.

Dynamite Dubois has exploded onto the scene since making his professional debut in April 2017 and since that time has gathered an incredible six titles in just 12 fights in the pro game.

The WBC Youth, Southern Area, English, WBO European and Global, along with the British have returned to the Dubois household following his successful ring exploits so far and he will bid for a seventh when he challenges for the vacant Commonwealth title at the Royal Albert Hall on Friday September 27.

“It is a nice little array of belts there!” proclaimed Dubois, who takes on the unbeaten Ghanaian Ebenezer Tetteh for the Commonwealth crown. “I have been collecting them up.”

Dubois, with 11 KOs to his name, is happy to travel the traditional journey towards heavyweight stardom and he believes the Commonwealth represents a natural sequence of events along his career path.

“It definitely is and the Commonwealth belt is a big one as well and a step up. It is a good challenge and I am sure he will bring everything he has got to the table.

“I’ve got to be focused, not overlook this guy, and make sure I am 100 per cent ready.”

The title of the show at the Royal Albert Hall is ‘Every Belt’ and Dubois is warming to the theme, especially as it appears that no Englishman has ever collected the full set of Area, English, British, Commonwealth, European and world titles, with English honours only having been in existence for around 16 years.

“Frank (promoter, Warren) is guiding me in that direction to pick up every belt along the way and it is looking like it is going to be that way.

“My path is set out, these belts are flying towards me and good fights can be put together. I can defend and win these titles.

“Carrying on doing what I am doing is most important but if I can pick up these good titles and put them on my CV, I am definitely going to go for it.”

EBENEZER TETTEH BELIEVES he will not be intimidated by the hulking presence of Daniel Dubois in the opposite corner when the pair collide with the vacant Commonwealth heavyweight title at stake on Friday September 27.

The Royal Albert Hall provides a historic setting for what should be an explosive title encounter as Dubois bids to win a seventh championship belt in just his 13th professional fight..

The unbeaten Tetteh, who has 16 KOs to his name from 19 fights, suspects previous opponents of the 22-year-old Londoner have considered themselves beaten before entering the ring.

Tetteh insists he will meet fire with fire and will not go into retreat once trading commences and says his own punching potency will shock Dubois, who has stopped all bar one of his 12 opponents to date.

“Daniel Dubois has never tasted power like mine,” said the 31-year-old from Accra. “He thinks he is going to walk in and I will be on the backfoot. Once I start landing he will realise he is very wrong.”

Tetteh went on to stoke the fires further by labelling Dubois as a ‘scared boy’.

“I am not like other opponents. People get in the ring with Daniel and get scared. The difference is that I see Daniel for what he really is. He is not a scary man, he is a scared boy.”