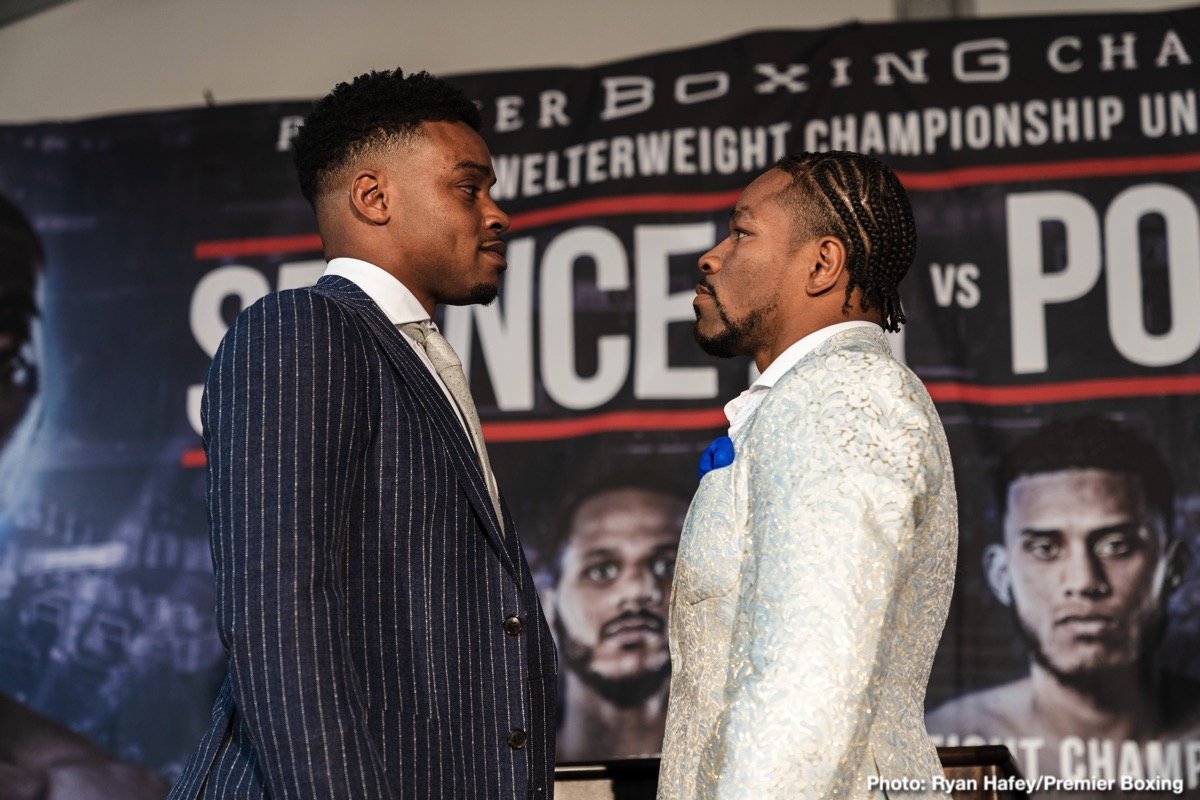 By Jim Dower: WBC welterweight champion Shawn Porter is planning on leaving no stone unturned in preparing for his unification match against IBF champ Errol Spence Jr. this month on September 28. Shawn says the Spence fight is coming at the “right time” for him. He’s going to be prepared 100 percent by end of the month, and will be ready to deal Spence his first defeat.

Porter wants to throw an extra 20 punches per round

He wants to throw an extra 5 to 20 punches per round when he gets in there with Spence this month. The extra punch volume by Porter (30-2-1, 17 KOs) could prove to be the deciding factor in the fight. In Porter’s two defeats to Kell Brook and Keith Thurman, he couldn’t get near enough to them to let his hands go. Thurman used movement to avoid Porter most of the fight. For his part, Brook tied up Porter in clinches each time he got in punching range, and that stifled his offense.

“Iron sharpens iron,” said Porter to Behind The Gloves about his sparring with David Benavidez. “I have the opportunity to shock the world, and looking forward to that. I’ve been gearing up for this for a long time, and the opportunity is here against the greatest welterweight out there. There’s only a couple of us. Keith Thurman lost a couple of months ago. So there’s only a few left. Right now, it’s me against Errol, and I’m looking forward to it. The punch output was great. Maybe climb up another 10 to 20 punches.

I’m a two-time world champion. I did not get here by out-brawling everybody, and hurting everybody by whatever you guys think. 100 percent, that’s what I’m here to do; I’m here to prove a lot of people wrong, and prove a lot of people right. In the process, I’ll motivate and inspire, reach and teach and live a good life. This fight is right on top for myself, and my team,” said Porter.

Sparring with David Benavidez is going to get Porter in prime position to handle whatever Spence dishes out. Benavidez has heavy hands, and he’s a nonstop pressure fighter. Porter is doing well to spar with talented guys like this.

In addition to sparring with Benavidez, Porter also plans on working with former two division world champion Lamont Peterson. This should be helpful for Porter, because Peterson fought Spence last year in January 2018. Although Peterson lost the fight to Spence by a 7th round knockout, he saw a lot of different things that Porter can work on.

Fans have mixed opinions about whether Porter should box or slug with Spence, as there’s positives and negatives from each approach. Porter didn’t look good when he stayed on the outside in his last fight against Yordenis Ugas last March. Spence has the longer reach, and he’s a very good boxer when he’s focusing on that.

“We’re in a blessed position right now. September 28, most time fighters say it can’t come soon enough; It’s coming right on time,” said Porter. “I’m going to see this fight over and over until I get inside the ring and put it down. I’m blessed, baby, Good luck,” said Porter in sending message to Spence.

If Porter decides to brawl with Spence, he could be inviting trouble, because he’s one of the biggest punchers in the division.