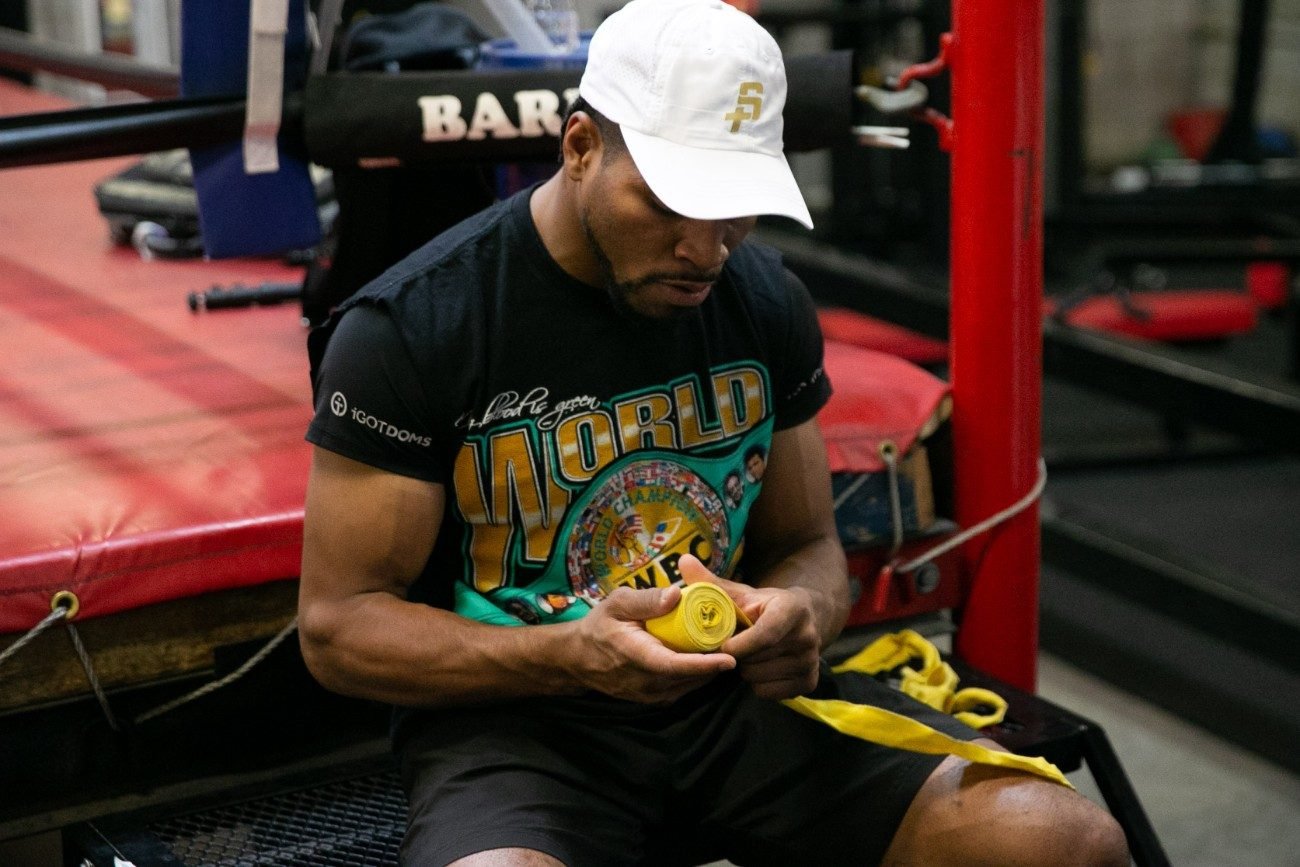 Porter will headline the FOX Sports PBC Pay-Per-View in a highly anticipated welterweight title unification against Errol Spence Jr., while Dirrell defends his belt against unbeaten David Benavidez in the pay-per-view co-main event as part of action beginning at 9 p.m. ET/6 p.m. PT.

Here is what the fighters had to say Wednesday from Barry’s Boxing Gym in Las Vegas:

“I’m expecting there to be adversity for Errol. There’s going to be a moment where he realizes he’s losing this fight. He has to be solid psychologically. I don’t know if he’s going to be in the ring. And, I believe I have the advantage there and that I know how to get into his head.

“I think Errol’s confidence is natural like mine. But I think that he’s fed his confidence to the point where some arrogance has come out. I think he’s going to show that in the fight early on. He’s going to have to adjust. Once he recognizes that, I expect the arrogance to go out the window and that he’ll have to figure it out.

“I’ve never seen Errol go through any adversity in the ring. I don’t think anyone has been able to challenge him the way I can challenge him. I’m really looking forward to it.

“There’s a combination that comes from Shawn Porter that you can’t get anywhere else. It’s the speed, power, agility and intelligence. You have to make a lot of adjustments on the fly and be ready. I’m hard to prepare for. Spence probably has one or two things that he’s expecting, but it’s not going to go that way.

“I’ve been in Errol’s position before and I know what it’s like to think that all I had to do was show up and be me. I’ve gotten to a point where I realize now that I have to do more.

“I don’t think there’s too much to figure out with Errol. The game plan is to make him make the adjustments. Things don’t always go to plan, but I still think I know what he wants to do in there. He’s not going to give you a lot to adjust to, but what he does do, he’s supreme and he’s great at.

“Southpaws always bring the best out of me. I’m young again. You’re going to see the best Shawn Porter.

“I think Errol has a lot more to lose in this fight. He’s never had to deal with a loss, and most people aren’t expecting him to lose. He’s in the perfect position being considered a top welterweight. But from my perspective, I just have absolutely no intention on losing.”

“This is going to be a good fight. David Benavidez is a warrior and I don’t take anything away from him. But I know that I have all the tools to beat him. He’s never fought someone like me. Everyone he knocked out, he was supposed to knock out.

“I had hurt him in the first round… so I just tried just walking him down the second.”

Former Champion @Benavidez300 breaks down his TKO victory over Love back in March. pic.twitter.com/VAJ317DMKc

“I have everything I need in my arsenal. I’m versatile. I can switch it up if I need to. If I need to sit in the pocket, I can. If I need to box, I can. I just don’t think Benavidez is what everyone makes him out to be.

“This win would build my legacy. Some people expect me to lose, and I’m happy about that. This just takes my career to another level.

Dirrell not looking past Benavidez

“I’m not looking past this fight. I’m focused on David Benavidez. After this fight I can talk about unification or whatever. Put first I have to take care of David.

“A loss is a loss no matter which way you put it. Whether you lose by a mile or half a round. That’s in the past and we’re only focused on the future. There’s an undefeated 22-year-old fighter trying to take what I’ve got.

“You put all the work in when you’re in the gym, then you have to leave everything in the ring. We trained too hard to not do that. I’m very confident. At the end of the day, the fans are going to win.

“I’ve seen Benavidez fight before. My coaches have watched him closely and will come up with the game plan. He’s quick, but we’ll be ready.”

“I feel great right now. Everything has been going smoothly and I can’t wait to just go to work out there. All the hard stuff is done, now it’s just maintaining and staying ready.

“I’m excited for this opportunity. I’m well prepared and ready to go. It’s like any other fight. You leave no stone unturned, execute your game plan and do what you have to do to win.

“The fans are going to get what they always get from me. I’m going to come to fight, take care of business and leave everyone with something to remember.

“In a lot of my fights, I just walked guys down. I’ve had guys like Keith Thurman and Danny Garcia fighting just to hang in there, and I wasn’t even fighting to my full potential. I was just walking them down. But my skills are boxing, that’s how I fought at the lighter weights. I got away from what I was good at.”

ABOUT SPENCE VS. PORTER

Ryan Garcia co-feature on Canelo vs. Kovalev card on Nov.2 »