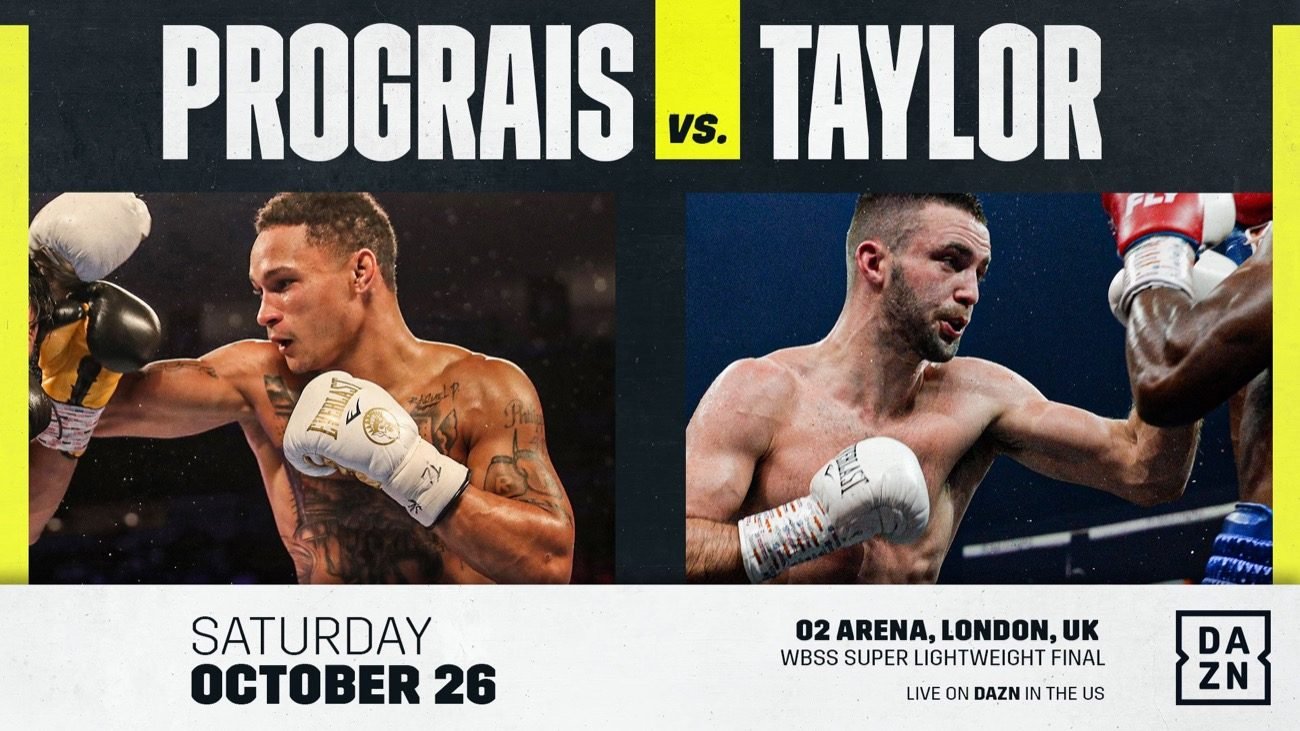 By Barry Holbrook:  Regis Prograis (24-0, 20 KOs) says he’s going out to “beat up” and “hurt” IBF light welterweight Josh Taylor (15-0, 12 KOs) on October 26 in the final of the WBSS tourney at the O2 Arena in London, England. The Prograis-Taylor fight was confirmed officially last Saturday night, and the two 140-lb champions are ready to square off next month on DAZN and Sky Box office in London.

WBA light welterweight champion Prograis (24-0, 20 KOs) is upset at Taylor’s Scottish boxing fans for their insults. They were accusing him of ducking the fight after he pulled out of the World Boxing Super Series tournament. In a statement by Prograis’ promoters at DiBella Entertainment, it stated these as the reasons for him pulling out: “Late payments, scheduling delays, bad faith representations, missed deadlines, and broken promises.”

The organizers of the WBSS tournament were able to fix the problems that Prograis had with them, and bring him back. Prograis is not happy with the trash talking that Taylor’s fans have done in questioning his bravery. He now wants to thrash Taylor to send a message to his Scottish fans, who he says can’t fight for him.

“The fight is officially on. It’s on October 26 out there in London,” said Prograis to Fighthype. ‘So all these Scotland people; all these Scots, they going to swallow they words, because I’m going to f— Josh Taylor up. I’m going to beat him up bad. I’m not playing. Every time I get on, someone saying, ‘I’m ducking Josh Taylor…I sat back and couldn’t say nothing for a while, but now the fight is officially on. He’s going to pay for all that s–t. All these Scottish on Instagram and Twitter, talking all that s–t, they can’t go in that ring. They can’t fight for him. It’s going to be me and him.

Taylor’s fans view it as a 50-50 affair, but the odds-makers have already installed Prograis as the favorite. He’s dominating everyone right now in one-sided fights. Taylor’s recent win over IBF champion Ivan Baranchyk was competitive from start to finish. Taylor took some major shots from Baranchyk, but he was able to able to hang in there to win a decision. That was Taylor’s semifinal fight in the WBSS tourney last May. In contrast, Prograis destroyed WBA champion Kiryl Relikh by a 6th round knockout on April 27 in his semifinal fight in the WBSS tourney.

Taylor’s boxing fans felt that Prograis’ recent decision to pull out of the fight with him as an admission of fear. They didn’t buy Prograis’ excuse that he was unhappy with the WBSS tourney organizers, and they saw it as duck job on his part. What fed into that was all the trash talking that Prograis had done in the weeks before. Prograis said a lot of stuff about Taylor, and then he pulls out of the tourney just when the fight is about to be announced. Taylor’s fans put one and one together, and came up with the conclusion that Prograis had stage fright.

It’s already too late for Prograis to change the perception of Taylor’s fans. They see him as a ducker, and he’s going to prove himself in the final against him. It would be best for Prograis to keep his head, and not erupt into a spontaneous combustion. The fans have a good reason to question his bravery, because the timing of him pulling out tourney. It looked bad that Prograis pulled out of the tourney just when he was scheduled to fight Taylor. The fans want to know why didn’t Prograis pull out of the tourney before his two other fights against Terry Flanagan and Relikh?

Prograis’ is coming apart at the seams since his fight with Taylor was announced, according to Josh’s fans. They smell fear and worry from the highly agitated Prograis. The Louisiana native has lost his cool completely, and is taking it out on Taylor’s loyal boxing fans in showing his frustration.

If this is going to be a war like Prograis is saying it’ll be, then he’ll need to change the way he’s been fighting. In Prograis’ two fights in the WBSS tourney, he’s boxed mostly, and avoided getting hit. Prograis didn’t even try to knockout Terry Flanagan in their quarterfinal fight in the tourney last October. Prograis boxed Flanagan for 12 rounds, and won a unanimous decision. The scores were 117-110, 118-109 and 19-108.  It wasn’t an exciting fight to watch, because Prograis wasn’t mixing it up.


« Arum: Lomachenko will fight next before the end of year