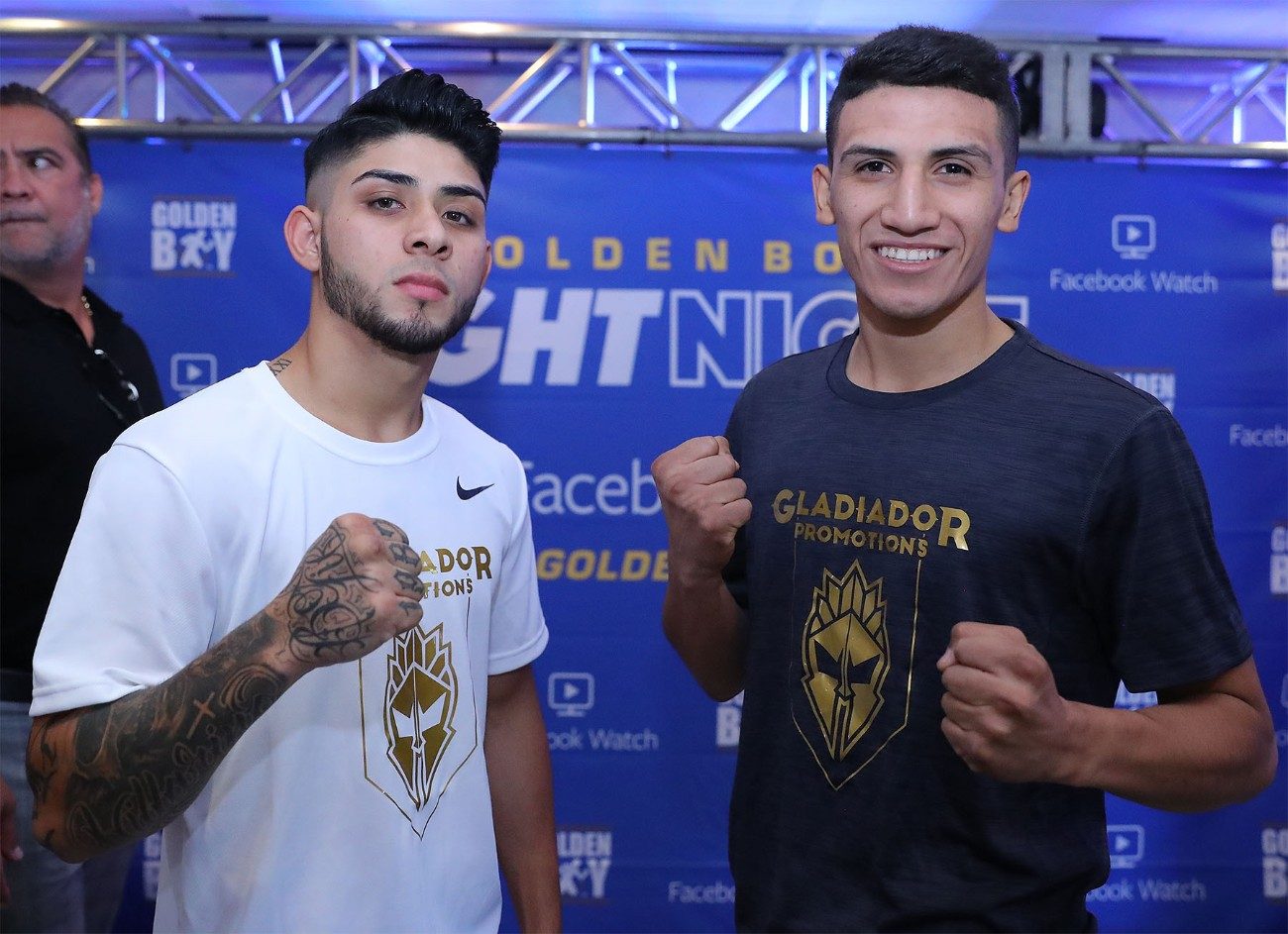 Fighters from the Diaz Jr. vs. Cuadro undercard hosted a final press conference today at the Lucerna Hotel in Mexicali, Mexico ahead of the Sept. 21 edition of Golden Boy Fight Night on Facebook Watch. The undercard is led by the co-main event between hometown favorite Leonardo “El Leon” Baez (16-2, 9 KOs), who announced his signing with Golden Boy, taking on Venezuelan contender Edixon Perez (19-4, 4 KOs) in a 10-round defense of his NABA Super Bantamweight Title.

This Saturday’s fights will take place at the Auditorio del Estado in Mexicali, Mexico and will be streamed live globally on Facebook Watch via the Golden Boy Fight Night Page.

🗣”They may think I’m a trampoline. They may think they can use me as a stepping stone. But that’s not how things are going to go. I came to win this fight. If I lose this fight, it will be the last thing I do in my career.” -Jesus Cuadro #DiazCuadro pic.twitter.com/tHz9mmEKbe

Below is what today’s participants had to say at the press conference:

“I’m very prepared. This fight is very important for me because I’ll be fighting right here in my hometown of Mexicali. I want to thank Golden Boy for taking this card here to my home to make the first defense of my NABA title. I’m happy, I’m motivated, and I’m prepared. ¡Arriba Mexicali!”

“I hope we have a great fight this Saturday. They may think I’m a trampoline. They may think they can use me as a stepping stone. But that’s not how things are going to go. I came to win this fight. If I lose this fight, it will be the last thing I do in my career.”

“We are very prepared for this fight against Dilan Loza. We know it’s a tough fight, but it’s something we have to do. This was an opportunity given to us by Gladiator Promotions and Golden Boy. I think that opportunities arise to be taken. That’s what we are going to do. We are very prepared, and e are ready to give 100% in the ring. And we will show who is best on Saturday.”

“We’re anxious for the fight. We are two days away from this great battle. More than anything, we are very much prepared and ready for that great day. We will go in there with everything.”

“I want to thank Golden Boy for this great opportunity. And, I want to thank my trainers and managers the Saucedo Brothers from Westside Boxing Club for their support. I have prepared a lot for this fight. I’ve prepared to put everything on the line. You will see that on Sept. 21”

“It’s a great honor to be here again to present a great event of Mexico vs. Venezuela. Two great fights and an undercard card full of prospects, which are the promising fighters of tomorrow. In Saturday’s undercard, we’ll have a young man who I just got to know a few months ago. He had a great victory by taking the title away from the undefeated boxer Alberto Melian. I’m talking about Leonardo Baez. He came with a lot of hunger and was set on bringing the title back home.”

“At the same time, I want to welcome Leonardo Baez to the Golden Boy family. I’m glad and honored. I know you will have a great career. I’ve heard it from many former champions. You’ll be defending your title for the first time against Edixon Perez. It’s a tough fight but we have all the confidence in you because we see in you a future world champion.”

Diaz Jr. vs. Cuadro is a 12-round fight for the WBA Gold Super Featherweight Title presented by Golden Boy. The event is sponsored by Tecate “THE OFFICIAL BEER OF BOXING.” The event will take place Saturday, Sept. 21 at The Auditorio del Estado in Mexicali, Mexico. The fights will be streamed live globally on Facebook Watch via the Golden Boy Fight Night Page.

Tickets for Diaz Jr. vs. Cuadro are on sale and are available at Zonaticket.mx.