Jack Catterall vs. Timo Schwarzkopf on Nov.22 in Dubai 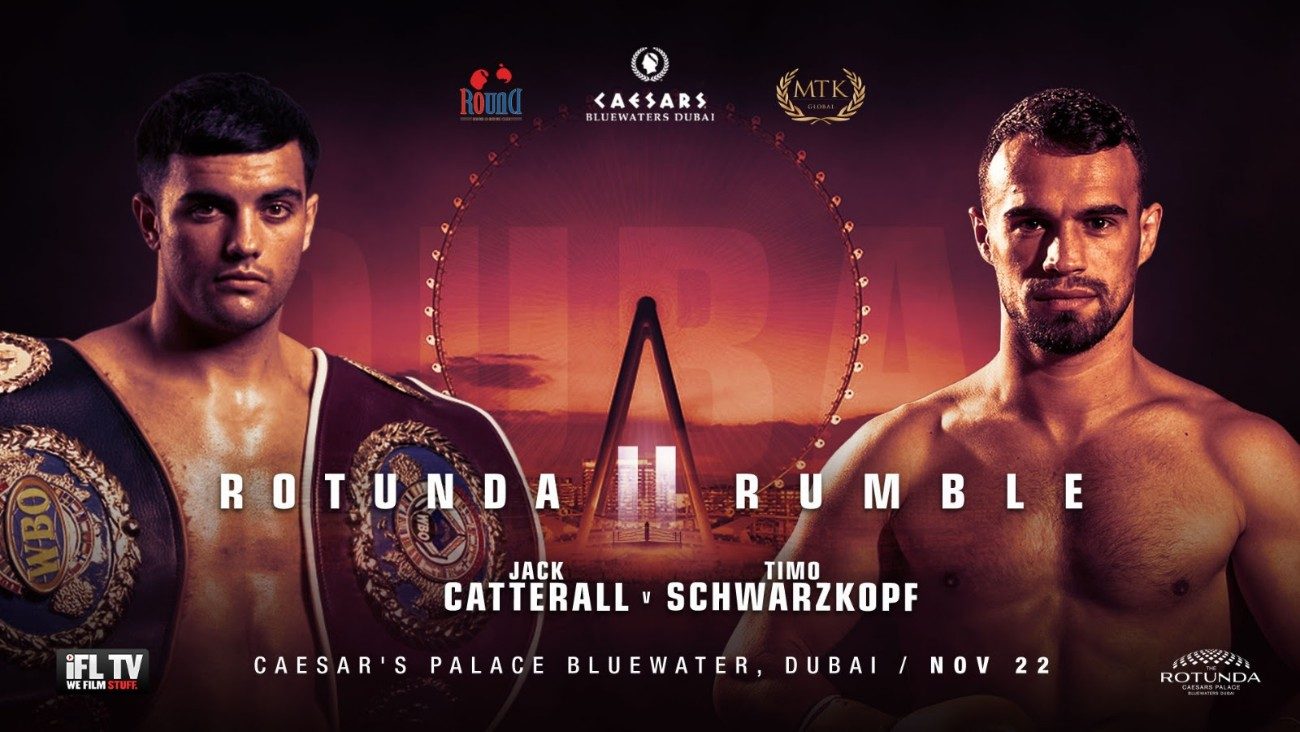 Fans at Caesars Palace will have the chance to watch the undefeated ‘El Gato’ (24-0, 13 KOs) collide with high-class German Schwarzkopf (20-3, 12 KOs) at #RotundaRumble2 – promoted by MTK Global and Ahmed A.Seddiqi’s Round 10 Boxing Club and broadcast in the US on ESPN+ in association with Top Rank and on iFL TV worldwide.

Catterall in position to fight for world title in 2020

With his dream world title shot likely to take place next year should he overcome Schwarzkopf, Catterall is eager to serve up a reminder of what makes him one of the very best 140lb fighters on earth.

Catterall said: “This is great news. I’m pleased to have something to aim for and what gives me that extra motivation is that this is a serious opponent with big-time hopes and dreams of his own.

“Unfortunately for Schwarzkopf, I don’t think he has what it takes to stop me from going where I’m going, which is that world title shot early next year. He’s the perfect step up for me.

“Everyone knows how badly I want that world title shot and how hard I’ve worked for it. I can almost touch it now and there’s no way I’m going to take my eye off the ball with someone as dangerous as Schwarzkopf standing in my way.

“I’m going to make an example of him. It’s my chance to send another message to the 140lb world champions. None of them should be getting comfortable because once I win one of the world title belts, I’m coming for the others.

Catterall eager to fight in Dubai

“I can’t wait to fight in Dubai as well. I’ve watched the shows MTK Global have been putting on there and it’s an upcoming and exciting place to box. It’s very much a global sport these days and I’m looking forward to showing a new audience what I can do.”

MTK Global Professional Development Coordinator Jamie Conlan said: “This is a great opportunity for Jack, who everyone knows is already a world-class fighter and has been for some years.

“It’s also a great opportunity for the people of Dubai to come and see such a star in a high-level match-up – and of course, there’ll be plenty of people tuning in in both America and around the world to see what kind of threat Jack poses to the elite at 140lb.”

Catterall’s promoter Frank Warren of Queesnberry Promotions added: “It’s important we keep Jack busy while we wait for the outcome of Jose Ramirez vs. Viktor Postol.

“Jack is more than deserving of his world title shot, for two belts no less, but Timo is a solid opponent and there will be no room for mistakes come November 22.”

Chorley’s Catterall, who has held the WBO Inter-Continental title since March 2015, was last in action in April when he served up a devastating third-round stoppage of Oscar Amado