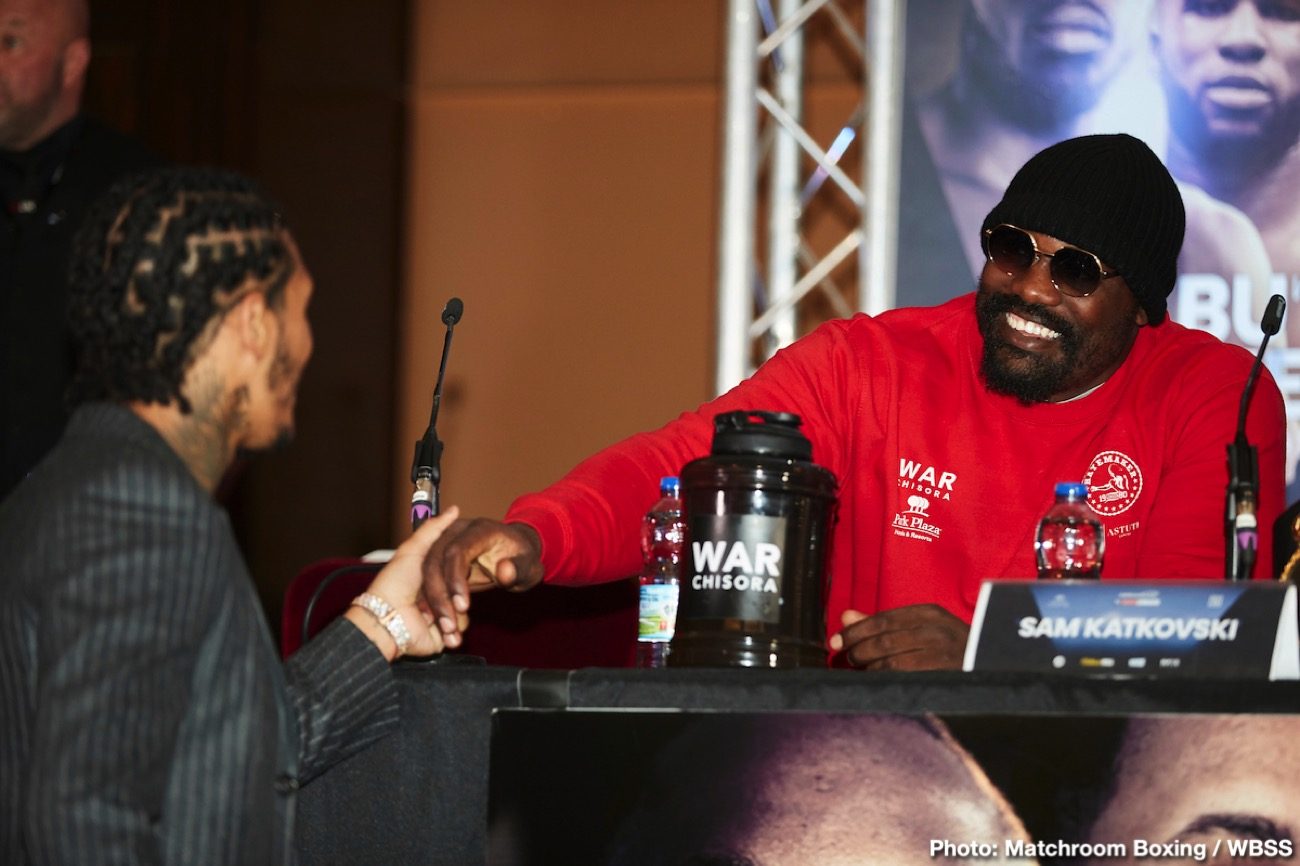 By Tim Royner: David Haye says Dereck Chisora will be changing trainers for his next fight against Joseph Parker on October 26 on Sky Sports Box Office.  Chisora (31-9, 22 KOs) won’t be using Dave Coldwell as his trainer due to a “logistical issues,” as he can’t make the trip to London. Chisora’s fight with former WBO heavyweight champion Parker (26-2, 20 KOs) is taking place at the O2 Arena in London, UK.

Chisora loses it during press conference

With the meltdown by Chisora during today’s news conference in London, it’s up in the air whether he’ll fight next month. Chisora made it clear that he’s unhappy battling Parker on the undercard of Regis Prograis vs. Josh Taylor on October 26. Dereck says he’ll pull out of the card unless Matchroom Boxing promoter Eddie Hearn increases his pay for the bout with Parker. Chisora vs. Parker is unquestionably a big enough match-up to be a headliner.

“Dave Coldwell will no longer be training Derek due to a logistical reason,” said Haye said to Sky Sports News. “We know what Parker brings to the table. For me, Derek getting that win over Parker is more than just a win. It catapults him up amongst the top players.”

Chisora would have his work cut out for him against the 27-year-old Parker regardless of who trains him. Unless Chisora can rough Parker up like Dillian Whyte did, he’s likely to lose the fight. Whyte got credit for a knockdown against Parker in which he head-butted him in the 2nd. The remainder of the fight, Whyte roughed Parker up, and got away with countless fouls. Chisora can possibly beat Parker if he roughs him up like Whyte did, but it’s going to be tough. Parker isn’t going to cave in like Chisora’s last opponent Artur Szpilka did. He can take a punch, and his boxing skills are above that of Chisora’s.

“Dereck wanted the big fights, and now he’s got it,” said Haye to IFL TV. Joseph Parker, he’s the only guy to Andy Ruiz Jr. People thought his [Chisora] last fight against Artur Szpilka was his coming out party. This will truly be someone in his prime, someone who is ready, and someone the odds will be in his favor in this fight. But Dereck wants to rip up his script. I think he was irritated for the fact that he was on the undercard. I get where he’s coming from. Obviously, he believes he’s the top dog on the show, although there’s no world title fights. That’s his opinion, and that’s how he feels. As far as I’m aware, it’s not an issue, but it’s an issue with him.

Hopefully once he calms down a bit, and we get in the gym later. He’s ready for war. He’s ready to go. And he’s carried his training on [from previous fight], and I don’t think he’s ever been this fit this far out. so he’s got all this energy that he normally doesn’t have this far out, and it kind of manifests in a strange way to everyone else. The intensity he was showing up there today was the intensity he was showing in sparring, and that’s what we actually want. No one comes to see Dereck Chisora, because he’s a fun guy to interview. He comes to war.