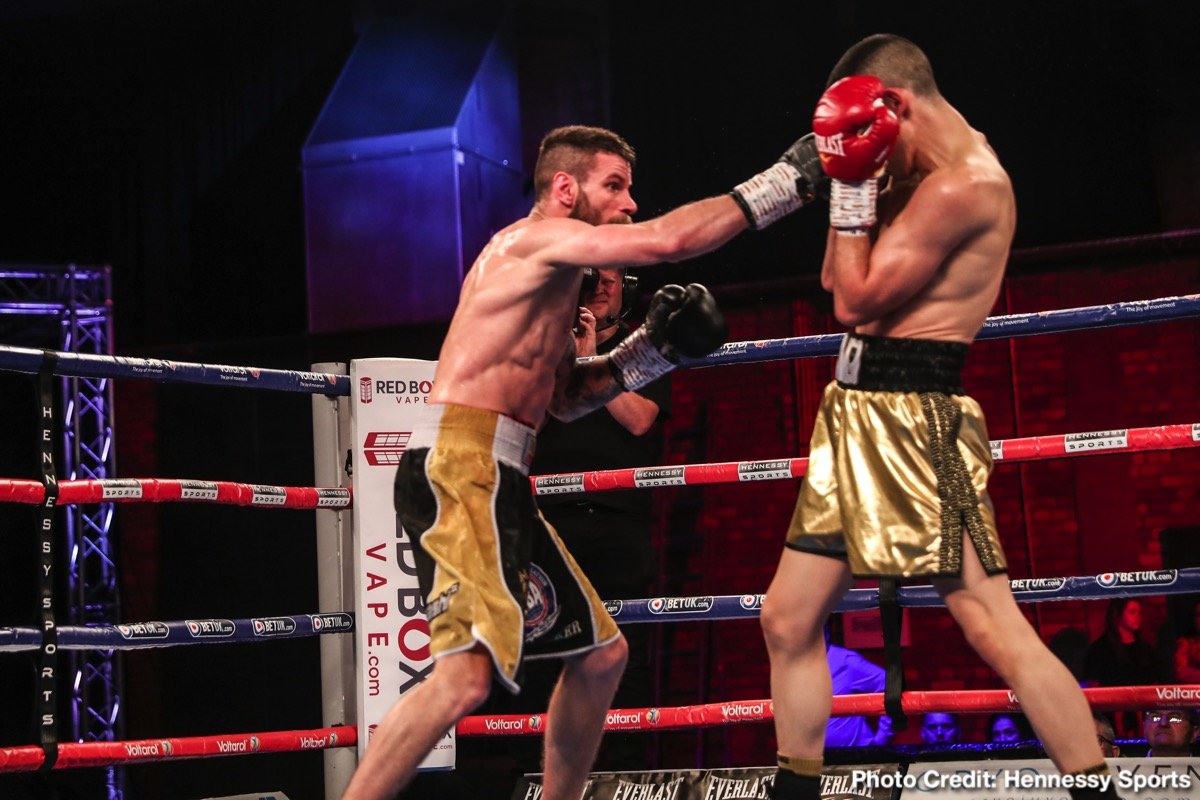 After boldly introducing himself to the British boxing public with a sizzling stoppage of Slovakia’s Martin Parligi, who had never been stopped, in late May, classy Crayford super-featherweight Alex Dilmaghani aims to gatecrash the top end of the world rankings when he squares off with dynamite-punching and two-time World Challenger Francesco Fonseca in a world grade shootout at the Premier Suite, University of Bolton, on Saturday 28th September.

Presented by Hennessy Sports and VIP Promotions, in association with Infinitum and Voltarol, Dilmaghani v Foneseca is exclusively live on free-to-air Channel 5 this Saturday from 9pm.

Nicarguan Fonseca, a former two-time IBF title challenger, has sent 19 of his 25 victims for an early shower and is sure to harbour world title aspirations of his own. He promises to present the litmus test that the much avoided Dilmaghani has long coveted.

‘Plenty of others collect high world rankings by picking up meaningless paper titles without actually fighting anyone of note. But that’s certainly not what I’m about,’ declared dazzling ‘Dilma’, 28, who destroyed hardman Parligi in eight in a sensational homecoming at Manchester’s Victoria Warehouse, having served a blue-chip five year ring apprenticeship in North America.

That sizzling showing cornered critical acclaim from the cognoscenti and now the 29 year old Anglo-Iranian is salivating to go again, against even stiffer competition.

‘I don’t view Fonseca as a big threat. It’ll be just another day to me,’ states super confident Dilmaghani.

‘Last time, I dominated a good guy who had a very undervalued amateur pedigree – Martin once beat Andrew Selby – and he’d only lost twice, both by marginal decision, in 28 pro fights. And I didn’t just beat him up, I stopped him in first gear. He quit on me before I could hit second gear! Parligi was supposed to be a huge step up for me but it proved an easy night.’

That stellar showing not only revealed Dilmaghani as one of Britain’s best kept ring secrets but also alerted fans of his intriguing background story that saw him raised by his mum, combat racial prejudices, graduate in law at Southampton University, then master his craft in the sweat shop gyms and fight clubs of Mexico and Canada.

He says: ’The fight was shown live on network tv and I’ve had a lot of great feedback since.

‘A lot more people are keen to communicate with me now. I’m a humble guy who knows what comes with success but I prefer to keep my circle small.’

Whilst his silky southpaw skills are significant, the Redhill born rumbler believes it’s his agile mind that distinguishes him.

‘I’m a relatively educated, meticulous person and, if I set my mind to something, it gets done. I’m very, very serious about boxing. It isn’t a game to me. I don’t just seek to win, I look to dominate, be impressive….and that’s a mentality every great fighter should have.

A few may work as hard in the gym but they don’t study the game as intensely as I do. I live and breathe boxing. I’m OCD with it.

‘Going from my spars and fights thus far, I have supreme confidence in what I can do. Apart from sparring the great Juan Manuel Marquez at his Romanza Gym in Mexico City years ago, when I was a young apprentice, I’ve never been inside a ring with anybody who I felt was comfortably better than me. I’ve sparred against some big names and let me tell you they found it difficult to handle the intense pressure when I put on them. I just take one fight at a time but I know I’m on the right path to becoming a world champion. ”

Mastered just once in 21 and presently undefeated in well over eight years, the smooth but spiteful southpaw – five stoppages in his last seven – knows that victory over the formidable Fonseca will catapult him to the cusp of the major world title fight he craves.

He concludes: ‘The beautiful thing about this fight is, after years of being overlooked, when I crash the ratings after taking care of Francisco, one of the world champions could be stupid enough to choose me for a voluntary!’

Britain’s best kept boxing secret until late May, classy Crayford super-featherweight ace Alex Dilmaghani is fast evolving into one of the hottest trends in the ‘hit’ parade as he heads towards his showdown this Saturday (28 September) against dynamite hitting Francisco Fonseca at the Premier Suite, University of Bolton, exclusively live on Channel 5.

Since returning to Blighty following a five-year exile mastering his craft at the fabled Romanza Gym in Mexico City, prime time terrestrial TV slots and glossy spreads in the trade papers have suddenly alerted the cognoscenti of the slick and speedy 28 year old southpaw’s soaring talent and colourful back story.

Latest to seek his testimony were talkSPORT’s Fight Night presenters Adam Catterall and Gareth A.Davies who invited ‘Dilma – who is unbeaten in over eight years ago – to serve as their study guest last week.

The 19-1- 1NC starlet, who has stopped five of his last seven, opened up by explaining the circumstances that led to a Southampton University graduate jetting 5,500 miles to enrol at one of the most savage fight facilities on the planet.

‘Initially, I only went out on holiday, I made great friends out there, a second family. It was only after I finished my degree (2013) that I properly took (boxing) seriously and moved out to Mexico.

‘At Romanza, they were expecting a blond, blue-eyed boy but I looked more Mexican than they did,’ continued the Redhill-born rumbler who served as a spar hand to a stream of world champions, most notably Juan Manuel Marquez, the legendary seven-time, four weight world champion.

‘There, I engrossed myself in the boxing culture. There’s a gym on every corner. Training, sparring, was like a fight. Sparring before (Mexico’s legendary octogenarian Hall of Fame trainer) Nacho Beristain, you’d not want to mess up. He’s very critical, a perfectionist. If you missed a punch, he’d call out ‘You Imbecile. Do it again.’ He never got to call me an imbecile!

‘It was like a university, more like going to school than going to the gym. I learnt my trade; the fundamental principles of the techniques plus the attitudes.

‘In that gym, not only were there world champions but also plenty of hungry guys. As Nacho’s time was limited, we’d all spar heavy, fighting for his attention, trying to impress him. There’s a term, ‘iron sharpens iron’.

‘And they had the best weigh-ins in the business, open air with palm trees in the background. Unbelievable.

‘At the Romanza, I started to change my style. Mexican fight fans don’t appreciate a ‘stand-off’ style. At live events, all the fights are toe-to-toe and if one fighter takes a breather, the crowd starts booing!

‘As a foreigner, fighting out there, I needed to bring it, come forward, adopt a Mexican style, put my shoulder and hips into punches. ‘Nacho’ showed me the techniques. ‘Nacho’ teaches a very unique style to all his guys, different to the other Mexican fighters. He has the lead hand up and the back hand slightly lower….he favours combinations and feints.’

This Saturday, at the White’s Hotel in Bolton, dazzling Dilma gets a golden opportunity to bulldoze his way into the sanctioning bodies’ world rankings when he gambles against Nicaragua’s ultra-violent Fonseca – a 25 year old two-time IBF world title challenger who has sent 19 of the 25 conquests on his ledger down the trap door before the scorecards were called.

The top graders clash from the Vacant WBA International 130lb title but, even if he prevails, Alex informed the radio presenters that he didn’t discount a dip down to featherweight, if the right fights at the right price present themselves.

‘I can make featherweight or super-featherweight, I just want the fights, the money,’ he stresses.

‘Mick (Hennessy, his manager-promoter) offered this fight (date) to plenty of people and you’d not believe how many turned it down, from British champions, European champions, Commonwealth champions. I can’t name, names, that’s for Mick. All were offered the fight but they didn’t want it.

‘But I can make feather. That’s one option. Right now, (more than a week before the fight), I’m 132lbs (9st 6lbs, just two pounds over the super-feather cut-off). I make (super-feather) easy. Boxing’s a lifestyle to me. I don’t have training camps. Training camp is all year round. After a fight I’ll take just a few days off, then I’m back on it.’

Regarding the decision to return to the land of his birth, Dilma informed talkSPORT listeners:

‘England is the number one place for boxing, along with US. The money’s here, the TV’s here. I teamed up with Mick Hennessy. He’s a great guy and we’re doing great things.

‘I’ve got a lot of great friends in Manchester. There’s a lot of educated fight fans there plus some good food places in the food quarter to check out. It’s always a pleasure.

‘Channel Five is the best platform in boxing. The TV figures (for boxing) are unbelievable. And it’s a great card from top to bottom.’

And while this Friday’s South American co-challenger has only conceded to high grade US world champions Gervonta Davis and Tevin Farmer during his 28 fight, six year paid career, when grilled about the lethal hitting Latino, Dilma casually responded:

‘I know he’s going to get beat!

Chief support on the talent stacked card sees undefeated starlets Jack ‘The Giant Killer’ Flatley and Harry ‘Hammer Time’ Scarff fight it out over 10 rounds for the former’s English Super-Welterweight Championship. Bolton wonder Flatley, a former national amateur finalist at both junior and senior level, is yet to be beaten in 16 but the ex-England international can expect to be stretched right to the limit by 7-0 Derby six footer Scarff in a mouthwatering match-up.

Promoter Hennessy’s son, Michael Hennessy Jr, an all action middleweight who is undefeated in two, is set to feature in a six rounder.

A full undercard featuring several of Steve Wood’s rising talents is set to garnish an unmissable night of entertainment.

Passions are sure to run high when Darwen’s robust Mickey Ellison (9-2) locks horns with Manchester technician Charlie Schofield (unbeaten in 16) in a seriously spicy looking Eliminator for the English Super-Middleweight Championship.

Popular Wigan welterweight James Moorcroft and Oldham’s turbo charged Andy Kremner will be banking to triumph in separate six rounders before clashing against each other back at the Bolton Whites in December. The former goes up against Manchester circuit fighter Sam Omidi whilst the returning Kremner seeks to become the first to stop Cannock tough man Lee Gunter.

Prestwich pressure fighter Sean Ben Mulligan, beaten just once in 11, endeavours to edge yet further up the domestic super-welter rankings by prevailing in a Roses rumble with 71 fight Driffield warmonger Danny ‘Lethal’ Little.

Stretford’s Bradley Rea, Wigan’s Andrew Fleming and Stockport’s Jack Booth are three local lads who’ll be seeking to extend their perfect slates. Middleweight Rea, described as ‘a serious talent’ by promoter Wood, will be hoping to go seven-up in an Anglo-Scottish affair with Stranraer’s significantly more seasoned Paul Allison. Also over six, Fleming, a strong super-lightweight southpaw, intends to stretch his streak to eight against an opponent still to be announced while Matthew Hatton’s all-action super-middle starlet Booth will be looking to defuse ‘Baltic Bomber’ Genadij Krejevskij from Lithuania in an intriguing international four-rounder.

« Golovkin: Derevyanchenko is a dangerous fighter

“Daniel Dubois Has The Jab Of Larry Holmes” – Frank Warren »