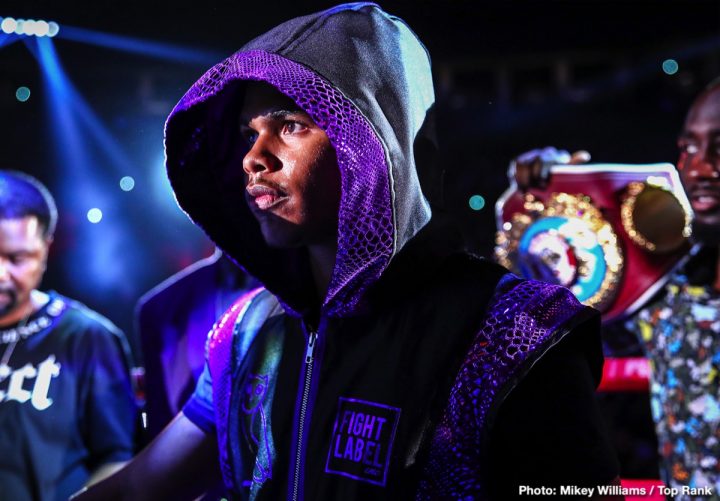 By Kenneth Friedman: The WBO officially ordered Shakur Stevenson and Joet Gonzalez to begin negotiations to fight for their vacant featherweight title that Oscar Valdez gave up. Stevenson (12-0, 7 KOs) and Gonzalez (23-0, 14 KOs) have 30 days to negotiate the fight until September 5 before a purse bid.

Stevenson is looking scary good lately in beating Christopher Diaz, Alberto Guevara, Jessie Cris Rosales and Viorel Simion. Shakur would be hard for Valdez or anyone to beat at this point at 126, aside from perhaps Gary Russell Jr. or Leo Santa Cruz.

The 25-year-old Joet Gonzalez has looked sensational lately with impressive victories over Rodrigo Guerrero, Manuel Avila, Rafael Rivera and Rolando Magbanua. Gonzalez has flown under the radar screen due to his fights taking place in Mexico, but he’s someone that has a shot against Stevenson. One can’t rule out a victory for Gonzalez against Stevenson.

Fans aren’t surprised that the Top Rank promoted Valdez (26-0, 20 KOs) gave up his World Boxing Organization 126 pound title rather than defend it against the young  22-year-old 2016 Olympic silver medalist Stevenson, because that would have been a difficult fight for him. That would have been a rough fight for Valdez, who has been matched softly by his promoters at Top Rank since his war with Scott Quigg last year in March 2018. Quigg took a lot out of Valdez in breaking his jaw in the fifth, and landing a lot of punishing blows.

The plan for Valdez is to move up to super featherweight to challenge one of the world champions in that weight class. It’s believed that Valdez will immediately take on Top Rank fighter WBO 130 pound champion Jamal Herring. It was always going to be a long shot for Valdez to defend against Stevenson, because they’re with different promoters. It’s unclear if Valdez’s promoter Bob Arum of Top Rank advised him to give up his WBO featherweight belt or not.

With Arum having two of his Top Rank fighters in Miguel Berchelt [WBC] and Herring [WBO] holding titles at super featherweight, it made it an easier decision for Valdez to relinquish his WBO 126 pound title. If it were up to the two-time Mexican Olympian Valdez to decide, he would defend his WBO title against Stevenson. Valdez is a warrior, but he’s taken a pounding in some of his fights in the last two years. Miguel Marriaga, Quigg and Genesis Servania all had Valdez in trouble at times in their fights against him.

Valdez vs. Berchelt makes a lot of sense

A fight between Valdez and Berchelt would be a big one if Top Rank is willing to throw those two guys in with each other. The easier path for Valdez would be to take on Herring for the WBO belt, but there won’t be as much interest from casual boxing fans. Herring isn’t viewed as the same type of talent as Berchelt.

Valdez has got to show that he can thrive at super featherweight, because he’ll be facing bigger punchers in this weight class than at 126. At featherweight, Valdez was the 900 pound gorilla in his fights. That won’t be the case at 130.


« Ruiz fires back at Joshua, dares him to fight in Mexico