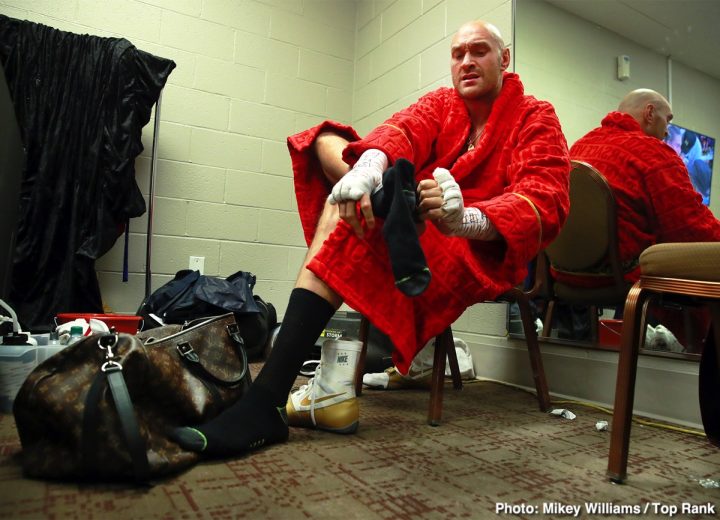 By Allen Fox: Tyson Fury responded back to WBC heavyweight champion Deontay Wilder’s trash talk from last night by sending a kiss to him, and calling him jealous on social media. Wilder (41-0-1, 40 KOs) gleefully ridiculed Fury following the Adam Kownacki vs. Chris Arreola fight at the Barclays Center in Brooklyn, New York.

Wilder has a lot to work with in taunting lineal heavyweight champion Fury (28-0-1, 20 KOs) with the news of the British fighter facing Otto Wallin (20-0, 13 KOs) in his next fight on September 14 at the MGM Grand in Las Vegas, Nevada. Wallin, who comes from Sweden, has an impressive 20-0 record, but his wins have come against poor second tier level opposition throughout his six-year pro career.

Although the records for Wilder and Fury both contain a lot of dreadful opposition, Deontay is currently fighting the far better guys now. In Wilder’s last contest, he defeated mandatory Dominic Breazeale by a first round knockout last May at the Barclays Center in Brooklyn, New York. In contrast, Fury stopped Tom Schwarz by a second round knockout on June 15 in Las Vegas, Nevada. Schwarz looked like a guy that didn’t belong in the top 100, let alone at #2 with the World Boxing Organization. Breazeale would likely destroy Schwarz if the two of them fought.

Wilder will be defending against former world title challenger Luis Ortiz next on November 9. Ortiz is clearly a much better fighter than the 6’6′ Wallin.

“He keeps pulling out all these night shift graveyard workers… Bulls*** at it’s best.,” said Wilder. “No Englishman’s coming over here, saving America with Tom Schwarz and Otto whoever he is, talking about ‘he’s the best’ with an invisible belt.”

“The deal is done,” Top Rank Boxing promoter Bob Arum said to BBC Northern Ireland about the Wilder vs. Fury rematch. “But like anything else in boxing it could be an undone deal. Each of these guys are having an interim fight for whatever reason I can’t fathom. Wilder is fighting Ortiz who had him in trouble the last time they fought and Fury is fighting this big Swedish kid in September. Hopefully, they get by, win their fights. Then we have a date already and we have two networks that are going to participate in this event. Everything is set but one of these could end up losing.”

Arum could have made the rematch between Wilder and Fury last May if he’d wanted to but he chose instead to match Tyson against Schwarz.