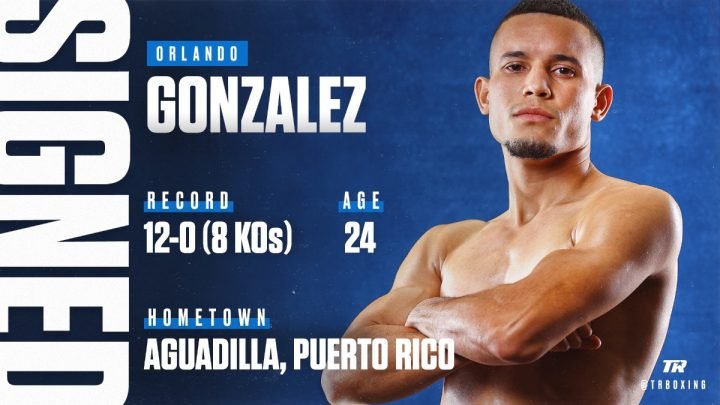 From Aguadilla, Puerto Rico, Gonzalez is 12-0 with eight knockouts, most recently scoring a six-round unanimous decision Aug. 2 over Aldimar Silva in Kissimmee, Florida.

“Signing with Top Rank represents the best opportunity for my career and to expose my talent to the world,” Gonzalez said. “I have enough experience because I had 178 amateur fights. I achieved a lot during my time with the Puerto Rican national team, which prepared me to become a professional.

“In my last fights, I have had to implement a rigorous, strong and high-pressure style. However, I am ready when I have to demonstrate my technical arsenal.

“Now, more than ever, fans can expect the best from me. Everything has been part of a plan, and thank God my time has come to shine on the biggest stages.”

Said Top Rank matchmaker Brad Goodman: “Orlando is a very well-schooled young fighter who we expect big things from in the coming years. Like Henry Lebron, we believe Orlando has everything it takes to become a world champion.”

A three-year pro, Gonzalez turned pro following a 162-16 amateur campaign that included a gold medal at the 2012 Pan American Youth Championships. Gonzalez is a versatile southpaw who made his most emphatic statement May 25 on the Jamel Herring-Masayuki Ito undercard, knocking out Roxberg Patrick Riley (13-1 at the time) in the third round.

21-year-old Wahab was born in Nigeria, but fought as an amateur for Ghana, where he was a three-time national amateur champion. He was mentored by Ghanaian great Azumah Nelson, who is widely considered the greatest African boxers of all time and trained by Nelson’s brother Charles.

Wahab has fought his entire professional career in Africa but will soon relocate to Las Vegas where he will work with another great former champion, Eddie Mustafa Muhammad. He was scheduled to make his US debut against former No. 1-ranked U.S. amateur Abraham Nova (12-0, 10 KOs) in an eight-round super featherweight bout February 1st of this year on ShoBox: The New Generation, however, this bout never materialized due to immigration delays. He’s scheduled to make his next appearance in Harare, Zimbabwe, before making his US debut later this year.

“I’m honored to have gained such important American representation,” said Wahab. “My goal is to come to the United States and train among other world-class boxers. I will be Africa’s next great champion.”

“I feel great about this deal for Oluwaseun,” said Aiyelabowo. “I’ve been working with Greg for years and it’s a really a pleasure to bring a top talent to GCP. Oluwaseun is definitely one of the top-five talents in his weight class. That’s why he’s coming to America. Azumah has worked with him to this point and now he has his blessing to go ahead and conquer the world.”

Greg Cohen, known for discovering and developing unknown talents into champions, says his newest prospect is also his next coup in the world of boxing.

“Oluwaseun Joshua Wahab is a beast,” said Cohen. “He’s going to be unstoppable when he gets over here. I’ve been working with Nelson Aiyelabowo for many years and he and I both agree this is the next African superstar. I’m very proud to be working with him and his team and the boxing world should be getting ready for ‘The Machine.’”